White and magenta with black sclera

A maternal force for evilkind. Let them live and they'll only make trouble.

The Big Mother (ビッグマザー, Biggu Mazā?) is a mini-boss that appears in the nighttime Stages in Sonic Unleashed. They are a colossal and bulky variant of Dark Gaia's Minions. One of the most powerful of their kind, the Big Mothers get their name from their ability to create Red Rexes and/or Little Rexes.

The Big Mothers are very large creatures, about four meters tall, with oxford blue and cyan skin with magenta glowing markings. They have a goofy look, and a large belly with a large mouth stretching across it. They have rather large feet, with the upper parts of their legs covered by their stomachs, and long sleek arms. They have no visible neck, curved spike-shaped appendages on their shoulders and upper backs, and horns on their forehead.

The Big Mothers and the rest of Dark Gaia's Minions came into being when Dark Gaia broke apart at the beginning of Sonic Unleashed due to its premature awakening by Dr. Eggman. These fragments were then spread across the earth and became Dark Gaia's Minions, with the Big Mothers amongst them. They first appear in Rooftop Run Night Act 1 on the Xbox 360/PlayStation 3 version, and in Jungle Joyride Act II: Restless Coastside on the Wii/PlayStation 2 version.

As a mini-boss, the Big Mothers are some of the toughest enemies in Sonic Unleashed. They have large health and their attacks can deal large amounts of damage. They also only flinch when hit by Sonic the Werehog's strongest attacks, meaning they can execute their movements almost without fail. However, they are rather slow, making their moves easy to read. When combating Big Mothers, an advisable strategy is to strike when they are not doing anything, and run away or Guard when they attack.

When fighting the Big Mothers, they will try to create up to 6-8 Little Rexes/Red Rexes to distract and overwhelm the player, though they also have attacks of their own. In the Xbox 360/PlayStation 3 version, the Big Mothers attack either by using their arms as clubs close up or swinging them around in a circle while stretching them out across a wide area, the latter which can damage enemies as well. If the player is hit by either attack, Sonic will be immobilized until it either wears off or by the player rapidly pressing the jump button. In the Wii/PlayStation 2 version, the Big Mothers can only attack by hammering their fists into the ground to create shockwaves, though they can be dodged by jumping.

Upon the reconstruction of Dark Gaia by Dr. Eggman, all of the Big Mothers (along with the other types of Dark Gaia's Minions) were returned to the beast, who was later defeated and sealed within the planet's core.

The Big Mothers are able to move around by emerging from black puddles on the ground. As a Dark Gaia minion, the Big Mothers can possess people by latching onto the deepest, darkest part of the heart, and generate despair, negative emotions or even erratic behavior that are completely opposite to the person's personality.

Being one of the toughest members of Dark Gaia's Minions, the Big Mothers are powerful creatures in their own right. They possess large amounts of physical strength, enough to send shockwaves through the ground by hammering their fists into it, and immobilize even Sonic the Werehog through the brute force of their strikes alone. Due to their large size, the Big Mothers also have large amounts of physical endurance, enough to be completely unfazed when hit by most of Sonic the Werehog's attacks.

Like the Nightmare variant, the Big Mothers possess elastic arms, allowing them to stretch their arms over a larger area to increase their attack range.

The Big Mothers' signature skill is their ability to produce the Rex variant of Dark Gaia's Minions (Little Rexes on the Xbox 360/PlayStation 3, and Red Rexes on the Wii/PlayStation 2) by spurting them from the large mouth on their stomachs. These mouths can also eat up any thrown objects, though the Big Mothers are still affected by the effects of the objects, such as the force created from explosives detonating inside their bodies. 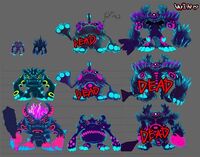 Different designs for the Big Mother.