The Big Icedus, from Sonic the Hedgehog 3.

The Big Icedus[1] (ビッグアイスダス[2], Biggu Aisudasu?), also known as the Iceball,[3] or Snowball,[4] is a character that appears in the Sonic the Hedgehog series. It is a robot created by Dr. Robotnik, who used it during the first part of the Angel Island incident.

The Big Icedus is a floating frosty machine with a gray main body and three magnetic ends on the body's sides and bottom. It also has what it looks like two eyes and a mouth.

Some time later, a rebuilt Big Icedus would attack Knuckles in IceCap Zone. However, the echidna managed to defeat the robot.

The Big Icedus can fly. Using its magnetic prongs, it can also surround itself with snow blocks.

A frosty machine that can summon eight snow blocks for offense and defense. To defeat it, the player has to hit it six times.

After getting out of the cavern of IceCap Zone and into the cold outside weather, the player encounters the Big Icedus, which flies down into the arena. It then summons eight ice blocks from the snowy ground which it uses as shield to protect itself, and swoops down in a U shape across the screen once or twice. It will then launch the ice blocks into the air where they will eventually fall down to the ground. Depending where the Big Icedus is standing, three ice blocks will usually fall to the left side and two others will fall to the right side. The player cannot destroy the ice blocks and will take damage when touching them. After this, the Big Icedus will repeat its attack pattern again.

During the fight, the Big Icedus will be too high to reach at first. The best chance to hit Big Icedus is after it throws its ice blocks above the screen, as it is at this point where it is closest to the ground. However, the player can also hit it normally by using the Insta-Shield or the Double Jump granted by the Lightning Shield as Sonic at the right time or by flying as Tails. After six hits, the Big Icedus will be destroyed and the background will become brighter than before.

In Sonic the Hedgehog 3 & Knuckles, Knuckles will go through his own pathway to the lower part of IceCap Zone Act 1 and face the Big Icedus in a huge cavern. The battle is the same, except that it may take longer due to Knuckles' low jump height, which inhibits him from hitting the Big Icedus as often as with Sonic and/or Tails. 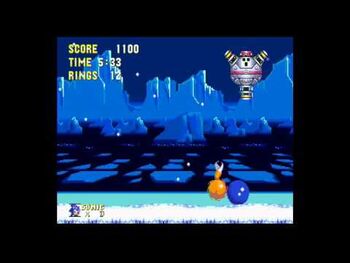