Big Arm, from the Nintendo 3DS version of Sonic Generations.

Big Arm (ビッグアーム, Biggu Āmu?) is a vehicle that appears in the Sonic the Hedgehog series. It is an alternate version of the Big Arm from another dimension set in the recent past.

Big Arm is a heavily armored, egg-shaped Egg Mobile. Significantly modified compared to the regular Egg Mobile, it possesses two big, mechanical arms on the sides. These arms are gray with red shoulder disks, wrists, finger surfaces, and knuckles. It also possesses a windshield and a red canopy with gray spikes on it. It has also two small red thrusters on its back and retractable spikes on its forearms.

Big Arm is able to hover or fly through the air using the thrusters on its back. Its arms also give this vehicle the ability to grab its opponents and throw them into the ground with lethal force, make powerful palm thrusts, and throw tremor-inducing punches.

Big Arm's early history was most likely largely the same as its mainstream counterpart.

In the Nintendo 3DS version of Sonic Generations, Sonic went back in time where he wound up fighting Dr. Eggman and Big Arm beneath the Death Egg during the time of the Angel Island incident. After Sonic beat Big Arm however, the Time Eater showed up and kidnapped Eggman while he was still inside his Big Arm.

Big Arm at the start of the battle.

A battle against Big Arm which the player has to fight in while taking control of Classic Sonic. Big Arm has two attack patterns which it selects depending on the Boss Health Gauge's level.

Big Arm is the boss of the Classic Era and the first boss of the Nintendo 3DS version of Sonic Generations. It can be fought with Classic Sonic after defeating Metal Sonic at Boss Gate 1.

During the first phase of the battle, Big Arms mostly attacks by aiming and launching its punch at the player. However, it is easy to avoid getting hit by it. By the time it is launching its fist, it will lower its cockpit, giving the player the opportunity to hit the downward part of its cockpit twice; one before it embarks its punch attack, and another after the punch is embarked. If the player fails to use these opportunities to deliver an attack on it, Big Arm will land aground and use its rocket to dash and hurt the player from the left to right and vice versa. After that, the Big Arm will return immediately to smack the player with its fist.

After four percents of its Health Gauge are depleted, Big Arm will change its pattern of attacks, initiating the second phase of the battle. Firstly, it protrudes spikes on its arms and will try to punch Sonic from the edges and center of the arena. After that, it will appear from one of the sides and attempt to catch and toss Sonic into the ground, causing the player to lose Rings. When this happens, the player has to jump to the other side behind Big Arm and move quickly toward it to damage the lower part of the cockpit using the Spin Attack. Continue using this opportunity to attack Big Arm will help the player finish the battle. 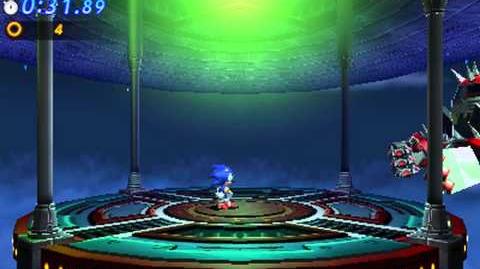