Ben Hurst was an American writer who worked as writer and story editor for Sonic the Hedgehog and Sonic Underground. He frequently collaborated with Patricia Allee.

Ben Hurst wrote one episode in the first season of Sonic the Hedgehog ("Sonic and Sally") in collaboration with Pat Allee, but for season two he became one of only three writers on the series (with Pat Allee and series creator Len Janson). In all, Ben wrote ten of the 26 episodes of Sonic the Hedgehog (four of which were collaborations with Allee), including some of the most popular episodes of the series, such as "Blast to the Past, Part 1" and "Part 2", and the finale episode, "The Doomsday Project". Hurst and Allee were also associate story editors for Sonic the Hedgehog.

Following the cancellation of Sonic the Hedgehog, Ben Hurst became active in the Sonic fandom, posting on websites such as the "alt.fan.sonic-hedgehog newsgroup" and revealing information about his plans for the unproduced third season of the show. He made several attempts to get the series renewed, but without success.

In 1999, Ben Hurst and Pat Allee were called to a 'cattle call' for writers on a new series, Sonic Underground. Although neither of them usually attend such meetings, they agreed to participate after assurances from the story editor that they would be assigned at least a few episodes. They were asked to write the pilot episode, which they did, after which Sega fired the current story editor and hired Hurst and Allee instead. Hurst and Allee attempted to remain faithful to the personalities of the characters that had been established in Sonic the Hedgehog, but were forbidden from making changes to the new direction of the show (Sonic's siblings, music, etc.). Hurst and Allee wrote the three-part origin story and several other episodes, and Hurst said that he made major (uncredited) edits to the scripts of other inexperienced writers that had been brought on board by the show's producer. Hurst also claims that a high point was assigning 6 scripts to Sonic the Hedgehog story editor Len Janson.

Following the cancellation of Sonic Underground, Ben Hurst became even more involved with the community, appearing for Q&As at both the 2005 and 2006 Sonic Amateur Games Expos. He was always more than happy to discuss his work with his fans. He passed away in August 2010 from complications relating to diabetes. 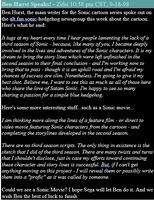 Retrieved from "https://sonic.fandom.com/wiki/Ben_Hurst?oldid=2333537"
Community content is available under CC-BY-SA unless otherwise noted.