"Beating Eggman, Part 2" is the thirteenth episode in the anime series, Sonic X. It first aired on 29 June 2003 and 29 November 2003 in Japan and the United States, respectively.

The episode starts with the President announcing to the citizens that the military are attacking Dr. Eggman's base. The ongoing warfare at Dr. Eggman's base continues as more fighter planes and battleships emerge as the base defenses continue to fend off the military invasion. Inside one of the fighter plane's missile storage, Knuckles awaits for the plane's pilot to fire a missile Knuckles is holding onto, allowing Knuckles to traverse the air and climbs onto the fortress tower's wall. Meanwhile Rouge and a special GUN force led by Topaz continues to infiltrate Dr. Eggman's base as their objective is to find the generator in the bottom of the base to set off explosives. They are however ambushed by an E-12 Behemoth and Rouge proceeds to fight it.

Back at Tingalin Villa, circumstances are not great for Tails, Amy, Chris and Frances due to Dr. Eggman's E-35 Funfun continuing to overwhelm the heroes with its powerful motor fan blowing a vicious gust against them since the previous episode. Frances nearly gets blown away only for Amy to catch her back down to the ground, After the robot successfully scoops the X Cyclone up into the air with Tails inside and crash-landing back down, the fox is left unconscious until he gets back to his senses when Funfun proceeds to crush the X Cyclone along with Tails under its foot causing Tails to scream for help. Just when the worst is about to happen, Sonic finally zooms to Tingalin Villa being somewhat unaffected by Funfun's gust and tackles against it, causing the robot to fall to the ground. Since the motor fan is still operational and is facing at Eggman, Funfun unintentionally blows him away. The motor then stops as Eggman ordered Funfun to shut off the motor. After thanking Sonic for saving them, Tails then continues to dig for the Chaos Emerald until Funfun gets back up. Sonic, however, with the help of Chris launching a Ring from the X Cyclone, disables Funfun for good. Tails digs and finally uncovers the Chaos Emerald only for Eggman to steal and escape with it. Just before the heroes set out on the X Tornado, Chris suggests that Frances should stay until Amy and Tails ask Chris if he's staying behind to which Chris answers he is not. The X Tornado take off to the skies and pursue the evil doctor.

Back in Eggman's fortress, Rouge continues to fight Behemoth and quickly asks Topaz to set an explosive charge on the robot and detonate it. The ground below Behemoth collapses and Behemoth falls into the hole. The situation is getting worse for Decoe and Bocoe to try and stop the military invasion and then realize that another aircraft is approaching the base. Without giving a second thought, the mindless robot henchmen quickly targeted the Egg Mobile only to realize that they are attacking their own master. Eggman sees the missiles fired by the military forces realizes that the President has ordered the attack at his base. Citizens continue to watch the fight and realizing that the X-Tornado is approaching the base. Meanwhile, Rouge, Topaz and the special forces team get ambushed by another E-12 Behemoth robot. Rouge distracts the robot while Topaz and the special forces team move on ahead, only for several E-13 Guardbot robots to appear and attack Topaz and the special forces team. Knuckles managed to smash his way in here though and destroyed the Guardbots. Knuckles then questions Rouge, Topaz and the special forces team's presence in Eggman's base and Rouge responded that they are here to sabotage Eggman's base. Knuckles doubts it would be possible unless he goes along, so Knuckles teamed up with the special forces to help locate the generator room.

At the same time, Dr. Eggman yells at Decoe and Bocoe for trying to attack him earlier and then turns his attention to Sonic, leaving his robot flunkies to hang their heads in shame and try to apologize for their blunder. Decoe and Bocoe then become nervous as they watch Eggman's seat transforming and the doctor tries to shoot down Sonic and his friends with multiple missiles in an erratic behavior. However, Tails' expert pilot skills evaded the missiles untouched and shot them down, leaving the crowd at Station Square cheering on for Sonic. Sonic jumps off the X-Tornado and smashed his way into the base. He runs into a room only to meet Eggman with his new robot, "E-18 Guerra-Hard" and the two fight. Meanwhile, the explosive devices planted in the generator room of Eggman's base has been set while Rouge tries to find the Chaos Emerald. Unfortunately for Rouge, Knuckles, Topaz and her special forces, Decoe and Bocoe locked the generator room trapping the group in and with no time to defuse the time bombs, it installs panic to the prisoners. Knuckles and Rouge tried to bust the thick, steel door open.

Sonic gets overwhelmed by Guerra-Hard, being kicked to the wall, then kicked to the ceiling and in attempt to counterattack, Sonic is grabbed by the powerful robot and is crushed against the wall. Eggman boasts that Guerra-Hard is powered by two Chaos Emeralds and then gets a phone call from Decoe informing that Knuckles, Rouge and the military forces are in the generator room. The hedgehog finally gains his fighting will and was able to smash right through the robot, nabbing the Chaos Emeralds in his hands and using their powers, Sonic destroys E-18 for good and smashes through in and out of the base including through the generator room where the prisoners are locked in, much to Knuckles' disgrace. The bombs finally detonate, creating a large, bright explosion that completely destroys the base but everyone including Sonic safely evacuated from it just in the nick of time. The crowd in Station Square cheered on, now acknowledging Sonic as a hero to the public. 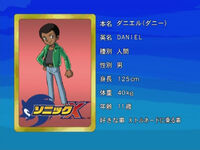 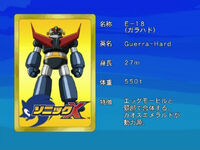 Comparison between the Japanese (left) and English (right) versions. Note that the picture below the President's screen is different due to the censoring of drugs in editing anime for English young viewers and thus the beer is replaced by cola.