"Beating Eggman, Part 1" is the twelfth episode in the anime series, Sonic X. It first aired on 22 June 2003 and 22 November 2003 in Japan and the United States respectively.

The episode starts with Sonic lying on the roof of the Thorndyke Mansion reading a book, noting that he has visited everywhere on Earth, apart from the places he has to swim to. Cream and Cheese are watching Next Show. After the show finishes, Ella gives the two a snack while a press conference by the President's aide, Jerome Wise, is broadcasted, in which he says that the President has decided to take action against Dr. Eggman. Dr. Eggman is watching this from his base and remarks that the humans will need a disaster management plan. Meanwhile, Knuckles is in search of a Chaos Emerald. Tails, Chris, Amy and Frances are in the X Tornado searching for the third Chaos Emerald. Chris is wearing a pair of new hi-tech goggles that were a gift from his teacher, Mr. Stewart. Unbeknownst to him, these goggles contain a tracking device and a microphone so that Mr. Stewart can hear what Chris and his friends are saying and knows where they are located. Mr. Stewart follows them in his car.

At the White House, Rouge, Topaz and the Captain are meeting with the President and two government officials. The President praises them for finding Dr. Eggman's engine room on their first mission and then reviews the military's attack plan. They plan a full-scale two-pronged assault against Eggman's base from both sea and air, which is merely a diversion to keep Eggman's forces occupied on the front of the base. Meanwhile, a special forces team led by Rouge will enter the base from the rear, infiltrate the power generator in hopes of cutting off Eggman's power supply. The President also wants Sonic's assistance in hopes of a greater chance to defeat Eggman by instead of forcing him, the President tries to seek his aid via a more diplomatic approach. An envoy led by the Secretary General Jerome Wise shows up at the Thorndyke Mansion, hoping to meet Sonic and ask for his cooperation. The President would reward Sonic, offer him and his friends citizenship and pay them for their services. Ella, who is at the house, denies knowing who Sonic is, but Jerome can tell that Ella is lying. Ella closes the door and Jerome attempts to open it. Ella returns with a bucket of water and throws it over Jerome before sending them away.

The incident was reported back to the White House, where the President announces that they are going to have to stop Dr. Eggman themselves without Sonic. Meanwhile, Mr. Stewart tracks the X Tornado flying towards a peculiar field. The Chaos Emerald reacts, and picks up a signal indicating another Chaos Emerald and turns while Mr. Stewart follows. He then emits a signal over to the government to remind that there's a Chaos Emerald. The X Tornado is seen landing in a dense corn field of Tingalin Villa. Thinking that the gang will have to walk, Tails then presses a switch and the plane transforms into a walking mech, the X Cyclone. Impressed, Tails claims the X Cyclone as an "all-purpose machine". They find the precise location where the Chaos Emerald is buried and asked Tails to use the X Cyclone to dig but Tails forgot to install a digging function into the X Cyclone so Chris and Frances run off to look for shovels or something to dig with.

The government decides to move for the attack if Eggman is gone to collect the Chaos Emerald, it will improve the odds in defeating Eggman, so the President agrees and gives the order to attack. Knuckles, who is watching the military forces preparing themselves, wanders what is happening. At the base, Eggman is watching a commercial when suddenly, he hears a report about the Chaos Emerald in Tingalin Villa. Dr. Eggman uses his Selection Machine and it selects E-35 Funfun, a large chicken-shaped robot with a giant fan in its chest. Eggman leaves the base in his Egg Mobile with Funfun in order to collect the Chaos Emerald. After watching the two depart, one of the GUN agents watching this radios the government to prepare the attack. The military's air forces start taking off into the sky. Meanwhile at Tingalin Villa, Tails, Amy, Chris and Frances proceed to dig when they hear something. Just then, a large shadow is casted on the ground and the heroes look up to see Funfun and Eggman. Tails hops into the X Cyclone, not intending to give the Chaos Emerald to Dr. Eggman if they found it.

The X Cyclone takes off into the X Tornado and flies towards Funfun. However, Funfun activates its powerful fan, which uproots the corn with a very strong wind that sends Amy flying and blows the X Tornado down to the ground. The current creates an opening in the field which reaches Chris and Frances and destroys the settlement ahead. Tails is unable to do anything to fight back while Chris' goggles are blown away, which leads Mr. Stewart away from the field. Meanwhile, the air force and navy begin bombarding Eggman's fortress, so Bocoe and Decoe launch a counterattack by sending some of their forces, mainly E-11 Beacon and E-14 Sneezer. As expected, the on-going battle provides a distraction for Rouge, Topaz and a special forces team to proceed towards the base. Back at the White House, the President announces on TV that a campaign against Dr. Eggman has begun. Cream sees the broadcast and rushes to tell Sonic. Back at Doctor Eggman's fortress, the on-going warfare continues out in the open sea while Rouge, Topaz and the special forces managed to infiltrate in the base. Back at the military base, Knuckles manages to sneak in into one of the fighter planes' missiles and awaits there for a while. Sonic and Cream find that Tails is missing, so they won't be able to fly to Eggman's fortress.

Mr. Stewart finds Chris' goggles, but Chris is nowhere nearby. Chris, Frances and Amy are still being pressed hard against the wind. The X Cyclone seemingly recovers and Tails shows his determination not to lose to Eggman but Funfun whips up an even more powerful wind, sending the X Cyclone and Tails flying. Mr. Stewart also feels the powerful wind and contacts the Thorndyke Mansion anonymously. After the call, Chuck asks Sonic that his friends needs help and Sonic sets off to help them. 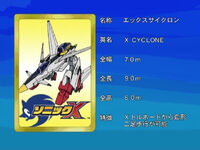 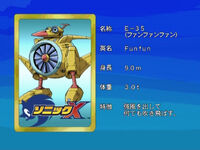 Comparison between the Japanese (left) and English (right) versions. Note the image Eggman, Decoe and Bocoe are looking at.