A battle in Battle Highway.

A set of roads in Central City.

Here, Emerl can find Shadow the Hedgehog in the game's Story Mode. This arena is located in Central City. Many battles against E-121 Phis are fought at Battle Highway during the story. The area is a series of roads and walls that connect to provide a fairly open area that still has places to hide from enemies.

Tails travels here with Emerl to try to get into Central Lab. However, he is not allowed in because he does not own a Lab Pass. Rouge then appears, and challenges them to a 10 KO battle. If they win, she will give them her Lab Pass. Tails and Emerl accept, and fight Rouge. They defeat her, and she gives them her Lab Pass. They then enter the Lab.

Later, Tails and Emerl return here, and are attacked by Shadow, who wants to destroy Emerl. Tails and Emerl defeat Shadow, and Rouge appears again to inform Shadow that Guard Robos are on their way. Shadow and Rouge then leave, and Tails and Emerl head off to find Sonic and Knuckles. However, to escape they had to destroy the Guard Robo blocking the office building. After doing so, the duo proceeded to Holy Summit.

Rouge travels here to find Eggman, who was hacking the government database for information on Emerl. Eggman sends a Phi to attack her which she defeats, gaining the Emerald Shard it was powered by. Eggman then retreats, and Rouge heads off to central lab.

Knuckles and Emerl pass by here on their way to Night Babylon, searching for the Phi robot sighted there. However, they meet opposition in the form of Chaos Gamma (Whom Knuckles believes to be the original E-102 Gamma). After they defeat him, Rouge appears, and explains that Chaos Gamma is a separate robot that merely resembles the original Gamma, and that Eggman sent him to extract revenge on Emerl for stealing his Chaos Emerald. Rouge then disappears, and Knuckles and Emerl head off to Night Babylon. 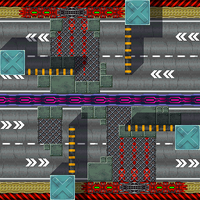 Battle Highway map.
Add a photo to this gallery