Template:Character Bat Brain, known as Basaran (バサラン) in Japan, is bat-type badnik created by Dr. Robotnik. It first appears in the original 16-bit version of Sonic the Hedgehog. These small badniks hangs on dark caves, waiting its victim to being bottom of it and attacks to him above.

Bat Brain, as its name implies, is a robotic bat that is commonly found roosting on high ceilings, their wings stretched over their bodies, showing only the tip of their blue head. Firm claws ensure the Badnik stays on the ceiling, until it finds a target in range, at which point it swoops down and flies using the engine on its back. Its wings, feet and engine are metallic gray in color, while its body is dark blue.

Bat Brain hangs on a ceiling, waiting for a target. When Sonic is spotted, it drops from its roost, unfolds its wings, and flaps towards him. It will cling onto another ceiling if it fails to do any damage. Bat Brain does not pose a huge threat and is easily dispatched.

Bat Brain makes its first appearance in 16-bit version of Sonic the Hedgehog, as it can be found underneaths of Marble Zone. It hangs above the player but it can easily recognized from cavern's roof sections. It lands quietly down and start to fly directly to the player. These badniks can be on the player's way, especially in challenging platforming sections. Bat Brain can easily be destroyed before or after the landing with Spin Jump.

After years later, Bat Brain makes appearance in 2012 remake of Sonic Jump, where these badniks can be found at Blue Sky Zone. It appears like it did in the original Sonic the Hedgehog, hanging platforms and clouds below, until it lands and start flying while the player is close of it. These badniks can only be defeated while spinning under of it.

Bat Brains have appeared in Fleetway's Sonic the Comic, being part of Doctor Robotnik's badnik army during his rule of Mobius. Because of different artist, Bat Brains appear sometimes slightly but also drastically different look.

In issue 3's story Mayhem in the Marble Zone, Bat Brain along with others have lead Tufftee's friends to pit in Marble Zone, who would later threat to drop Tufftee to the lava pool instead of crushing him. Because of Tufftee's strong nature, badniks instead send in Badnik Processing Badnik to deal with him until Sonic spins to the action and destroys all badniks (including Bat Brain), saving Tufftee and his friends.

During the comics run, at operating of Flickies' Island Robotnik started to build another model of Bat Brains, that are more round shaped and dreadful-looking. Both models have appeared during the New Robotnik Empire's invasion.

Bat Brain also appears in the Archie's Sonic the Hedgehog comics as at early issues being part of Robotnik's badniks. However in miniseries issue 2, Several Bat Brains and Buzz Bombers has been seen guarding Robotnik's airships, but were defeated easily by Sonic the Hedgehog. He's been one of badniks that has survived the longest time from Sonic. In issue 40 Bat Brain was second badnik that Sonic encounter at Robo-Hobo Jungle. Like many others, it gets kicked out.

Drastically different, second model of Bat Brain appears in issue 146, as it is operated and sent by Doctor Eggman to inquire, spotting Bunnie Rabbot at the sight of the explosion, which happened recently and sends Metal Sonic to investigate. This Bat Brain model hasn't been seen since.

Bat Brain along with others has been seen at Island of Misfit Badniks in issue 170. Sonic arrives to the island and defeats all badniks there but only getting fighting against Pseudo Sonic. Bat Brain itself was behind behind the "Bighorn Challenge," which sank the whole island. After Sonic defeats the Pseudo Sonic, Bat Brain along with other badniks starts to plan revenge with enlarging Pseudo Sonic. Bat Brain was last of badniks to fight under Caterkiller's lead. It first gets hit by Bottlenose, second comes from Pseudo Sonic and gets later smashed by Big Fluke.

Numerous Bat Brain badniks appear in issue 226 during the Genesis arc., as Sonic, Sally, Antoine and Rotor arrives Marble Zone. As Antoine decides to hiding inside a temple cavern, only few seconds later running away out there and being attacked by Bat Brains, only each of them being destroyed by Sonic.

The toy company TOMY has released Bat Brain action figurine during the release of Sonic & Knuckles as it also includes a series of 21 Sonic figurines and these figurines came in packs of four under the Sonic & Knuckles label and were also released individually under a Sonic the Hedgehog label. 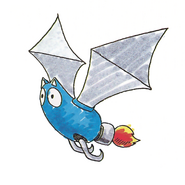 Retrieved from "https://sonic.fandom.com/wiki/Batbrain?oldid=859190"
Community content is available under CC-BY-SA unless otherwise noted.