Sonic the Hedgehog 2 (2013 remaster)
(only appearance)

Batbot,[note 1] originally referred to as BBat,[note 2] is an enemy that was going to appear in Sonic the Hedgehog 2, but was removed prior to its release. It later officially appeared in the 2013 mobile release of the game. Batbots are a bat-type Badnik model created by Dr. Eggman.

Based on real-life bats, Batbots have a gray torso, a black mouse-like head with round ears and black eyes, and wide gray metallic wings with gray claws at the joints. They also have a rocket exhaust instead of legs to aid them with flight.

BBats were originally going to appear in the Hidden Palace Zone, but the Zone and its Badniks were both cut from the final game. Regardless, BBats could still be found in the Nick Arcade and Simon Wai prototypes. Here, their attack pattern consists of hanging on ceilings until the player gets underneath them, upon where they swoop down in a U-shaped arc, ideally hitting the player at the lowest point of the arc. If the player dodges this attack, the BBats will fly in one place and repeat its attack from the other side.

In the 2013 mobile release of Sonic the Hedgehog 2 which restored Hidden Palace Zone, Batbots made their official debut. In this version, they retain their attack pattern from the prototypes. 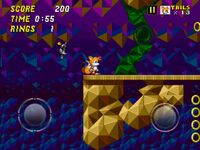