Not to be confused with the Item Box power-up, Bashosen.

The Bashōsen[1] (バショウセン[2], Bashōsen?, lit. "Banana palm fan") is an object that appears in the Sonic the Hedgehog series. They are a pair of war fans that serve as Jet the Hawk's main weapons.

The Bashōsens are a pair of fans that are made up of Jet’s feathers,[1] which are green with dark dark green tips, and wooden handles with a red strap on them.

Capable melee weapons, the edges of the Bashōsen fans are said to be razor-sharp.[3] With one fan, Jet can stir up tiny tornadoes powerful enough to blow opponents off course and disorientate them.[1] He can also use both fans in melee combat, either smacking his opponents or spinning them around to knock away anyone that gets too close.

In Sonic Riders, Jet pulls out a Bashōsen fan when he reaches level two in gameplay. At that level, he wields it to disorient his foe. At level three, Jet takes out a secondary fan and uses it in his off-hand to create a twister-like attack to stun the foe for an even longer amount of time.

In Sonic Riders: Zero Gravity Jet uses only one Bashōsen fan. In gameplay, he uses it whenever he gets an Attack item.

In Sonic Forces: Speed Battle, the Bashōsen (spelled as Bashosen) is an Item Box power-up exclusive to Jet. In this game, the Bashōsen is an offensive power-up that can be used to attack opponents. Upon dealing damage, it will also steal some of the opponent's Rings. This power-up can also be improved by leveling up the playable character.

In the Sonic the Hedgehog comic series and its spin-offs published by IDW Publishing, the Bashōsens are a pair of fans used by Jet the Hawk. Their past is virtually identical to their game counterpart's, up until after the events of Sonic Forces. With them, Jet can create strong gusts of wind to stun enemies and collect loot. 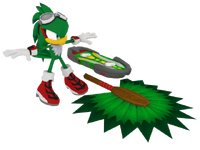