For other uses, see Balkiry (disambiguation).

A Balkiry, from Sonic Runners.

A battle plane type bird robot last seen in "SKY CHASE ZONE" from "Sonic 2". A whole bunch of them can be shot out of Metal Sonic's weapon unit, "Metal Carrier", in Episode II.

The Balkiry[2] (バルキーン[3], Barukīn?) is an enemy that appears in the Sonic the Hedgehog series. It is a mass-produced, bird/plane-based Badnik model created by Dr. Eggman.

The Balkiries' design is a hybrid of a bird and plane. Their red and gray metallic bodies have wings on each side, a vertical stabilizer and two rotors on their backs, which let these Badniks move at medium or high speed. Their heads also have small eyes facing the front and a yellow bird beak each. They also have two support legs each with small wheels that resemble eagle feet.

The Balkiries' appearance in Sonic the Hedgehog 4: Episode II is more detailed, as their support feet are here removed and it has received two extra wings on their vertical stabilizers. From Sonic Lost World onward though, the Balkiries once again retained their cartoony design from previous games, with the exception of their wheels which are not present on their feet.

The first appearance of this Badnik was in the 16-bit version of Sonic the Hedgehog 2, where it served as an enemy. This time around, this Badnik is referred to as Balkiry[2] (バルキーン[3], Barukīn?). In this game, the player encounters them in Sky Chase Zone, where the player controls Sonic with his Tornado that is piloted by Tails (and vice versa).

In gameplay, the Balkiry Badniks fly fast in the opposite direction of the playable character. At the beginning of the Zone, the Balkiry Badniks appear one at a time, but as the Zone progresses, they appear in larger groups of two or three, and at much faster speeds. However, the Balkiry Badniks have been given a simple pattern; they simply charge towards their target like a missile, from one side of the screen. As such, they are not particularly dangerous, although some of them tend to move quickly and can take the player by surprise. Also, upon their destruction, they will reward the player 100 points and release an Animal.

In Sonic the Hedgehog Pocket Adventure, the Balkiries return as enemies. They are only encountered in Sky Chase Zone.

In gameplay, the Balkiries have attack patterns similar to those they had in Sonic the Hedgehog 2, except they are now able to move in lateral directions, enabling them to follow the player should they dodge them. Also, upon their destruction, they will release an Animal.

In the Wii U/PC version of the game, the Balkiry Badniks appear as obstacles flying by in the skydiving sections of Desert Ruins Zone 2. In Tropical Coast Zone ? and Sky Road Zone 3 however, they charge from the right in string formations towards Sonic when he is maneuvered through the air, though the player can destroy them from above by performing the Spin Attack. Balkiry Badniks also appear in Hidden World Zone 2, where the player can only avoid them while piloting the Tornado.

In the Nintendo 3DS version of the game, Balkiry Badniks appear in Sky Road Zone 1 and 3. In Zone 1, they will charge forward until they come across the ceiling, wall or corner where they will turn around and head in the other direction. Here, the player has to destroy them to unlock a switch in a case. In Sky Road Zone 3 though, Balkiries will fly towards Sonic in different string formations, which the player can only avoid while controlling Sonic on the rocket.

In Sonic Runners, the Balkiries appear as enemies. In this game, they retained their design from Sonic Lost World. They are also some of the more common foes encountered in the flying type characters' stages. In gameplay, they charge from the right direction, and appear separately or in groups.

The player can destroy the Balkiries with any move or offensive power-up in the playable characters' arsenal. When destroyed, a Balkiry will grant the player 100 points.

Balkiries in Sonic Runners come in three types. Aside from the regular Balkiries, there are golden ones which grant 300 points when defeated, and silver ones that grant 200 points when eliminated and which only Color Powers, Invincible and the power type characters' dash attack can defeat. All three variations also contain Animals that are released when they are destroyed. The Balkiries also appear as part of several episodes' narrative, which features them being defeated time and time again by Team Sonic.

In Sonic Runners Adventure, the Balkiry Badniks appear as enemies. In this game, they retain their design from Sonic Lost World. The player encounters them in Sky Sanctuary.

In gameplay, the Balkiry Badniks slowly fly towards the player. Also, upon their destruction, they release an Animal.

In Sonic Forces: Speed Battle, the Balkirys appears as a Projectile Item that can only be obtained at random from Item Boxes by Dr. Eggman. They also retain the design from Sonic the Hedgehog 4: Episode II.

In the Nintendo Switch version of Mario & Sonic at the Olympic Games Tokyo 2020, the Balkiries appear as enemies in the "Tokyo Sky Flight" mini-game. Here, they have their sprite-based appearance from Sonic the Hedgehog 2. During the "Tokyo Sly Flight" mini-game, the Balkiries fly forward while firing projectiles at the the playable characters. However, they are easily destroyed with one gunshot from the Tornado. Also, upon destroying a Balkiry, the player receives 200 points.

Thanks to their design, the Balkiry Badniks are capable of flight at various speeds.

In the Sonic the Comic series published by Fleetway Editions, the Balkeries are a part of Dr. Robotnik's Badnik army, where they serve as the standard flying units among the doctor's military forces. Unlike most other Badniks in the series, the Balkeries' design remain fairly consistent during the comic's run.

In the Sonic the Hedgehog comic series and its spin-offs published by Archie Comics, the Balkiris are a part of the Badnik Horde in service to the Eggman Empire.

In the Sonic the Hedgehog comic series and its spin-offs published by IDW Publishing, the Balkiry is a mass-produced Badnik model in service to the Eggman Empire. Their past is virtually identical to their game counterparts', up until after the events of Sonic Forces. They also have another variety called Stealth Balkiries. 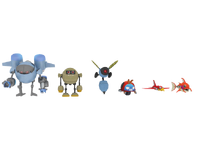