A group of Baku Bakus inside a bubble, from the Wii U of Sonic Lost World.

Baku Baku[1] is an enemy that appears in the Sonic the Hedgehog series. It is an unidentified breed of hairy creatures that reside in Hidden World.

Baku Bakus are creature with a spherical body and no limbs. They are covered in white fur with round brown spots and have a large jaw with a green inside. Additionally, their eyes are shaped like black crosses.

Baku Bakus are featured as enemies in the Wii U version and PC version of Sonic Lost World. In these games, they are only encountered in Hidden World Zone 4. In gameplay, these creatures appear inside bubbles that either remain in stationary positions or move around in linear patterns. While inside their bubbles, the Baku Bakus are constantly chomping. When the player lands on a bubble with a Baku Baku and leaps to another, the creature gets released and starts to slowly follow Sonic. Larger bubbles can contain five Baku Bakus at once, but they release the creatures in the same way. Some of these larger bubbles are surrounded by green slime bumpers that can deflect Sonic or iron balls.

A giant Baku Baku with white teeth appears at the mid-point of Hidden World Zone 4. This large creature functions as unusual mini-boss and it is mandatory to defeat it to clear the Zone. The creature comes in slowly from the left side of the screen and starts moving forward while chomping at a slow rate. Its large body pops all bubble around it and reflects iron balls. 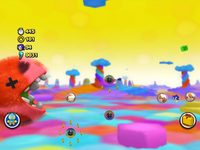