For other uses of the term, see Babylon Rogues (disambiguation).

The Babylon Rogues (バビロン盗賊団, Babiron Touzokudan?, lit. "Babylon Thieves") are a group that appears in the Sonic the Hedgehog series. They are a legendary band of thieves who have existed since ancient times,[2] with the mantle of the group being inherited from one generation to the next. Each member is a descendant of the ancient Babylonians, an alien race of genie-like beings that got stranded on Earth in ages past.[3]

In the present day, the Babylon Rogues consist of Jet the Hawk, Wave the Swallow and Storm the Albatross. In addition to being a talent and professional group of present-day thieves,[4][5] this trio is acclaimed world-wide for their Extreme Gear skills.[6] They also share an ongoing rivalry with Team Sonic.

According to legend, the Babylon Rogues were a band of technologically advanced thieves known as the Babylonians.[2][7] The Babylonians themselves were a group of genie-like aliens who got stranded on Earth in the ancient past when they were forced to disconnect the engine units called the Arks of the Cosmos, which were advanced stones capable of harnessing the power of a black hole, from the warp drive of their spaceship, the Babylon Garden, and send them into orbit around earth in order to keep their ship from generating a black hole.[8][9] Whether the Babylon Rogues were formed before or after the Babylonians landed on Earth is unknown, however.

In spite of having settled on Earth, the Babylonians still yearned to return to their home planet. Due to having left the engine units for the Babylon Garden in orbit however, all they could do was wait for them to fall down to the surface so they could use them to relaunch Babylon Garden into space.[8][13] As such, whenever the Babylonians saw a shooting star, they would wish to go back to their home planet.[8] Amy theorized that the Babylonians may have developed the tradition of wishing on shooting stars, believing that they would have looked to the night sky for the falling Arks of the Cosmos to return.[8] Eventually recovering two Arks of the Cosmos, the Babylonians would seal one away in the Gigan Rocks and the other in the Crimson Crater until it was time to relaunch Babylon Garden.[13]

Not too long ago, there was a group of Babylon Rogues whose members included Jet's father and Wave's father.[17][1] This group was eventually superseded by the current generation of Babylon Rogues: Jet the Hawk, Wave the Swallow and Storm the Albatross. Jet himself took over as leader of the team and received the Key to Babylon Garden from his father.[17] In time, these Babylon Rogues became a talented group of professional thieves and gained world-wide acclaim for their Extreme Gear riding skills.[5][6] Jet's revered skills as an Extreme Gear rider in particular earned him an impressive reputation, leading him to become known as the "Legendary Wind Master".[4]

In Sonic Riders, the Babylon Rogues met Dr. Eggman onboard their ship. After Eggman gave Jet info on how to use the Key to Babylon Garden, the group teamed up with him to get the Tresure of Babylon, which Eggman convinced them was a valuable gem. Jet, Wave and Storm thus undertook the task of gathering the seven Chaos Emeralds needed to activate the Key to Babylon Garden. In order to gather the Emeralds, Eggman hosted the EX World Grand Prix. To register for this competition, the contestants just had to pay an entry fee of one Chaos Emerald, and the winner got to claim them all. All the Babylon Rogues had to do was win this competition.

The Babylon Rogues soon stole a Chaos Emerald in Future City. During their escape from the police, they ran across Team Sonic. Although Knuckles got to clobber Storm and Sonic chased after Jet, the Babylon Rogues escaped. After the Babylon Rouges joined the World Grand Prix, Wave secretly put a bomb on Sonic's Blue Star while taking a look at it. She also took the opportunity to diss Tails. Storm later met Knuckles. Holding a grudge at each other, the two decided to settle it on the track. In the end, Knuckles eliminated Storm from the competition. Later, the Babylon Rogues reunited onboard their ship. There, Jet revealed that he suspected that Eggman was hiding something. As such, he sent Storm out to find out what he could. While Wave and Jet awaited Storm, Jet snuck away to taunt Sonic while he was practicing his Extreme Gear techniques. Soon after, Wave got eliminated from the Grand Prix when she lost to Tails. When Storm later showed up with Eggman's diary, the Babylon Rogues learned that Eggman had deceived them; the Treasure of Babylon was not a gem, but the Babylonians' technology, which he planned to use to conquer the world. Jet wanted to back out since he had no interest in Eggman's plan, but Wave convinced him that there was still profit to gain from the treasure. As such, Jet took part in the finals. When Jet stood to lose to Sonic though, Wave detonated her bomb on Sonic's Blue Star, thus allowing Jet to sweep in and claim victory. Having earned the seven Chaos Emeralds, Jet used them in tandem with the Key to Babylon Garden, thus making Babylon Garden rise up from Sand Ruins. While Jet was distracted though, Eggman took the key and headed to Babylon Garden himself to steal the treasure.

The Babylon Rogues pursued Eggman to Babylon Garden and eventually went after him on their Extreme Gears. While Jet ended up racing Sonic to Eggman's location, Wave and Storm were forced to escape Eggman's robots after running into Tails and Knuckles. In the end, Jet lost to Sonic, who gave the key back to Jet. When Jet refused Sonic's pity, Wave took the key on behalf of the Babylon Rogues, which Jet begrudgingly went along with. After the Babylon Rogues entered the treasury however, they were attacked by the Babylon Guardian. With the aid of Team Sonic and Amy though, the group managed to defeat the guardian and reveal the Treasure of Babylon, which turned out to be a Magic Carpet, much to the disappointment of Eggman when he arrived to steal it. Regardless, the Babylon Rogues and Team Sonic were fascinated by this advanced piece of fabric, which made Jet conclude that the Babylon Rogues were descendents of genies. With the whole ordeal over and with their rivalry more friendly, Team Sonic and the Babylon Rogues parted ways, but promised to meet again to settle their score.

In Sonic Riders: Zero Gravity, a few months after the EX World Grand Prix,[18] the Babylon Rogues had arrived at the Gigan Rocks to procure an Ark of the Cosmos. Deactivating the trap protecting it, Jet managed to snag it from its pedestal. However, just as Jet and Wave wished upon a shooting star, the trap was activated when a meteorite crashed nearby. Fortunately, the Babylon Rogues were saved when Jet accidentally triggered the Ark of the Cosmos's gravity manipulating power. With it, Jet realized he now had the power to beat Sonic.

In Sonic Free Riders, the Babylon Rouges entered the second World Grand Prix hosted by a disguised Dr. Eggman as "Team Babylon" solely for the purpose of obtaining glory. Jet, however, was mostly motivated by his inevitable showdown with Sonic, who was in the Grand Prix too. As the team got interviewed, the members expressed great confidence.

In the first round, Team Babylon went up against Team Dark. As Team Babylon took the lead, sparks began to fly between the two teams in spite of the respect Jet and Storm showed their opponents. In the end though, Team Babylon beat Team Dark and advanced to the next round, where they stood to face Team Rose. Between the races, Team Babylon would mock their opponents. After more victories, Team Babylon beat Team Rose. Having made it to the finals, Team Babylon found themselves squaring off against Team Heroes, much to the satisfaction of Team Babylon's members, who looked forward to facing their respective rivals. When the time came for the final race though, Jet suspected that Wave had been sabotaging Team Heroes' Extreme Gear. After Team Babylon claimed their decisive victory over Team Heroes however, it seemed as if Team Heroes' had trouble with their Extreme Gear. Suspecting that his teammates had something to do with this, Jet demanded a rematch with Sonic in order to prove that he did not need dirty tricks to win, which was approved. After beating Team Heroes yet again, Team Babylon were declared champions. In addition, they looked forward to their next encounter with Team Heroes.

During the extra rounds, Team Babylon had their own fair share of loses too. At the end of the tournament, Team Babylon and the other teams came to the awards ceremony to collect their prizes, but Eggman made them have a final race against his "ultimate Gear-Jockey robot." After the race, Eggman revealed he had used the Grand Prix to collect everyone's racing data with his E-10000 robots to create the ultimate Extreme Gear for him to use. Eggman subsequently challenged Team Babylon and the others to a race. After the teams beat Eggman, Metal Sonic revealed himself as the one controlling E-10000B, and it was discovered that Metal Sonic had given Eggman fake data so he could use the real data to beat Sonic in Extreme Gear riding. After Sonic defeated Metal Sonic in a race though, it was revealed that Eggman never had a prize to give out. While Storm and Wave were upset about this turn of events, Jet admitted he had a fun time competing.

In Sonic and the Secret Rings, the Babylon Rogues appear in the game's gallery.

The three Babylon Rogues also make a cameo appearance in the Sonic Rivals series, each as their own respective collectible cards.

In the Sonic the Hedgehog comic series and its spin-offs published by Archie Comics, the Babylon Rogues were originally deserters from the Battle Bird Armada. At one point, Predator Hawk was among their ranks, but he left to join Mammoth Mogul. The Babylon Rogues would eventually make themselves known to the Freedom Fighters where they would attack Sonic and attempt to seize a Sol Emerald. During their search for Babylon Garden, the Rogues were forced to join the Battle Bird Armada again, but they managed to escape when Babylon Garden was destroyed.

After the timeline was rebooted by the Super Genesis Wave, the Babylon Rogues' history became almost identical to their game counterparts.

In the Sonic the Hedgehog comic series and its spin-offs published by IDW Publishing, the Babylon Rogues are treasure hunting thieves. In this media, their backstory is identical to their game counterparts', up until after the events of Sonic Forces.

While the characters got positive reviews from fans, they got mixed reviews from game journalists. IGN said Jet's voice is annoying in Sonic Free Riders. GamesRadar praised their appearance, which they called "edgy-cute-looking." 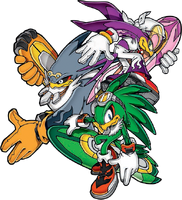 Sonic Channel
Add a photo to this gallery 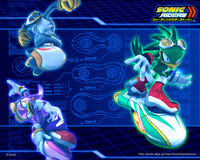 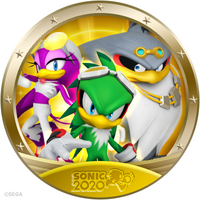 Sonic 2020 icon
Add a photo to this gallery