None (designed as male)

Greedy fools... Those who seek treasure will find only...

The Babylon Guardian, or just Guardian (守護兵, Shugo-hei?) for short, is a character that appears in the Sonic the Hedgehog series. He is a genie-like being originating from the ancient Babylonians, who is tasked with safeguarding the Treasure of Babylon from within the floating city's phantasmal core.

The Babylon Guardian and his nature is somewhat enigmatic. However, the digital distortions occurring in the Babylon Guardian's domain whenever he is injured implies that he is actually a solidified holographic security system created by the Babylonians' technology.

The Babylon Guardian is a large giant, towering several meters over the likes of Sonic. Being similar to the Babylonians from legend, he resembles a humanoid genie with vague bird features. He is very broad and muscular, is covered in lavender feathers, and his lower torso resembles a twirling tornado above his yellow and red bottle. Possessing no visible neck, he has a broad mouth that looks like a stubby beak with sharp canines, white eyes with no pupils and black rims, and feather-like hair with darker purple tips. For attire, he wears a magenta and orange vest with white-feathered shoulder rims, a thread necklace with three yellow metal pieces strung on, golden armbands and fingerings, and a magenta and orange waist-cloth with a magenta sash.

Since the era of the ancient Babylonians, the Babylon Guardian has been assigned to guard the treasured Magic Carpet, the ultimate invention of the Babylonians, even after Babylon Garden got cast into the earth.

The Babylon Guardian's subsequent fate is unknown. He may have been entirely destroyed when defending his treasure or when Babylon Garden created a black hole, or he may continue to reside inside Astral Babylon.

The Babylon Guardian is very serious and menacing. Fiercely dedicated to his duty, he will attack any trespassers without discrimination, even if the intruders are fellow Babylonians.

The Babylon Guardian is able to move at speeds compatible to those of Extreme Gears and is seemingly able to control its holographic surroundings. Like a real genie, the Babylon Guardian can retract his entire body into his bottle.

Despite his implied nature as a hologram, the Babylon Guardian is able to interact with corporeal forms, being able to project destructive energy balls from both his mouth and hands.

A Babylonian genie that attacks with energy traps on the ground and blasts. For this boss, the player controls Sonic in Story Mode. To defeat him, the player must hit his bottle three times.

The Babylon Guardian is the final opponent of Sonic Riders and is fought directly after clearing Sky Road. This battle is only playable with Sonic the Hedgehog in Story Mode, but is available to any character in normal races. The battle takes place along the track of the same name. 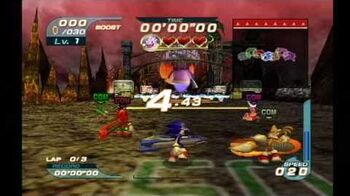 In the Sonic the Hedgehog comic series and its spin-offs published by Archie Comics, the Babylon Guardian is named Angelus. He was a hologram made by the ancient Babylonians to protect the Key to Babylon Garden under the Gigan Mountains. He battled Jet, Wave and Storm when they came to take the key. However, the Babylon Rogues destroyed Angelus' projectors, causing him to disappear.