Babylon Garden (バビロンガーデン, Babirongāden?) is the sixth and final track in the Heroes Story Mode in Sonic Riders. It takes place on the floating island of the same name and follows roads that wind through the ancient city it houses. It is only playable for Sonic the Hedgehog in Story Mode, but is available to any character in normal races.

The course is a long, snaking track above Babylon Garden. It is stormy, and jets are racing around in the sky.

Pursuing Dr. Eggman on the Tornado 2 and their airship respectively, Team Sonic and the Babylon Rogues flew straight into the storm system brewing around the newly-ascended Babylon Garden. On the way, Tails gave Sonic the Blue Star II to replace his recently destroyed Blue Star and the hedgehog skydived off the Tornado onto the ancient roadways in hot pursuit of Eggman. Jet did likewise, and the two raced against each other to catch Eggman first.

After beating Jet, Sonic finally caught up with Eggman, arriving just as he was about to unlock the entrance the Babylon Garden. Holding Amy hostage, Eggman advised Sonic not to interfere. Instead, Sonic used his Extreme Gear to generate a vortex, blowing Eggman (and Amy) away while taking back the Key to Babylon Garden. Tails, Knuckles, Storm, and Wave then arrive, and the swallow snatched up the key to open the temple on behalf of the Rogues when Jet refused Sonic's pity. As Team Sonic prepared to leave though, Amy arrived, furious at Sonic for endangering her, and began beating Sonic with her Piko Piko Hammer.

This course includes two Grind Rails, two sets of Accelerators and two power type shortcuts. In addition, the track itself actively works against the racers; silvery Babylonian fighter jets will occasionally fly overhead and drop bombs that can suddenly blow up parts of the track, leaving the player at risk of falling off the road. Fortunately, the Turbulence they create can support Extreme Gear when they blow the course out, and riding a jet is like using an Automatic Trail.

This course starts at the top of a huge ramp. In the middle of the level, one jet creates a turbulence that the player must ride on through stormy clouds. At the top, the player falls and catch a jet and ride it to the other side of the level. 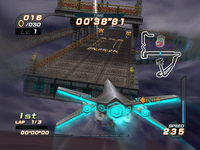 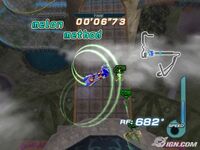