For the track in Sonic Riders, see Babylon Garden (track).

Restored to original form and in orbit around earth

Babylon Garden (バビロンガーデン, Babirongāden?) is a location in the Sonic the Hedgehog series. Originally a spaceship used by the ancient Babylonians, Babylon Garden became the ancestral home of the Babylon Rogues after the Babylonians got marooned on earth. However, its inhabitants eventually lost the entire island, accordingly as punishment from the Gods for their crimes.

Babylon Garden was rediscovered generations later by the latest Babylon Rogues, and their subsequent adventures brought it back into space.

Babylon Garden's substructure consists of the Babylonians' interstellar spaceship, Astral Babylon, which has a beautiful, yet alien design. It has an elegant fundament with pillars supporting an upper flat layer, and in the center lies a purple core enveloped by an intertwining structure. Surrounding the upper section are smaller towers with purple bottoms, which are connected by small bridges. Due to having Astral Babylon in its center, Babylon Garden's inner sanctums are highly technological.

After being reconstructed, Babylon Garden came to resemble an island. The entirety of Astral Babylon was obscured by a rock fundament, though it would have some cracks that revealed an artificial shell. On the top lay a lavishly decorated city of mosaic plazas, Byzantine domes and buildings, and winding roads for Extreme Gear traffic. Surrounding Babylon Garden was a fractured ring of tall arch bridges connected to the main structure by bridges at each of its cardinal points. These points also held scaled-down versions of the main structure. Additionally, lawns, trimmed hedges, trees, and giant hanging plants grew all over the island.

When the five Arks of the Cosmos were brought back to Babylon Garden, the island's superstructure was stripped down to its original incarnation.

Though ancient, Babylon Garden possesses a couple of technological defenses against unwanted intruders, all of which have remained functional even after being buried for ages. Silver-and-cyan fighter drones patrol the skies and its most secure area is safeguarded by the Babylon Guardian, the guardian God of Babylon.

Babylon Garden can be operated with the Key to Babylon Garden. This key can also summon the garden for its wielder (provided it is powered by the seven Chaos Emeralds). Additionally, the resonance from all five Arks of the Cosmos can call Babylon Garden to their location.

According to legend, the Babylonians, who had become a society of thieves, eventually incurred the wrath of the Gods because of their crimes. As punishment, Babylon Garden was "cast into the depths of the earth," leaving it buried deep beneath Sand Ruins. Though the stories of the treasure within Babylon Garden endured the test of time, the scattered Babylonians' descendants would forget the truth about the treasure and come to regard Babylon Garden as only a fable.

In Sonic Riders, Babylon Garden was rediscovered by the current generation of Babylon Rogues (under Dr. Eggman's machinations), who sought what they believed was a valuable treasure here. Using the Key to Babylon Garden and the seven Chaos Emeralds, Jet hoisted Babylon Garden back up from the underground. Eggman then stole the key and went to Babylon Garden to steal its treasure, convinced it was technology he could use to conquer the world, with Team Sonic and the Babylon Rogues in hot pursuit. At Babylon Garden, Sonic and Jet raced each other to Eggman while pursued by E-10000Gs and dodging Babylon Garden's defenses, Meanwhile, Wave, Storm, Tails, and Knuckles would arrive on Babylon Garden, only to start fleeing from E-10000Rs across the Garden's airborne plazas.

Beating Jet, Sonic disposed of Eggman as he tried to enter Babylon Garden and took back the key, just as Sonic and Jet's teams reunited. While Jet was too proud to take the key, Wave took it on his behalf. The Babylon Rogues then entered Babylon Garden's center, while Team Sonic dealt with an incensed Amy. There, the rogues faced the Babylon Guardian. Hearing the spectacle, Team Sonic and Amy sped in to help out just as the entrance slams shut. Together, the teams faced the guardian God in its illusionary dominion and defeated it, making it disappear and release the chest containing the Magic Carpet. Just as the groups uncovered the carpet, Eggman returned, with dual blasters in hand, to demand the treasure. While the group gladly obliged, Eggman ended up fainting from the shock over wasting so much time and resources on a piece of cloth. Needless, the others were fascinated by the Magic Carpet and how it resembled an Extreme Gear. Though also intrigued about their ancestry, the Babylon Rogues left Babylon Garden to itself to continue searching for treasure.

In Sonic Riders: Zero Gravity, Babylon Garden was called to Crimson Tower by the five Arks of the Cosmos when Team Sonic and the Babylon Rogues brought them together. However, SCR-HD, possessed by the Arks of the Cosmos' programing, stole the relics and brought them to Babylon Garden, causing the calamity the Babylonians tried to avoid: with the meteorites resonating together, Babylon Garden's engine overloaded, causing the island's shell to fall apart as a giant black hole was formed which would eventually swallow the entire planet.

To stop Babylon Garden, Team Sonic and the Babylon Rogues headed into its engine room to disconnect its core unit. There, they faced Master Core: ABIS, a mutated form of SCR-HD, and destroyed it, causing Babylon Garden's black hole to subside. Its engine now under control, Babylon Garden, in its original incarnation, went into orbit around earth. However, rather than fulfilling their ancestors' wish of returning to their home planet, the Babylon Rogues opted to remain on earth.

A thousand years later, the Battle Bird Armada and the Babylon Rogues managed to find Babylon Garden, which was located beneath New Mobotropolis, and succeeded in reactivating it and made it emerge into the sky. However, before the ship's autopilot could create a black hole when it tried to travel into space, it was stopped by Sonic the Hedgehog, and Babylon Garden itself crashed into the mountains near Mobotropolis. 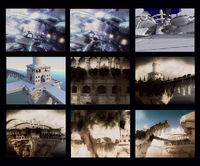