Baby is a main character from the Super Monkey Ball series. He is the son of AiAi and MeeMee, and a smarter than average baby who likes mechanics. Oddly enough, as a baby, Baby is the smartest of the team, and always assists with the logical thinking of every serious situation.

Baby has tan skin and grayish-teal fur with small, pink, rosy cheeks. He has brown eyes and a scruff of hair on the top of his head, similar to the ones that his mother and father have. Baby wears a bib, a blue-starred diaper, and red single-lens shades with a blue frame. He is also always sucking on a yellow pacifier.

In Sega Superstars, Baby appears as one of the four main and independent characters that originate from the Super Monkey Ball franchise. In the Super Monkey Ball game, the player must move their arms into different positions in order to guide the Monkey Ball around obstacles and towards the goal, picking up as many bananas as possible along the way.

In Sega Superstars Tennis, Baby cameos as a court spectator and appears in loading screens. He only appears on the Super Monkey Ball tennis court and during its mini game loading screen.

He is also mentioned (alongside MeeMee, GonGon, and Dr. Bad-Boon) in AiAi's character bio.

In Sonic & All-Stars Racing Transformed, Baby can be spotted on the Monkey Ball Park racetrack spectating the race from a distance, alongside YanYan and a few other Super Monkey Ball characters.

In SEGA Heroes, Baby appears as a playable blue legendary hero. He is one of the four playable Super Monkey Ball characters and the only legendary hero from that series.

Like all the other characters, Baby had three skills. His included Tantrum, Diaper Dash, and Future Baby, each having a different and special ability.

Baby was available for Campaign mode and did not appear during the Campaign cutscenes (unlike the other Super Monkey Ball characters). However, he had a chance of being spawned by Dremagen in the final level.

Baby is posed to be an innocent baby monkey who means nothing but good, but can also be a little naive, especially as he aged. For as young as he is, Baby is extremely intelligent for his age and often helps assisting his family and friends by using his brains. Sometimes, Baby can also be loud and obnoxious, but it does not matter how annoying he can be — his family will always love him, and he will too. 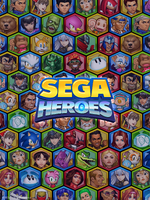