Stay sharp as gravity warps this course, the true form of the divine wings, traveller of stars!

Astral Babylon is a course which is unlocked after defeating Master Core: ABIS in Sonic Riders: Zero Gravity and is the Heroes' section of Babylon Garden.

The race takes place in the inside of the spaceship form of Babylon Garden. Odd objects appear in the sky, possibly ancient Babylonian satellites or planes. Digital logos of Babylon and lights appear near the start of the course.

The layout is a simple rectangle with four turns. The player can pass through switches to reveal Item Boxes, Trick Zones or shortcuts (a Catapult for Air Riding, a rail for Skates and Boards with Grind, Babylon statues to smash for Bike and Wheel users and a series of springs for characters in Attack/on-foot mode).

The music in this track is called "The Core" which is also used for Mobius Strip. 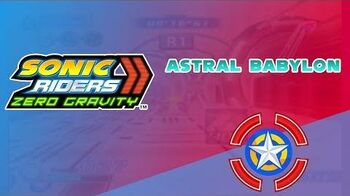