An Asteron, from Sonic Mania.

The Asteron[1][2] (テルスター[3], Terusutā?, lit. "Telstar") is an enemy that appears in the Sonic the Hedgehog series. It is a mass-produced, starfish-based Badnik model created by Dr. Eggman, and the counterpart of the Asteron from an alternate dimension set in the recent past.

The typical Asteron has a simple, flat starfish-shaped appearance. Its core body is colored light-yellow and in the middle of its body is a gray hole with a red eye in the hole. All five points on the Asterons also have gray spears on their tips.

In Sonic Mania, and its expansion Sonic Mania Plus, Asterons appear as both obstacles and enemies in Press Garden Zone Act 2. In gameplay, arrow columns will periodically fire sideways-aligned Asterons into walls. Because of the sideway view of them though, these Asterons appear as first glance as simple spears. Touching these Asterons while they are in flight will damage the playable characters. If these Asterons are allowed to hit the walls however, they can be used as platforms by the player for a few seconds before they fall off.

During the boss battle with the Heavy Shinobi, the Asterons are used as shurikens by the aforementioned Hard Boiled Heavy when he jumps. At first, he throws only one Asteron at a time, but the more damage he takes, the more Asterons he will throw at once, with three being his maximum. When they are thrown into the wall or floor, the player can Spin Attack or Spin Jump them to destroy them. However, if they are left alone for a second, they will start flashing before detonating and releasing damage-inducing spikes in five different directions.

As their main offense, Asterons can self-detonate themselves, causing them to release deadly spikes in five different directions. 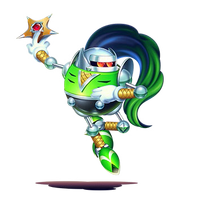