Innovative programming allows him to look at two directions at once. With one eye.

The Armorillo is an enemy that appears in the Sonic Boom series. It is a mass-produced model of Destruction Troops created by Lyric the Last Ancient.

The Armorillos are light blue robots with grey joints. They have a round and heavily armored torso with a large red eye with green sclera on the front, a small pelvis with three small rockets on it, a wide flap on their back, and two thin, lower arms with round plates on their elbows. They also have two-barreled cannons for hands.

The Armorillos were created by Lyric the Last Ancient five thousand years ago in the Robot Facility to help him destroy the earth's lifeforms and conquer it.[1] During an attack on the remaining Ancients however, the Armorillos were shut down as Lyric got imprisoned.[1][2] Five millennia later, they were recovered by Lyric after he escaped to search for the Crystal Shards and battle Team Sonic too.

The Armorillos are encountered in Seaside Jungle and the Air Fortress. In gameplay, they hover in a stationary position in midair. When they spot the player though, they take aim for a few seconds before firing shots that will home slightly in on the playable characters. After flying for a few seconds however, their shots will disappear. Often, the Armorillos are positioned (sometimes in rows) so the player can cross gaps or reach out-of-reach areas by skipping across the Armorillos with the Homing Attack. Armorillos are also only destroyed for a short while as new ones will later respawn to take their place. Additionally, the twelfth Toy the player purchases from Q-N-C's Toy Shop will be an Armorillo figurine.

After Team Sonic and Shadow defeated Lyric, the Armorillos were stopped once more.

Basically, the Armorillos are mindless and silent drones unwaveringly loyal to Lyric the Last Ancient, having been programmed to obey his every command.[1]

The Armorillos possess an innovative programming that allows them to look in two directions at once using only one eye. They also have rockets that let them levitate in midair and hand cannons that can fire small energy blasts. 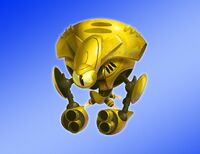