Ark of the Cosmos

Ark of the Cosmos

All five Arks of the Cosmos

Five ancient stones of Babylonian origin that can charge and manipulate gravity.

The Arks of the Cosmos (星の聖櫃, Hoshi no Seihitsu?, lit. "Ark of the Stars") are five ancient, ring-shaped metallic stones created by the Babylonians that allow the user to manipulate gravity. They are a major plot device in Sonic Riders: Zero Gravity where Team Sonic, Dr. Eggman and the Babylon Rogues are hunting for them.

The Arks of the Cosmos possesses a magnetic field that allows them to take a mass' energy, or gravity, and convert it into other forms of energy, making them a powerful energy source. This also allows them to manipulate gravity, making it possible for the wielders of the Arks to either negate gravity or create bursts of gravity that can repel obstacles at will.

Once all five Arks of the Cosmos are brought together, their resonance can call Babylon Garden to them.

Much of the Arks of the Cosmos' history are shrouded in mystery. Apparently, they were created by the ancient Babylonians to be power units that could utilize the power of a black hole to power the warp drive of a spaceship called Astral Babylon, which would later become Babylon Garden.

When the ancient Babylonians approached Sonic's world in the distant past, they discovered that they could not control the Arks of the Cosmos and that their power was about to create a black hole. In order to prevent this, the ancient Babylonians disconnected the Arks of the Cosmos from Astral Babylon and sent them into orbit of Sonic's world, leaving them stranded there as a result.

The Arks of the Cosmos then remained in orbit of Sonic's world for an unknown amount of time until eventually falling down on their own, but at different points in time. Two of them fell down during the time of the Babylonian, who hid them at Gigan Rocks and Crimson Crater, and when another one appeared, it became at part of Monopole's museum exhibit. Dr. Eggman later found the one in Crimson Crater and used it as a power source in MeteoTech's mother computer.

The last two Arks of the Cosmos fell down during the beginning of Sonic Riders: Zero Gravity, one at Crimson Tower, which came into the possession of SCR-HD, and the other to Tails who passed it on to Sonic. Due to an unknown program inside of the Arks of Cosmos, they took control of the MeteoTech network and drove SCR-HD and the SCR-GP robots to go on a rampage and search out the other Arks of the Cosmos and return them to Babylon Garden. Once they learn of this, Team Sonic try to reclaim the Arks of the Cosmos to stop the global robot rampage, while Jet and the Babylon Rogues are hunting them to become the fastest Extreme Gear riders in the world. 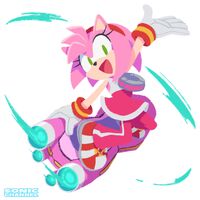