As beautiful as the new Knothole Village is, Sonic just can't adjust to it knowing that Robotnik's presence - and that of the Overlanders - persists in Robotropolis. For his part, Elias has chosen the path of peace, electing to focus on turning Knothole into a permanent habitat rather than trying to reclaim Robotropolis. By issue's end, however, dark alliances shall be made and peril shall befall the Freedom Fighters - in the form of both natural disasters and wicked enemies.

Charmy and Safron attempt to help Knuckles in the conclusion to this latest Knuckles trilogy.

In the six weeks following the annulment of Sonic's knighthood, Prince Elias set to work commissioning the construction of a new castle, hospital, prison, and public school for the kingdom. Sonic is frustrated by the prospect of having to go to school and the fact that he hasn't seen Sally in weeks. Bunnie assures him that they'll see each other at school, but Sonic wonders what she's doing. Meanwhile, at the castle, Sally stumbles across a picture of herself and Sonic while preparing for school. She reflects that she's been so busy with her family affairs that she hasn't had time for him when Geoffrey appears, telling her that her parents have requested her parents. Queen Alicia praises her son for his work and asks Sally to join the family as they look over the beautiful new Kingdom of Knothole.

Sonic's thoughts wander to Robotropolis, where the Overlanders are getting accustomed to Dr. Eggman's rule. In the palace, Colin Kintobor calls to his brother, complaining that he's spent the past six weeks entirely on his work instead of reconnecting with his family. Eggman relents, leading Colin and his family to a lounge. Lady Agnes questions if having the Shadowbots inside the city is necessary, but Eggman quickly assures her that if they weren't the "furries" would be able to get inside the city. Hope silently doubts her step-uncle's honesty while Colin tells Eggman that he's a better man than the one he knew before the war. Suddenly, the group is alerted to a civilian breaking curfew. On a monitor, they see Snively being escorted by Shadowbots.

Sonic and Tails prepare to go to sleep, still excited about the first day of school. Tails teases Sonic about his relationship with Sally before they eventually fall asleep. The next morning, the duo is startled from their slumber by a massive earthquake. They head into Knothole and save the citizens from falling construction equipment. Meanwhile, Dr. Eggman wakes his newest prisoner, Snively, who begs the doctor not to Roboticize him. Eggman promises that he won't if Snively swears allegiance to him. In exchange, he also promises that Snively will have his revenge against his neglectful father: Colin Kintobor.

Sonic, Tails, Bunnie and Rotor head to school and are separated by age group. Meanwhile, in Robotropolis, Hope wanders through the underbelly of the city and is frightened by a Robian. Tails makes new friends at school, but soon realizes he forgot his bookbag somewhere. He searches the school halls when Athair appears before him. The old shaman tells the Chosen One that he is needed and teleports him away. Sonic, Bunnie and Mina sit together in class while their teacher, Nate Morgan, begins his lecture on physics. After class, Sonic asks Nate why Sally is not in class with them. Nate reveals that Sally is receiving private lessons at Castle Acorn.

Nic is surprised to see her brother, Nack, has returned without Knuckles. Nack explains that he already handed Knuckles over to the Albion High Council and received their payment. Nack suggests they head out and party, but Nic is concerned about Charmy Bee and Saffron. Nack assures her that two little bees couldn't possibly cause them any problems. Meanwhile, sensing that they're finally alone, Charmy and Saffron search for Knuckles.

Elsewhere, Gala-Na and her assistants prepare to drain Chaos Knuckles of his Chaos powers. Once their equipment is prepared, a scientist wearing a Chaos Siphon Suit drains the energy out of Knuckles and into himself. Knuckles is overcome with pain but refuses to surrender; the immense Chaos power bleaches the scientist's fur white as he struggles to remain conscious.

Charmy and Saffron spot Knuckles and try to set him free: Charmy mashes on the computer keyboard controlling the process and Saffron switches a dial on the suit. The flow of Chaos energy is reversed and Knuckles is overloaded with power. Charmy tries to talk to his friend, but Knuckles feels as if his entire world has suddenly changed and teleports away. While the assistants tend to the scientist who was wearing the Siphon Suit, Gala-Na contacts Nic and Nack and asks them to help. The bounty hunters decide they don't want to work for the Alionites again and refuse her offer. Gala-Na is at a loss, wondering what can possibly be done to stop Knuckles now. 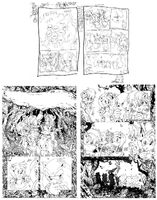