A defining moment for Sonic and his friends as Sonic is finally knighted and King Max declares the formation of the Kingdom of Knothole - a state that will serve as a [haven] for all Mobians who wish to live free of Robotnik's tyranny. Furthermore, he announces the reformation of the Knothole Freedom Fighters - officially sanctioned to serve in conjunction with Geoffrey's Secret Service Team to keep the peace. And a fragile peace it is, as Robotnik and his charges still lurk about, plotting their revenge against Sonic. As if that weren't enough, in his quest to fortify his computer for his latest onslaught, Robotnik finds and launches a file that will ultimately tie into the upcoming adaptation of the Sega Dreamcast game. And wait until you see who the first lieutenant is.

Tales of the Great War - What Really Happened

Uncle Chuck uses his roboticizer to try to save Jules' life and the war against the Overlanders ends.

King Maximillian Acorn knights Sonic the Hedgehog for his consistent acts of heroism while Prince Elias and Princess Sally present him with a medal of honor. Sally gives him a kiss on the cheek while the king announces to the citizens that Knothole Village shall be rechristened the Kingdom of Knothole and serve as a safe haven from Dr. Robotnik. In addition, he reinstates the Knothole Freedom Fighters as the kingdom's protectors.

In Robotropolis, Dr. Robotnik has recovered from the virus infecting his systems. Having been forced to dump many of his corrupted memory files in the process, he swears vengeance on his suspected culprit: Sonic. He reminds himself that, while Sonic's parents have escaped his clutches, Sonic's Uncle Chuck remains his mindless slave. Meanwhile, in Knothole Village, Sonic glumly packs up Uncle Chuck's belongings so Nate Morgan can move into his home. His parents comfort him, assuring Sonic that Uncle Chuck will be back someday.

Elsewhere, King Acorn, Sally and Elias watch over Alicia Acorn in her stasis tube. Elias asks his father if Dr. Quack has determined the reason for her continued deep sleep, but is informed that it is still unclear. The king tells his children that their mother is alive, but may very well never wake from her slumber. Sally and Elias refuse to accept this and plead for their father to keep hoping. The group heads out with Nate Morgan, not noticing that the queen's hand twitches slightly inside the tube. Deep in space, two spacecrafts continue their journey towards Mobius.

Mina Mongoose wanders through Knothole Village, wishing that she could have been roboticized so she could be with her loved ones. While stewing over her grief, Rosie approaches her and introduces her to Rory, Snaggle and Sasha. Explaining that their parents were taken by Dr. Robotnik, she asks Mina to look after them while she runs some errands, thinking that the kids would do well to talk with someone who they could relate to.

While on a walk through the village, Bunnie asks Antoine to tell her what is on his mind. Antoine obliges, explaining that he is been troubled ever since Sonic told him that his father is the High Sheriff, Dr. Robotnik's Sub-Boss in Mercia. He swears to save his father someday when Sonic, Tails, and Sally arrive. They put their worries aside and congratulate Sonic on his knighthood. Geoffrey St. John arrives with his Royal Secret Service team and, with a bit of affable reluctance, congratulates Sonic.

Elias watches the Freedom Fighters and Secret Service from a distance and thinks of how they will never know that their new alliance was his idea. He walks through the village, envying their adventurous lives and regretting his station as prince, when he overhears Dr. Quack speaking with the king.

Quack explains that Alicia has become dependent on the freezing temperatures of her stasis tube: while she is perfectly healthy, leaving the tube would kill her. He tells the king that they only have enough power to keep the tube running for one more week. In Robotropolis, Dr. Robotnik searches his files for a means to destroy Sonic and his friends. Having found a lead in Soumerca, he sends his Shadowbots to find Chaos.

Tales of the Great War Part Six: What Really Happened

Sitting around a campfire with several other mobians in Knothole Village, ELias asks Bernadette to continue her story.

With Jules on his deathbed, Chuck and Bernadette decided to use Chuck's experimental Roboticizer to save his life. Jules interrupts the story and suggests that saving him was a bad decision since, in his desperation to save Jules, Chuck never noticed that Julian Kintobor sabotaged his invention.

Bernadette scolds Jules for assuming things and they continue telling their story. They explain that Julian convinced King Maximillian Acorn to stake the outcome of the Great War on a one-on-one sword duel with the Overlord of the overlanders, Charlemagne. Amadeus Prower held back the overlord's second in command, Colin Kintobor, to keep the fight fair. King Acorn defeated Charlemagne, but refused to kill him. Instead he demanded that they keep their bargain as promised and call off the war.

Julian was frustrated by the outcome, with both of his enemies surviving the encounter, but took joy in seeing Chuck lose all confidence in his abilities as a scientist after the accident with Jules. Unable to face the shame, Chuck left home. Bernadette was left with her robotic husband, not sure how to explain his condition to Sonic.

The editor gathers the Knothole Freedom Fighters around for a pep talk. He goes a bit overboard and basically asks them to murder the other team. Rotor is a bit taken aback by how passionate he is about winning a softball game against the Archie characters.

Bunnie: Congratulations on your knighthood, Sugah-hog!
Antoine: I as well salute you, mon ami!
Sonic: Then how about calling me "Sir Sonic" from now on?
Tails: Yaaay! Sir Sonic!
Antoine: I thoroughly am rejecting zat notion!
Sally: I warned Dad this would happen! 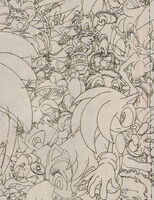