Sonic and The Freedom Fighters are back on Mobius and land in the newly re-christened Robotropolis. Before heading out to Knothole and rejoining the others, they try to accomplish a dangerous mission with the help of... Snively? Also in this issue, you will witness the debut of FRY as the new penciler for Sonic The Hedgehog! Joining FRY is inker Andrew Pepoy (from Knuckles fame).

Tales of the Great War – Another Point of View

While evading capture by Shadow Bots Tails, Bunnie, Antoine, and Sonic’s parents attempt to rescue Jeremiah from the library before he’s discovered.

A group of Shadowbots gather around the Freedom Fighters' shuttle, which has landed on the outskirts of Robotropolis, and are surprised to find that Sonic the Hedgehog and his friends have fled. They begin searching for their master's enemies, unaware that their prey are hiding behind the nearby rocks. Sally is surprised that the city seems deserted, but NICOLE suggests that the citizens likely fled to Knothole for safety. Snively is horrified, explaining that since Robo-Robotnik roboticized himself he could easily have downloaded his memories into a new robot body and likely has a file on the village's location.

Sally decides that they'll need to stop Robotnik from accessing that file, prompting Snively to quickly say his goodbyes and try to slip away. Sonic cuts him off, pointing out that he probably knows how they can get to the file since he's the old Robotnik's nephew and henchman. Snively tries to make excuses, but Sonic teases him by loudly wondering what the Shadowbots will do to a traitor. The group splits up: Sonic heads out to divert the Shadowbots' attention, Sally and Snively head into Robotropolis to locate the file on Knothole, and Bunnie, Antoine, and Tails escort Jules and Bernie back to Knothole Village.

Meanwhile, in Knothole, the Mobians are at a loss on how to deal with the overcrowding of the village when King Acorn arrives. He gives a speech, explaining that those in need will be given lodgings first and foremost and honoring those lost in conflict with Robotnik. Elias realizes his father is talking about Sally and the Freedom Fighters and asks Nate Morgan how he remains so calm. Nate tells Elias that Max is an experienced monarch and blames himself for allowing Sonic and the others to go after Robotnik.

In Robotropolis, Sonic, Sally and Snively spy a group of Shadowbots rounding up citizens in front of Robotnik's headquarters. Sonic disposes of the robots while Sally and Snively sneak inside. Dr. Robotnik, monitoring the conflict from his command center, orders all of his Shadowbots to attack Sonic. Spotting the reinforcements, Sonic tells the citizens to run while he takes on the robots. Meanwhile, Sally links NICOLE to Robotnik's master computer. Suddenly, a Shadowbot appears and apprehends Sally. Snively saves her by zapping the Shadowbot with a severed power line.

Outside, Sonic circles around the Shadowbots so fast that they catch fire, heating their metal frames so much that it melts the tar beneath them and sticking them to the ground. As he laughs at the Shadowbots, Sonic notices one of the citizens he saved rushing back towards Robotropolis. The girl demands to be let into Robotnik's headquarters, but Sonic holds her back. She tells him that Robotnik captured someone she loves. Sonic breaks the news to her that her loved one has probably already been roboticized and the same thing will happen to her if she goes inside. She says that he doesn't know how hard this is, but Sonic tells her that the same thing happened to his dog Muttski and his Uncle Chuck. The girl apologizes to him through her tears.

Sally and Snively reunite with Sonic outside. Seeing the rescued citizen sobbing, Sally tries to calm her down. Snively bids his farewells while Sonic snidely bemoans having worked with one of his worst enemies. Robotnik watches from inside his base as Sonic, Sally and the girl—Mina Mongoose—head back to Knothole. With glee, Robotnik gloats that he'll directly interface with his master computer and download the location of Knothole Village directly into his memory. As he begins the data transfer, Robotnik catches a virus planted by NICOLE. He feels woozy and feebly demands that his Shadowbots help him lie down.

Tales of the Great War Part Four: Another Point of View

Jules, Bernie, Antoine, Tails and Bunnie lay low in the outskirts of Robotropolis as Shadowbots patrol the area. Jules decides that they'll need to change their path, but Tails refuses to leave Jeremiah and the library at the mercy of Robotnik. Bernie agrees, explaining that preserving their history is vital, and Jules sarcastically apologizes for trying to be practical.

They arrive at the library and Tails begs Jeremiah to leave with them, but he refuses to abandon Kirby's books. Jules is a bit excited, having read Kirby's stories as a child, and at Bernie's suggestion reads a passage of a book chronicling the events of the Great War.

Several years in the past, Colin Kintobor lead a band of Overlanders in bombarding Mobotropolis. The weary Mobian troops were directed down into the bunkers, where Bernie and Cocoa Cat led Jules, Charles and other soldiers through a sewer system and behind enemy lines. Colin managed to shoot Amadeus Prower in the eye, but this attack only served to inspire the Mobians to fight harder.

Realizing that he would likely lose the battle, Colin escaped into the sewer system. Some time later, King Acorn presented his adviser, Julian Kintobor, with a picture of the escaped Overlander leader and asked for his advice. Recognizing the man as his brother, Julian suggested that the Overlanders would stop at nothing to destroy the Mobians and must be eradicated. Having won over the king's trust, Julian was given the title of Warlord. In the present, Jules realizes that preserving this information is important and decides that the group should take as many books as they can and return for the rest later.

J. F. Gabrie takes a baseball match against the Archies a little too seriously... 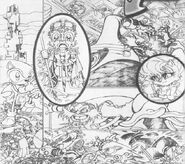 Sonic the Hedgehog comics
Retrieved from "https://sonic.fandom.com/wiki/Archie_Sonic_the_Hedgehog_Issue_76?oldid=2135810"
Community content is available under CC-BY-SA unless otherwise noted.