Sonic and Tails travel to the island of Downunda and team up with the Downunda Freedom Fighters against... one of their own and his army? This story has so many thrills and chills, dundee-style.

What does Ixis Naugus do when Sonic and Tails catch up to him?

Sonic and Tails, accompanied by Walt Wallaby and Barby Koala of the Downunda Freedom Fighters, are surrounded by the Platypus Army with Guru Emu and Wombat Stu in cages overhead. The quartet proceed to dispatch their foes, with Barby complimenting Tails on his efforts; Walt then assists Sonic by throwing him into the air so that he can use his Sonic Spin to free the two trapped Freedom Fighters. The two parties begin speaking, asking each other plenty of questions, but Walt calls a halt to the whole thing and suggests that they go back to their last known contact with the Knothole Freedom Fighters and work forward from there.

The four Downunda heroes take turns explaining how they defeated their arch-enemy, Crocbot, and what happened afterwards. They explain that they were ridding the Great Crater of the ruins of Crocbot's prison camp when their missing teammate, Duck "Bill" Platypus, went rogue. He subsequently returned at the head of an army of his own people, attacking the reconstruction site and forcing the Freedom Fighters to close it down after their volunteers started quitting. Bill then sent an invitation to Guru and Stu, asking them to meet with him and work out a truce, only to capture them when they arrived. Barby and Walt had been preparing to go after them when Sonic and Tails arrived in the Winged Victory, still in pursuit of Ixis Naugus. Having been appointed by the Mobotropolis Council to check on the situation in Downunda, the pair agreed to help Barby and Walt, earning Tails an affectionate kiss from the Koala before the group set out.

In the present, the group decides to locate Bill, though Walt and Sonic immediately begin clashing over the chain of command. The hostilities continue as they travel by raft on a nearby river, until Barby is forced to intervene after hearing a suspicious noise. The group are then attacked by Platypi riding mobini crocodiles, but manage to beat them off and then escape when Tails and Sonic use their special abilities to propel the raft forward at high speed and protect the vessel from any further Crocodile attacks.

The group spots a hut just off the river with a dock nearby, and realize that it must be Bill's headquarters. They approach the structure and hear Bill inside, apparently talking to himself about the current situation. Breaking into the room, they confront Bill only for him to faint from exhaustion, and then hear strange noises coming from beneath the floor. Finding a trapdoor, they open it to reveal none other than Crocbot-or at least, his limbless torso. The robot then explains his role in recent happenings: having planted a post-hypnotic chip on Bill while the Platypus was his prisoner, he used him to gather an army of Platypi. With the materials gathered by them, he intended to have a Combot constructed to repair him so that he could take his revenge. However, even with this plan thwarted, he starts to warn them about a so-called Bunyip when Sonic pulls his plug, much to Walt's irritation.

Sonic responds that he's been given authorization to deactivate hostile machines like Crocbot, and Barby reaffirms that they are likewise subjects of Maximillian Acorn. Soon afterwards, Sonic and Tails take off with Crocbot stowed away in their plane, bidding goodbye to the Freedom Fighters. The Downunda Freedom Fighters then contemplate Crocbot's words about the Bunyip, which Barby recognizes as a mythological creature, leading the group to assume that Crocbot was just muttering nonsense in his damaged state. Up in the plane, Sonic comments on how jealous Walt was of the attention Barby was giving Tails, whom Sonic thinks likes his friend, and Tails responds that he would like to see her again too.

Flying through a stormy sky over a rough sea onboard the Winged Victory, Sonic and Tails continue their pursuit of the wizard Ixis Naugus, unaware that he has transformed himself into a nearby storm cloud. Tails expresses gratitude that they are not traveling by boat, while Sonic replies that the skies ahead are not the safest for their plane either. Consulting a tracker built for them by Uncle Chuck to help them find Naugus, Sonic is perplexed when the reading seems to disperse, and blames it on the weather.

Naugus, still unseen by the heroes, curses their device and its ability to detect him even in cloud form, but gleefully takes advantage of his new form to strike them with a powerful blast of wind that sends them spiraling towards the sea. Sonic struggles and manages to regain control of the plane, and flies it right through the wizard's cloud face. The pair then see land in the distance, and wonder what further adventures are waiting for them.

Tales Of The Freedom Fighters: Geoffrey St. John "On His Majesty's Secret Service - Part One"

Geoffrey St. John and his teammate Fleming narrowly escape an explosion. The older Royal Secret Service agent informs Geoffrey that he is too old for these missions, having served on the team since Geoffrey's father led the service. Some time later, Geoffrey meets with King Maximillian Acorn while the latter is being examined by Dr. Quack.

The king informs him that he needs new operatives to deal with threats to the kingdom. Geoffrey volunteers and asks if the king has any candidates in mind. The king abdicates the decision to Geoffrey, informing him that he has a special mission in mind and Geoffrey's team must be capable of covert operations outside the Kingdom of Acorn's boundaries. Geoffrey reminisces on his father saying that leading the Secret Service was a dirty job.

Determining that his new force will need a camouflage expert for scouting purposes, Geoffrey travels to the Floatinf Island. Using full spectrum goggles, he quickly identifies his intended target and fires an arrow with a clamp attached, pinning him to a tree. The invisible individual is revealed to be a chameleon, and an acquaintance of Espio of the Chaotix. Boarding Geoffrey's plane, the pair then head to Downunda and home in on Wombat Stu. The chameleon has his doubts about Stu's potential, but Geoffrey offers him a place on the team regardless, which Stu accepts out of a desire for adventure.

Returning to Mobotropolis, Geoffrey has the pair go off to get some sleep before visiting his next intended recruit, Hershey Cat. Surprised to find her doing paperwork, he is informed that she volunteered to do the job when Sally Acorn asked. He then asks her to join him at the armory the next day, promising to handle things with Sally with regards to her reassignment. He then heads to his quarters to get some sleep and ponder who the next operative should be, unaware that two intruders are waiting for him. 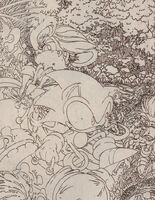