Sonic and Tails Locked In Chains?!? No, you didn't miss an issue or a story, that's how this issue starts off! But, of course, that's not the only question to be asked. Here are some more: A mysterious figure who roams the forest? An evil villain with a tragic secret? What could we possibly be talking about? The answer is in the saga "Friendly Rogues and Foul Villains!" This story also features everybody's favorite echidna, Knuckles, in a storyline that picks up from Knuckles the Echidna #11 and concludes in Knuckles the Echidna #12.

Tales Of The Freedom Fighters - The Living Crown

How did the Sword of Acorns come to be? Where'd the Crown of Acorns come from? What's "The Source of All"? King Acorn explains all of this in this tale of how all these things came to be...

Sonic, Tails, and Yanar are chained up in the dungeon of Snottingham Castle when two robians enter, taking Tails away to see the High Sheriff. Sonic tries to charge after the robians, but is held back by his chains and hits his head on the wall. Meanwhile, in Deerwood Forest, Rob o' the Hedge confronts a confused Knuckles the Echidna. While Rob shows off his impressive acrobatic skills, Knuckles throws Rob's bow to the side and knocks him into the nearby river. Rob, realizing Knuckles means no harm, asks for help on his crusade.

Yanar asks Sonic how he and Tails ended up in Snottingham. Sonic explains that their plane was struck down during the horrible weather and, when they woke up, the High Sheriff's robots confused Sonic for Rob and imprisoned them. Yanar tells Sonic that his tribe of echidnas ran into some robots, who took his people as slave laborers and locked him up. The robians return, ready to bring "Rob" before the Sheriff. Yanar attacks them, but is overpowered. The robians decide to take Yanar to the High Sheriff instead, not noticing that Yanar grabbed their keys and tossed them to Sonic.

Back in the forest, Rob explains to Knuckles that his band was captured and roboticized by the High Sheriff, Dr. Robotnik's Sub-Boss of Mercia. Rob takes him to the treetops where they spy the lost tribe hard at work, cutting down trees in the forest for the High Sheriff. Realizing that the people of the tribe really are his responsibility, Knuckles heads off to fight the Sheriff's robots with Rob in tow.

The robian guards return to take Sonic to the High Sheriff. Sonic, having freed himself of his shackles, knocks them out and locks them in the cell. Eventually, Sonic finds the torture chamber, where Tails is being tickle tortured for information. Tails explains that their plane crashed nearby, but the Sheriff is convinced that Tails must be a spy. Sonic recognizes the Sheriff as a roboticized Armand D'Coolette and leaps into the chamber, freeing Tails and telling the Sheriff that he is a friend of Antoine. The High Sheriff attacks, claiming that he owes his life to Dr. Robotnik. Sonic finds himself unable to attack the Sheriff, so Tails drops a chandelier onto the High Sheriff. Sonic and Tails flee, hoping to find a way out of the castle.

Meanwhile, Rob hails a stranger, calling them a varlet and asking them to "stand and deliver". The stranger feels insulted by the remark and knocks Rob into yet another river with her staff before revealing herself as Mari-An. She helps Rob out of the water and both of them look longingly into the eyes of the other while at a loss for words. Knuckles snaps them out of it by pointing out that he has found the plane of his friends, Sonic and Tails. Rob is sure that they will find them at Snottingham Castle.

Sonic and Tails wander through the castle while Rob leads Knuckles and Mari-An to Friar Buck's chapel, where he leads them through a secret passage into the castle. Rob accidentally hits Sonic when opening the trapdoor at the end of the passage. The two hedgehogs greet each other when Rob remembers that he has heard of Sonic before and that he sent his cousin, Amy Rose, to Knothole Village for safety long ago. Knuckles tells them to save the chitchat as they come to a balcony where they see the High Sheriff preparing to execute Yanar.

Tales Of The Freedom Fighters - "The Living Crown"

Maximillian Acorn is receiving a checkup from Dr. Quaack, who is still worried about the king's health since the spirit of Ixis Naugus was driven from him. Max tells Quack that he already knows how he was cured and Quack's late father would vouch for him. The king then decides to explain to Quack why the Kingdom of Acorn is a monarchy.

In the past, a young Maximillian was escorted by King Frederick Acorn to a place deep within the palace for his tenth birthday. There he was introduced to the Source of All and instructed to wade in its depths. Max emerged covered in the metallic goo, which was then drained from him and molded to create his personal Crown and Sword of Acorns.

Max explains that he had bonded with the Source of All, which he believes to be the very genesis of all life. Quack asks what the crown and sword are for, and Max tells him that they are his link to the source. During Robotnik's coup d'état he had a premonition from the Source that he would survive his encounter and handed his sword to Rosie Woodchuck for safekeeping, instructing her to escort a young Sally to safety. The Crown, without the Sword at its side, merged with Max. He explains that the Crown alone could not protect him from Ixis Naugus' spells and that regaining the Sword reversed its effects. With both Sword and Crown back in his possession, the king's link with the Source is rekindled and he decides that action must be taken, regardless of the feelings of his daughter.

Rob: I, King of Deerwood Forest ask the questions! And the name is Rob! Rob o' the Hedge! Not Bub!
Knuckles: Hedgehogs! All 'tude and no talent! 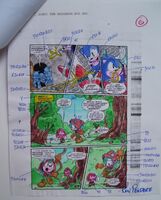