Immortality Is Forever - Life Is Finite

Immortality Is Forever - Life Is Finite

Sonic, Knuckles, and Tails find themselves in a strange Zone, piled on top of each other on a floating rock. Knuckles complains about having another Chaos-powered looney like Mammoth Mogul get the better of him when the rock beneath them comes to life and tries to eat the trio. Sonic uses his super speed to grind the rock into dust, but they're left floating in space. They spot a vision of Athair nearby and follow it into a vortex, which they hope will lead them back to their friends.

Meanwhile, Mogul muses over the bravery exhibited by the Knothole Freedom Fighters and Chaotix, who challenged his power. Using Enerjak's power, he transforms into Master Mogul and uses his telekinetic powers to cast away his defeated opponents. He thinks to bring Sonic, Tails, and Knuckles back from the abyss as the elite enforcers of his rule over Mobius. The Freedom Fighters, Chaotix, dingoes, and Deo Volente try to come up with a plan, but Mogul interrupts them and levels their hiding place. As Mogul prepares to deal the final blow, a portal opens up behind him. Sonic and Knuckles, holding several Power Rings on their arms, launch a surprise attack on him. Furious, Mogul attacks them with his Chaos Emeralds fueled energy, inadvertently transforming them into Super Sonic and Hyper Knuckles.

The duo punches Mogul through several buildings. As he regains his bearings he blames Athair's influence for Sonic and Knuckles' transformation, certain that they couldn't possibly transform without physical Chaos Emeralds in their possession. As he rambles on and tries to attack a vision of Athair, Sonic and Knuckles attack him once more, revealing a Chaos Emerald lodged in his chest. Mogul explains that the emerald in his cane was a phony and uses his powers to move the Floating Island in the sky as part of his master plan. Sonic and Knuckles are knocked aside and Sally asks them where Tails has gone. They assume that he must have gotten lost on the way back. Mogul tries to attack them, but is knocked aside by a robed figure with Power Rings on his arms. Mogul fires a blast of energy at the mysterious figure, transforming him. He says that he's finally become "Captain Super Fox-Man", but rechristens himself with the name that the voices in his head called him: Turbo Tails.

Mogul quickly comes to understand that the voices Tails spoke of were the Ancient Walkers, and that Tails himself is the long prophesied Chosen One. He goes on to say that Sonic, Knuckles, and Tails are destined to be the champions of justice in this era, but vows to not let the prophecies to come to pass. He boasts that he's beyond even Dimitri's former glory only to notice that Tails is holding Dimitri's Chaos Syphon. He concentrates all of his power on combating the Syphon's power draining ability, allowing the other heroes to attack him. Growing desperate, Mogul uses his emerald's powers to blast a hole straight to the Chaos Chamber, where the two Chaos Emeralds keeping the Floating Island aloft are kept. Mogul begins to absorb the emeralds' power and destroys the Syphon. In Haven, Sabre and Locke note that only the Ancient Walkers can truly master the power of Chaos and decide to use this to their advantage, bathing the island in a blinding light of Chaos energy as a transformation occurs.

The following morning, Sonic and Knuckles discuss their battle with Constable Remington in a battle-damaged Echidnaopolis. Knuckles is certain that some outside force was behind their survival, but decides to put his speculation aside when a member of the Echidna Security Team arrives with the Sword of Acorns. Knuckles, finally able to fulfill his promise, hands the true sword to Princess Sally. Some time later, as the Freedom Fighters prepare to leave, Sonic and Knuckles reconcile their differences. Sonic, bored with trying to rebuild Mobotropolis, suggests they team up and fight Dr. Robotnik's remaining Sub-Bosses. Knuckles declines, afraid to leave the island given all of the recent changes. He also reveals that Mogul is now contained within a single, massive Chaos Emerald—the Master Emerald—which is the only thing keeping the Floating Island aloft. Fearing the villain's future escape, Knuckles feels bound to remain on the island. Sonic talks to Tails, telling him that he is proud to hear he will be a great hero someday and asking if he would like to go on a little adventure.

Master Mogul: Unlike Dimitri, I have mastered my chaotic strengths and intend to...
Turbo Tails: Y'know, kinda funny how you should mention the "black sheep" of Knuckles' family!
Master Mogul: I...know...what...that...is...AGH! THE CHAOS SYPHON!

Locke: Whether it's the plan of Athair or the Ancient Walkers', I applaud its logic...
Sabre: ...but you're the one used to working covertly, leaving your intervention a mystery! Sort of unsettling when someone else does it to you, eh? 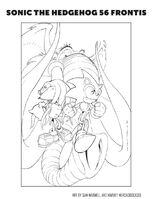