"Monkey Madness": Who says things are quiet now that there is peace on Mobius? The Freedom Fighters are at it again. This time against a new threat in the form of Eggbots. Controlling them from behind bars is none other than Snively. He is on the attack as he makes his first move toward seeking power. And that power shows up in the form of Monkey Khan, a cyborg monkey created by Robotnik years ago. Is he friend or foe? Only this story knows for sure.

Sonic, carrying Sally Acorn and followed by Antoine, pursues the Eggbots previously seen near Knothole Village. In spite of Antoine's complaints, Sonic refuses to slow down and tells Sally he's eager to leap right into the action. Fortunately, he refrains on this occasion when they spot the Eggbots with a large excavating machine. Antoine catches up and loudly greets his friends, nearly blowing their cover. Sonic quickly silences him and points out the Eggbots. Sally checks the area with Nicole, picking up a power signature on the dig site and another nearby. She wanders off on her own and discovers the source: a large metal crypt. Antoine accuses Sonic of acting stupidly, and Sonic questions Antoine's bravery in turn.

Sally, meanwhile, manages to open the doors to the crypt and discovers a living being inside. The creature reveals that he was sealed inside ten years ago by Dr. Robotnik, whom he claims turned him into the most powerful cyborg on Mobius. Back at the dig site, Antoine suggests that Sonic create a diversion while he and Sally investigate, only for Sonic to realize that Sally has vanished. The cyborg, having finished recapping his backstory, introduces himself to Sally as Monkey Khan.

In the Devil's Gulag, Snively requests a report from his Eggbots, who radio to their master that the Atom Drill successfully penetrated the outer crust on their dig site. The nature of the energy source is revealed to be an extremely strong Power Ring. Snively is dissatisfied, having hoped to locate Ixis Naugus. To the surprise of the robots, however, the ring floats out of its resting place and flies over to rest on the head of Monkey Khan.

Khan converts the ring into a crown and unleashes his fury, summoning a cloud to ride upon and utilizing its electrical abilities to destroy the Atom Drill and attack the Eggbots. Snively, overhearing the scuffle, decides to dispatch more Eggbots to deal with Khan. Sally tries to explain the situation to her friends, but when Sonic hears that Khan was given powers by Robotnik he decides to attack.

Khan is quick to fight back, but soon finds himself smitten with Sally when she tries to break up the battle. He swoops down and carries her off, ignoring her protests, while Antoine takes advantage of the opportunity to chastise Sonic for his lack of diplomatic skills. The duo chases after Khan, but runs into more of Snively's Eggbots.

Sonic and Antoine continue to argue while fighting the Eggbots. Despite being frustrated with Sonic's ego, Antoine saves him from falling into the pit dug by the Eggbots, and the two continue battling their robotic foes with their backs to it. Elsewhere, Monkey Khan attempts to woo Sally, only to be shot down for his egotistical attitude and informed that it stands in the way of his potential to actually be heroic.

Back at the battle site, Sonic borrows Antoine's sword and uses it to destabilize the ground beneath the Eggbots, toppling them into a pit. Despite the victory, the two Freedom Fighters remain pinned-until Khan and Sally return, the former using his lightning powers to fry several remaining Eggbots by way of an apology to Sonic. The Hedgehog then dispatches the few surviving units, and Snively agonizes over losing his troops. Khan and Sonic part as friends, Sally having helped Khan realize their similarities-though both could stand in need of improvement. The Monkey then takes off to enjoy his long-awaited release from captivity, while Sonic remarks that he wouldn't mind a vacation himself.

Robian Fanny Dupin is surrounded by an angry mob in Mobotropolis, who found her near one of Robotnik's old laboratories. A sudden flash of light blinds the mob, and Sir Charles Hedgehog appears at Fanny's side, having used photon flash pellets to produce the unexpected lightshow. The leader of the mob, whom Charles recognizes as Tusk Luza, accuses the pair of working together, while the Hedgehog calmly asks why the mob are accosting Fanny to begin with. He replies that Fanny was sneaking around Robotnik's lab, which has been declared off-limits to all citizens; Fanny responds that she went there on a dare from friends. Charles accepts her explanation as logical, but Luza and his cohorts are unconvinced, believing that all the Robians are a threat. He demands that they take the matter to Sally for settlement, which Charles readily agrees with. The group heads to Castle Acorn, only to find Sally absent, and are greeted instead by Geoffrey St. John, who asks to know what is going on. After hearing the matter out, he informs the group that Sally is out-due to investigating the Eggbots-and tries to postpone the matter, only for King Maximillian Acorn to enter the room.

Taking his throne, the king reveals that he has overheard the whole conversation and made a decision: to dismantle all the Robians on the charge of treason. Charles objects to the unjust proceedings, only to have Max remind him that he created the Roboticizer in the first place. Geoffrey tries reasoning with the monarch, only to be batted aside by the angry Max; just then, Sally returns with Antoine and Sonic from their mission. They are startled as Max goes into a tirade over his orders being questioned, only to suddenly become weak and pass out. Sally has Dr. Quack summoned, only for a transmission to come in from Locke-disguised as his son Knuckles-requesting the Freedom Fighters' help on the Floating Island.

Monkey Khan: You're poking fun at me, aren't you?
Sally: And why shouldn't I? 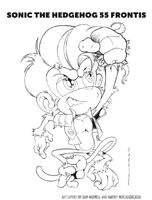