This is a definite Collector's Item! Which is why it's fitting that it should be called "The Big Goodbye!" The ultimate conclusion to the ultimate storyline in Sonic mythos. Who will Knuckles help: Sonic or St. John? Will Knothole Village be enslaved forever? How will the rest of The Freedom Fighters deal with current events? What is Robotnik's next move? Expect all this and more. This special issue sports a gold ink, computer-rendered, computer-enhanced cover and hosts/features almost every single Sonic creator- writers, artists, you name it- who EVER worked on Sonic- in one jam- packed issue. Also, learn the beginnings of Dr. Robotnik. Plus: Witness the coolest fight scene showdown you've been waiting for ever in the history of Sonic... Sonic Vs. Robotnik, once and for all the marbles. Last, but not least, there's a special surprise at the end that will leave you breathless!

The story begins with Julian, son of Ivo, being chased by a pair of Overlander troops, Londo and Jakkar. He trips and falls into a mud puddle, and they fly right past him. After the pair disappear, Julian is discovered by two Hedgehogs, Charles and Jules. They bring him before King Acorn. This is where Julian makes known exactly how much he knows about Overlander tactics. Julian is made warlord and leads the Mobians into battle against the Overlanders. It turns out this is all a dream in the mind of Robotnik, who is woken up by a pair of Swatbots. On the Floating Island, however, events are happening that would make Robotnik believe that he is still dreaming.

Sonic tries to convince Knuckles to help him, but Geoffrey St. John chooses that particular moment to inform Knuckles of Sally’s death at the hand of Sonic. Knuckles is shocked by this revelation and attacks Sonic in a fit of rage, which keeps Geoffrey from taking a shot a Sonic. Sonic manages to beat Knuckles and starts to flee, however, he is captured by a concealed Espio. Geoffrey tries to get Knuckles and Espio to turn Sonic over to him, but Knuckles doesn’t take orders from anyone.

Dulcy wakes up, and breaks up the little standoff on the Floating Island. It is at this point that Dulcy reveals that Dragons cannot tell lies, which gives them the unique ability to be a living lie detector. She knows that Sonic is telling the truth. This convinces Geoffrey that someone is trying to divide and conquer them. Knuckles decides to go to Knothole with them, out of respect for Sally. If only things were going as well in Knothole. The citizens are being rounded up for Roboticization. Rotor and Tails try to escape but are caught by Drago and a team of Combats.

At that precise moment Doctor Robotnik contacts Downunda, to check on his shipment of rare ore. Crocbot informs him that he is dealing with an uprising and that the ore has already been shipped. Robotnik cut the transmission and reveals his plan to use the Ultimate Annihilator to wipe out Knothole Village. Robotnik returns to his sleep chamber, wanting to be well-rested for the big day.

Sonic, Knuckles, and Geoffrey, working together, arrive and begin to liberate the people of Knothole. A battle ensues and Sonic begins to chase after the traitor Drago Wolf. Drago is running as fast as he can but Sonic is hot on his heels. Lone rock is thrown and hits Drago on the head. Sonic catches up with Drago to find that Hershey was the one who knocked him out. She explains that she was getting her revenge on Drago for duping her into killing Sally. Sonic doesn’t blame her, his mind too focused on the true mastermind of this plot.

Meanwhile, Robotnik awakens from his nap as the cargo from Downunda arrives. He is informed that Sonic has freed Knothole Village, and Robotnik does not take that news well. Antoine and Bunnie quickly explain how Walt and Barby help them escape and overhear Robotnik’s fiendish plan.

Snively informs Doctor Robotnik about Sonic’s impending arrival. However, Robotnik has other plans for the Rodent. Sonic begins to fight his way through Robotnik’s Headquarters. Sonic keeps flying through the base and comes face to face with Snively. The two face off in a decidedly one-sided fight, with Snively being defeated very quickly. Sonic then runs off heading towards Robotnik but ends up running into something.

As it turns out he smacked right into Antoine and Bunnie. The two explain the bomb they planted on the Ultimate Annihilator and how they have to get out of there. Sonic tells them to go on ahead, he has a score to settle. By taking out the last few remaining SWATbots Sonic makes his way into Robotnik’s Control, where he finally comes face to face with the evil tyrant.

In the small confined room, Sonic, being unable to use his speed, gives Robotnik the upper hand in their fight. Using the small window of opportunity given by his punch, Robotnik proceeds to fire the Ultimate Annihilator at Knothole village, seemingly destroying it. Sonic, enraged by the loss of everything he holds dear, punches Robotnik straight through his chair into the far wall. Robotnik rises, and the battle begins between the archenemies. They hold nothing back; it is nothing but one punch after another, each matching each other blow for blow. The control room is pandemonium, as the two combatants duke it out, with Robotnik and Sonic fighting so fast that it’s difficult to keep up. Sonic finally grabs Robotnik by the collar and Sonic raises his fist, screaming with rage at the evil doctor. The two prepare to exchange each other a final blow, screaming, when the Ultimate Annihilator explodes.

Nothing but an empty white void... then from out of nowhere Sonic’s hand appears. Somehow he had managed to survive, but he is so exhausted, he passes out as medical personal arrive on the scene.

Sonic awakens in Knothole under the care of Doctor Quack. It is here that Quack explains that not only did Knothole survive being fired on by the Ultimate Annihilator, but also how this whole mess was his fault. That Robotnik had detected the Neutron Chip in the Dream Watcher and located Knothole Village. Robotnik had Quack brought before him and explained the whole thing, and then as insurance had Snively kidnap his wife and children to force him to cooperate. He explained how Robotnik managed to turn Drago, and watched as Snively sabotaged the Ultimate Annihilator to affect only one person, his uncle Julian. Quack was praying that was what would happen did, and Robotnik is dead. After Quack had finished, Sonic asked about Sally. Quack explains that he falsified her medical records. Sally did not die; she’s in a coma. Sonic rushes off to see her.

Sonic finds Sally in her glass memorial shrine. Ever so gently, he opens the glass top and leans forward. He admits his love to her, and gently kisses her on the cheek, asking that she should come back. Sally’s eyes flutter open, and she asks what he said. A moment of shocked silence... and then Sonic sweeps Sally into his arms and kisses her passionately on the lips. Sally instantly responds by returning the kiss. After finishing the kiss, Sonic pulls Sally to her feet. In his way, Sonic tells her the truth, that he’s happy to see her again. This is followed by a quick wrap-up: the real King Acorn is found, Doctor Quack is exonerated of his crimes and reunited with his family. Hershey is pardoned, the Freedom Fighters are planning a huge party, Geoffrey St. John gets his old job back, Drago is arrested and sent to the Devil’s Gulag and Snively’s fate is left unknown.

Robotnik: Well what of it? What? Wipe the grease out of your tin-plated earlobes, twits! That rodent is nothing to me! He less than nothing! And that's pretty danged small, if you ask me!

Sonic: Okay 'Julian', stop fiddling with those controls -- and turn around!

Robotnik: Oh how I hate that hedgehog...

Sonic: I love you, Sally! Please come back.
Sally: W--what did you say, Sonic?
Sonic: I said -- I'm just happy to see you again 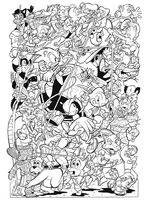 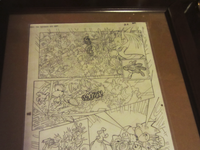