The ultimate battle begins here! Sonic & the Freedom Fighters, with the help of Lupe and the wolfpack, launch what may very well prove to be their final assault on the evil Dr. Robotnik. Lines are drawn, trust is shattered, and the causalities mount. All of Mobius stands on the very brink in this pulse-pounding first act to one of the most epic Sonic tales of them all!

Sonic, Sally, and the other Freedom Fighters are on an assault mission in Robotropolis. Sonic uses a grappling hook to get to a rooftop, using his speed to run up whilst carrying Sally. The Wolf Pack observe from a farther distance, Drago saying that they should have joined them, but Lupe Wolf remarks that the Pack is not independent, and has Drago signal for the other Freedom Fighters and Dr. Quack. The physician complains that he is not fit for combat situations, but Antoine reminds him that they may require his assistance in case of an emergency. Upon receiving communication from Drago and the Pack, he orders them to wait until Sonic and Sally give the signal. The Freedom Fighters briefly discuss Antoine's tense attitude, but proceed to turn their attention towards Sonic and Sally. Sonic finds Sally looking unwell, but Sally assures him that she is feeling fine, while at the same time contemplating a recent conversation with her apparently recovered father. The King, acting very secretive, summoned her to inform her that he suspected Sonic of being a traitor, and ordered her to go on the next mission along with Sonic to test his loyalty. Although overwhelmed by her father's strange behavior and accusation against her friend, Sally remains confident that Sonic is still on their side.

The two split up, Sonic crawling into a ventilation shaft, and Sally climbing down a rope on the side of the building. Robotnik, observing through a security camera, activates laser guns, forcing Sally to evade the attacks while climbing down. The Freedom Fighters begin to panic, but Rotor takes out one of his latest cannon invention, and destroys the laser sentries. Antoine, observing through his binoculars, is surprised and joyed to see Sonic back at the building. The group begins to celebrate, but then fall into shock as they see Sonic cutting the rope. A stunned Sally falls to the ground at great speed, and makes a hard landing, forcing Bunnie to fly to her aid. Fortunately, the Wolf Pack arrive, and Robotnik sits in his chamber, gloating over his apparent victory. Sonic then bursts through to confront him, but Robotnik activates a laser trap to distract Sonic while he and Snively escape through a trap door. While Robotnik and Snively escape, Sonic uses a piece of metal to reflect the lasers and destroy the guns. Robotnik proceeds to activate a self-destruct trap, while the Freedom Fighters bring Sally to Dr. Quack, who informs them that they must retreat to Knothole. While the Wolf Pack stay to defend, the Freedom Fighters retreat.

Antoine takes control of the Fighters' plane, despite Tails' worries of leaving Sonic behind. Sonic arrives a few seconds later at the landing site, wondering where the others have gone to. Confused, he speeds back to Knothole on foot. Meanwhile, Robotnik and Snively arrive at Robotropolis South, and Robotnik begins to plan the next move. Back in Knothole, the Freedom Fighters-minus Sonic-and Rosie anxiously await outside of Dr. Quack's office on news of Sally, only for the doctor to appear and shake his head in dismay. The Freedom Fighters are struck with disbelief and horror at the loss of their leader, but become surprised as Sonic appears at the door. Geoffrey St. John arrives through the door and places Sonic under arrest, as his associate Fleming places him in handcuffs. Tails begs that Sonic didn't do it. Sonic seems astonished, but then learns to his horror that Sally is dead and that he is the culprit. Elsewhere, Drago enters a hut to meet with his girlfriend Hershey Cat, gloating over the success of his plans. Soon, Sonic is brought before the people of Knothole to stand trial for his supposed crime, but the King refuses to believe his denial. Rather than have Sonic executed, he orders him to be imprisoned at the Devil's Gulag, while Robotnik and Snively observe through a secret camera with great amusement.

Sonic: First we gotta get where we're going (launches a grappling hook) and the only way to get there (runs up it with Sally) is if you get there with style! Hang on, Sal!
Sally: Do I have any choice?!

Sonic: Could someone please EXPLAIN what's going down?
Geoffrey: You are, mate! For the murdering the princess!!
Sonic: Are you insane?! 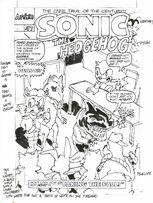 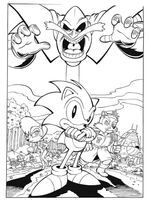