Robotnik's using biological warfare to infect the Freedom Fighters with the deadly "French Frirus!" Now, Sonic must shrink himself to microscopic size to save his friends, but who will save him from the sinister Paris-Site?

Sonic arrives in Knothole and is annoyed to discover that there is no one waiting for him. After searching the village he realizes the place is deserted. Rotor grabs Sonic from behind and pulls a hospital mask over his face. Noticing Rotor is extremely ill, Sonic helps his friend head toward the lab. Inside, Sonic finds that the rest of the Freedom Fighters have become deathly sick as well. Sonic asks Rotor what happened, and he explains that they decided to order fast food from a new restaurant called "McRobo's". It turns out that the restaurant was a trap set up by Dr. Robotnik and their french fries were laced with microscopic, robotic germs, giving them the French Frirus. Pulling out the reduce/enlarge component from the roboticizer that transformed Bunnie, Sonic shrinks himself to microscopic size.

Sonic heads inside Rotor's body and meets the Auntie Bodies, the embodiment of Rotor's natural immune system. She informs him that she and her counterparts inside the other Freedom Fighters have given up battling the French Frirus. Refusing to let her pessimism get him down, Sonic moves deeper into Rotor's body. A series of sores along the membrane walls, the French Foreign Lesions, spew puss all over Sonic. Sonic counters by cutting them off with a Spin Dash. Sonic assumes that takes care of the French Frirus, but is suddenly attacked.

Sonic is confronted by the ringleader of the French Frirus, Paris-site. Sonic challenges Paris-site to a duel, but he simply calls on his henchman, Fever, to deal with Sonic. Sonic is unable to harm Fever, but Auntie Bodies, inspired by Sonic's courage, steps in. They work together to defeat the disease, and the Auntie Bodies of the other Freedom Fighters soon defeat their own foes. As the Freedom Fighters start waking up, Sonic leaves Rotor's body. However, he realizes that he's still stuck at microscopic size. Thinking quickly, he enters Rotor's nose and triggers a sneeze, sending himself flying towards the component and restoring himself to normal size. With the Freedom Fighters back on their feet, Sonic makes his friends his auntie's recipe for chicken soup.

A shadowy figure is watching Knuckles continue his quest for Archimedes and the missing Chaotix. While watching his many monitors, he notes that the Chaotix and Knuckles do not understand the big picture. He could lead the way for Knuckles to find out, but he feels that this will prevent Knuckles from gaining wisdom that will help him improve himself.

He decides not to help him find the way to the big picture, which Knuckles will be able to find at Mount Fate. 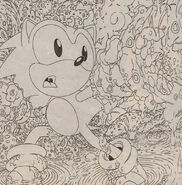 Sonic the Hedgehog comics
Retrieved from "https://sonic.fandom.com/wiki/Archie_Sonic_the_Hedgehog_Issue_33?oldid=2134248"
Community content is available under CC-BY-SA unless otherwise noted.