The Super Sonic Warrior returns in "Genesis of a Hero" Part Three: The 25th anniversary celebration continues with another blast to the past! Which is also to the future, and the past, and back again! When Sonic goes to see the annual return of Little Planet, he’s surprised to find it chained to a mountain! Join us for the exciting adventures of Sonic CD! Featuring cover art by the legendary Patrick Spaziante plus a “Cosmic Eternity” variant by Mr. Sonic comics himself, Tracy Yardley!"

Sonic arrives at Never Lake finding the planet named Little Planet chained to a mountain. He finds out that Dr. Eggman was up to his regular antics again, even after his previous adventures, and decides to stop him once more. Before Sonic could head off, he is stopped by Amy Rose, an admirer who claimed that her fortune told her that she was destined to meet the "hero of her dreams" at Never Lake. Sonic did not exactly believe this and took advantage of Amy's promise to follow him wherever he went by telling her to meet him on Little Planet.

At Palmtree Panic, Sonic wonders where Eggman found the time to make so many Badniks as it was not too long ago that he destroyed the Death Egg. Elsewhere, Eggman receives a status update from Dr. Snively on Angel Island, who says that they were behind schedule as Carnival Night Zone was taking up too much time and forces to build. Sonic arrives on the scene and Eggman accidentally blurts out that he will collect all the fabled Time Stones, rewrite history and finally beat the hedgehog. Following this, Eggman proceeds to fight Sonic in his EGG-HVC-001 mech but is eventually defeated. The evil doctor wonders why that was as he reinforced the mech, suspecting that Sonic had done something to weaken it.

Sonic then orders Eggman to unchain Little Planet when he is suddenly interrupted by a surprise hug from Amy. Eggman takes advantage of this to make his escape, while taking Amy into account. Sonic sarcastically thanks Amy for her help and asks how she caught up to him. Amy replies saying that she was ten times as determined as Sonic, despite her speed not being able to match his. Finding this both creepy and impressive, Sonic suggests that Amy goes home but she stays put as she felt that nothing bad would happen to her as long as she was with her hero.

Suddenly, a robot appears before the eyes of both Sonic and Amy, kidnapping the latter. Impressed by the Super Badnik's speed, Sonic gives chase. The hedgehog travels through more Zones, journeying through time via Time Warp Plates and along the way finds out that Eggman wanted to use the Time Stones to invade the past in order to rule the future (or already did). He destroys the Badnik Factories in each Zone, creating good futures and later runs afoul of a hologram of the Super Badnik that was disturbing the local mobini. Sonic eventually arrives at Stardust Speedway and is told by Eggman that he will only be allowed to rescue Amy if he beat his Super Badnik in a race, who was revealed to be named Metal Sonic. Should Sonic fail, he would be disintegrated by a laser beam fired from Eggman's upgraded Egg Mobile. Sonic accepts these terms and gets an easy headstart on the robot. Sonic and Metal Sonic have a tight race around the track but Sonic ultimately prevails, leaving the Super Badnik to be destroyed by a closed door.

Sonic finds Amy tethered to a pole and is glad to hear that he did not keep her waiting too long. Amy then tells him once again that her cards did not lie and he truly was her "destined hero." Eggman angrily tells Sonic that it was not over and that once he got his UFOs back online he would defeat the latter once and for all. Amy asks what he meant by that and Sonic replies saying that Eggman had been using items called Time Stones to invade the past and he had run into sign posts that ran on their power. Sonic then forms a plan to find at least one Time Stone and go back in time to make sure Eggman does not conquer Little Planet. As Amy was prepared to follow Sonic even through time, the duo set off in search of Time Stones.

Ivan "Bad Egg" Robotnik is being taken away to his cell by Officer Sonic and he asks him how long he will be in jail. Officer Sonic tells Bad Egg that he asked the judge to be lenient and he would have to do some community service. Soon, Bad Egg is seen helping Mobinis cross the street and is almost run over by a speeding civilian on a motorcycle. This prompts him to yell at the driver, asking if he knew that he had to go slow.

Dr. Eggman: Ah! Sonic! It's about time you showed up!
Sonic: I get it. Because of the Time Stones. "Funny."

Sonic: "Metal Sonic," huh? That's pretty cool. Kinda lame that all that style and power is for kidnapping civilians, though. 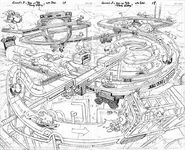 Sonic the Hedgehog comics
Retrieved from "https://sonic.fandom.com/wiki/Archie_Sonic_the_Hedgehog_Issue_290?oldid=2136175"
Community content is available under CC-BY-SA unless otherwise noted.