to Sandra Jo and Mai Kiyotaki at SEGA Licensing.

The SUPER DUPER DUO of SONIC and TAILS unite in "Genesis of a Hero" Part Two: The 25th Anniversary celebration of Sonic the Hedgehog continues in this retro-action adventure! Sonic has chased Dr. Eggman clear across Westside Island, and now into the skies! Can Sonic and Tails survive a head-on assault of the Wing Fortress? And what sinister secrets lurk beyond the clouds? Featuring cover art by veteran Sonic comic artist Patrick "Spaz" Spaziante and a "High Flying Variant" by jammin' Jamal Peppers!

Genesis of a Hero Part Two: Coming Back For More

In the skies above Westside Island, Sonic and Tails are flying with the Tornado to chase after Dr. Eggman. During so, Sonic recklessly destroys incoming Badniks much to Tails' worry. They soon approach the Wing Fortress only to be shot at by incoming artillery. Sonic manages to land on a platform to dodge one of the shots but it hits the wing of the Tornado that he stood on instead. This causes the Tornado to spiral downwards along with Tails in it. Sonic frantically yells for Tails to fly out of the plane but the young fox ignores him, repeatedly saying that he can fix it.

Believing that Tails was gone, Sonic runs through the ship's traps and trials, eventually reaching the control room where Dr. Snively is piloting the fortress. Snively activates a force field similar to the one Eggman used in Scrap Brain Zone to prevent Sonic from advancing and also opens a small hatch above the hedgehog which produces small spiked platforms. Sonic easily dodges them but he is brought to a halt as the hatch becomes a cannon and fires a laser that forces the speedster backwards. Luckily, the cannon eventually runs out of power an Sonic proceeds to destroy it by kicking a spiked platform into it.

Snively flees while Sonic mocks his efforts to defeat him. The barrier then lifts and Sonic chases after the skittish doctor. Sonic finds Snively outside escaping in the Egg Jet, leaving the hedgehog stranded. However, Tails suddenly appears in the Tornado after having fixed it like he said he would. With the Tornado's new built in thrusters, Sonic and Tails chase after Snively, only for the devices to slowly give out. This prompts Sonic to jump and hang on to the Egg Jet as it flew out of orbit.

Snively calls Dr. Eggman only for the latter to shout at him for not bringing the Wing Fortress as it contained all of their supplies from Metropolis Zone and for allowing Sonic to follow him to the Death Egg. Snively is surprised that Sonic did so and Eggman tells the former to just dock as his "anti-Sonic countermeasure" was ready to go. Sonic sees the Death Egg and is shocked at the size of it, though realizes that Eggman dug up so much resources from the Acorn Archipelago that he would be surprised if there was any metal left there. Sonic also wonders if the Death Egg was something like a weapon, Roboticizer or a mixture of both, still knowing he would have to destroy it regardless.

Snively eventually docks the Egg Jet in the hangar and runs away while Sonic catches his breath. Uninterested, Sonic takes his time to find Eggman while marveling at the view of the world from the Death Egg. Sonic is then locked in a room and Eggman tells him that he is properly prepared for him. Sonic does not believe him until Eggman's newest Super Badnik falls from above; Silver Sonic. Sonic avoids Silver Sonic's punches and dash attacks, noticing that though it was stronger in terms of raw power, its armor and bulky exterior weighed it down. This gives Sonic a major advantage and the hedgehog proceeds to hit Silver Sonic multiple time. The robot then topples backwards and breaks apart, revealing Eggman and Snively behind a door.

The doctors begin to run away to which Sonic asks why they would as he was evidently faster. Realizing he had a point, Eggman throws Snively at Sonic to slow him down. Eggman then jumps down a hatch which irritates Sonic. As Sonic asks what was now happening, Eggman emerges in his Egg Destroyer Battlesuit telling the hedgehog "Now you DIE!"

Officer Sonic calls in dispatch in aid of catching Ivan "Bad Egg" Robotnik. Robotnik keeps up his intense speed only to be later cut off by a spiked road. Bad Egg then calls Sonic a cheater as he called for backup but said nothing about a frontup.

Tails: --Sonic! Be careful!
Sonic: Where'd the fun be in that?

Sonic: Found you, Needle-nose!
Dr. Snively: Gah! How do you dodge bullets?!

Dr. Eggman: BWA HA HA HA! Welcome to my Death Egg, Sonic--and your doom!
Sonic: Eh...it's catchier than "Scrap Brain," I'll give you that much.

Sonic: Guys? Seriously? You're trying to run from me?
Dr. Eggman: He has a point.
Dr. Snively: He does? 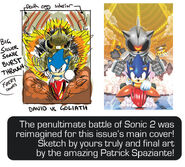 Concept artwork of the regular cover.
Add a photo to this gallery 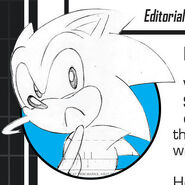 Sonic the Hedgehog comics
Retrieved from "https://sonic.fandom.com/wiki/Archie_Sonic_the_Hedgehog_Issue_289?oldid=1909584"
Community content is available under CC-BY-SA unless otherwise noted.