to Sandra Jo and Mai Kiyotaki at SEGA Licensing.

SONIC is BACK in “Genesis of a Hero” Part One: It’s Sonic’s 25th Anniversary and we’re celebrating in style—retro-style that is! See Sonic in his first climactic show-down with Dr. Eggman, straight from the gameplay of the first Sonic the Hedgehog game! But what happens after the battle? And what new force arises once the dust has settled? It’s the story you know with a new twist! Featuring cover art by the legendary Patrick Spaziante and a “Best Buds” variant by the lovely Genevieve FT!

Genesis of a Hero Part One: Where It All Began

In Scrap Brain Zone, Sonic the Hedgehog has finally caught up with Dr. Eggman and Dr. Snively. He tries to get the doctors but runs into a sudden green force field, much to Snively's surprise that the trap actually worked. Sonic notes, however, that they had not won. Eggman admits that Sonic had set back his mining plans and Snively adds that they had not found one Chaos Emerald, that many Badniks were destroyed and they kept getting beaten by the hedgehog. He almost adds another point but keeps his mouth shut upon seeing Eggman's glare. Chuckling at the duo's dynamic, Sonic promises to destroy the rest of the Badniks once he stopped them. With this, Eggman jumps on a switch that makes the platform below Sonic's feet collapse. Helpless, Sonic falls to the bottom while Eggman and Snively walk back to base.

Sonic finds himself in another water-logged area with unnaturally purple colored water. He runs through and successfully makes it to the end. While monitoring him, Snively worries that Sonic would find the pipeline leading back to base. Eggman tells Snively that they would end Sonic once and for all using his engine pistons, though the latter noted that they made him nauseous.

Like Snively guessed, Sonic finds the pipeline leading back to the Final Zone. Upon entry, he is almost crushed by a piston controlled by Eggman. Snively also controls one and Sonic continues to dodge these effectively. At several points Sonic also has to dodge spark balls created from an electric generator. Eventually able to stay on his feet, Sonic counterattacks by hitting Eggman and Snively's pistons. He continues this until a computer voice alerts the area that the damage threshold was exceeded and the automatic shut-down was initiated. The Final Zone starts emitting sparks which irritates Eggman. A hatch-door then opens much to Sonic's satisfaction.

Eggman and Snively are seen trying to escape to Mobotropolis in their Egg Mobiles in hopes to have more success over there. Sonic runs in and hits Snively out of his Egg Mobile. This forces Snively to climb into Eggman's and the latter tells Sonic that it was not over. Accepting this, Sonic watches the doctors escape and runs back through all the Zones visited previously, only to stop in Green Hill Zone, where he had left the Tornado. Using it, Sonic departs South Island and heads to Westside Island.

Landing outside Knothole Village, Sonic is met by Miles "Tails" Prower, Sally Acorn, Antoine D'Coolette, Rotor the Walrus, Bunnie Rabbot and Walter Naugus, who has disguised himself as King Nigel Acorn. Sonic lets everyone know that he successfully defeated Eggman and Snively on South Island and he asks King Acorn how he arrived on Westside Island before him. King Acorn lets Sonic know that as South Island also belonged to the Kingdom of Acorn and that he found a transport after he was rescued. Rotor asks Sonic as to why Eggman was on South Island and Sonic replies saying that Eggman was looking for the Chaos Emeralds but with little success. Sonic also says that he found them instead but in the Special Zone. King Acorn asks Sonic if he was able to find all seven but Sonic tells him that he only found six, including the one the king gave him. The king regards this as unfortunate as he would need their power to reclaim the kingdom but Sally assures her father that they would win in the end.

With that, King Acorn leaves the children to their planning. Confused, Sonic asks what the king meant and Sally tells Sonic that they were going to take back Westside Island with Sonic. Rotor promises to help disarm any traps they found and Sally mentions that Nicole could help too as she could not ask Sonic to fight for the kingdom alone. Antoine pledges to follow Sally into battle and Tails eagerly shows interest in joining. Bunnie then gets up out of her wheelchair and is determined to free Westside Island while also getting back at Eggman for her new robotic limbs. Sonic then asks Sally if she had a plan to which she agreed and then Sonic energetically requests for the bunch of "Freedom Fighters" to get going. With this, the group of friends run off joining Sonic in a new adventure.

In the world of Waku Waku, a man named Ivan "Bad Egg" Robotnik is seen breaking the speed limit while tossing bombs onto the road. Officer Sonic notices this and yells at him to go slow.

Sonic: I'm no contractor, but this place doesn't look up to code, doc!
Dr. Eggman: Agreed! Why, just look at the rodent infestation!
Sonic: Ha! I'll make you eat those--

Tails: Didja do it, Sonic? Did you win?
Sonic: I kicked that Eggman's butt clear across South Island and sent him packing.
Tails: You are SO COOL!

Bunnie: Ah'm half robot because of that fat jerk. And now that ah'm standing, ah'm not gonna sit again. We're goin' to free Westside Island with or without you, sugar-hog.

Concept art of the regular cover. 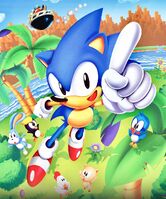