In Eggman Land, Sonic battles Dr. Eggman, who is piloting his new mech, the Egg Dragoon. Eggman orders Sonic to give up as he has complete control of the Dark Gaia energy, the Gaia Colossus and the fate of the world. He also mentions that his Egg Army will keep each chunk of the world weak and if anybody wanted him to be merciful and restore the world, they would have to meet all his demands.

Meanwhile, Sally and Antoine are seen holding down E-106 Eta, allowing Bunnie to powerfully punch the robot, destroying it. The trio decide to press on to the central tower and Sally asks Tails of his status. The fox was in his Tornado 2 firing at E-108 Iota and after taking it down, tells Sally that three more Super Badniks[1] were on their way with a Badnik Horde and that he has provided them with some cover. Sally, Antoine and Bunnie then move on.

Chip is seen trying to escape his capsule while Sonic struggles against Eggman. Eventually, the doctor freezes Sonic with a concentrated blast of ice and goes in for the kill with his Egg Dragon's drill arm. Luckily, the sun had set, turning Sonic into his werehog form. He tosses the Egg Dragoon backwards and dodges his incoming drill, impaling the mech. Sonic then proceeds to lift and toss Eggman in his Egg Mobile out into the open. Sonic then destroys the Egg Dragoon and soon finds Chip. After freeing Chip, Sonic planned to make use of the Chaos Emeralds but is suddenly brought to his knees...

Eggman complains how everything aches and orders Orbot to move the Death Egg to the spire immediately. However, Orbot advises against this as Eggman Land was sending him worrisome readings. Eggman looks on in horror as Eggman Land slowly spirals out of control and curses Sonic for ruining his plans. Sally is seen having trouble trying to shut down spire and the Dark Gaia Energy leaves all of the badniks. Bunnie notes that animals did not seem to be inside any of them. Tails alerts Sally that Eggman Land was breaking apart and they needed to evacuate. Sally still attempted to shut down the spire but it was too late as her Miles Electric short circuits, forcing her to make a swift escape with Bunnie, Antoine and Tails on the Tornado 2.

Off Panel "I found you, faker!" or "Prepare for trouble, it's Chip's evil double"Edit

Main cover, connecting sketch, by Vincent Lovallo
Add a photo to this gallery 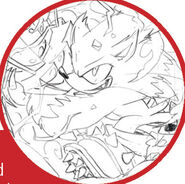 Interior artwork by Adam Bryce Thomas.
Add a photo to this gallery

Sonic the Hedgehog comics
Retrieved from "https://sonic.fandom.com/wiki/Archie_Sonic_the_Hedgehog_Issue_286?oldid=2170446"
Community content is available under CC-BY-SA unless otherwise noted.