CELEBRATE 275 ISSUES OF SONIC THE HEDGEHOG with his good buddy Mega Man and the worlds of STREET FIGHTER, BILLY HATCHER, NiGHTS INTO DREAMS, MONSTER HUNTER and more in this DOUBLE-SIZED ISSUE! “Worlds Unite” Part Eleven: It’s pan-dimensional pandemonium as the unified army begins their attack on Sigma! Sonic, Mega Man and X lead an all-star roster of heroes from across the SEGA and Capcom universes in an all-out assault against the villainous robot from the future! Will they be enough to save all their worlds, or has Sigma already become a god? Featuring a wrap-around cover from the legendary Patrick “SPAZ” Spaziante! PLUS 5 variant covers from Edwin Huang, Lamar Wells, Tracy Yardley, Rafa Knight and part 11 of the epic 12-part connecting variant cover series by artist Ben Bates! Don’t miss the penultimate chapter to the biggest crossover event in Archie Action history!

Picking up where the previous issue left off, the various heroes of the Unified Army are on a battleship. Sonic then makes a speech to Sigma stating that Sigma messed with himself and Mega Man, messed with their respective worlds, and thought he was clever to mix with various other characters' worlds as well. It then pans over the bolstered Unified Army, with Sonic stating that he and Mega Man are not the only heroes out there, let alone the only ones ready to fight Sigma. However, Mega Man whispers that he doubts Sigma is listening, with Sonic sheepishly calling Sigma a jerk and suggests Vyse get his attention. Vyse then tells them to ready the moon stone cannon, and then gives the order to fire as both Sigma's Mavericks and the United Army proceed to attack each other.

Meanwhile, on the Lost Hex, Dr. Eggman and Dr. Wily have arrived at the area and were sneaking through the fortifications. While Eggman notes under breath that he does not see any defenses, with Wily while whispering deducing that Sigma had arrogantly believed that he killed them while onboard the Sky Patrol when he earlier attacked it, but then briefly interrupts himself when he notices that Xander Payne is walking past them towards the Master Engine. Wily then asks Eggman if it was a good idea to have Metal Sonic deliver the final Chaos Emerald to the heroes instead of having them keep it. Eggman rebukes him, stating that they were about to access an even greater power via the Master Engine. However, Eggman does express his concern and suspicion regarding Xander Payne aiding them, especially considering he is an anti-technology zealot. Xander Payne, having overheard Eggman's remark, then tells them that it is because he has seen that he has to do it and that he must do it as his destiny, regardless of whether he personally likes the idea or not. To himself, however, he also remarks he will probably like the destiny just fine if said destiny requires that Eggman and Wily are to be sacrificed. He then tells them to catch up, as the Master Engine cannot be far, with Wily and Eggman expressing excitement, with Wily expressing which is better, warping reality to ensure they are gods, or using the Master Engine to get revenge on Sigma, with Eggman proposing a revenge-on-loop reality just for Sigma.

Back to the battle, NiGHTS and Firebrand managed to take down a Maverick hand, Sexy Silvia and Stella take down another Maverick, Ryu of Breath of Fire III and Ryu of Street Fighter proceeded to smash some Mavericks, and Vyse, Antoine D'Coolette, Ax Battler, Zero, and Rei manage to do numbers on the Guardroids. Sigma soon starts rolling out duplicates of his first body, but these fall just as easily before the heroes. As the battle wears on, the enemy forces soon begin to fall apart as does Sigma's body, apparently in defeat.

Any sense of victory is short-lived as Sigma bursts out in his smaller Sigma-3 body, the second form having been a mere cocoon as he prepared himself for his next step to godhood. Going on the offensive, Sigma's power is far greater than that of any of the Unified Army as he cleanly takes out anyone in his path. Down to their last card, Sonic breaks out the Chaos Emeralds and gives Mega Man a quick tutorial on how to use them. The two achieve their Super-States Super Sonic and Super Armor Mega Man and begin the final clash against Sigma.

In this Off Panel, Sonic, Mega Man and the Sonic Boom Sonic are about to celebrate the 275th issue of Sonic the Hedgehog, though it is pretty clear that all three are bored and unimpressed with the spectacle. Mega Man attempts to liven it up by equipping the Mama Beam and shooting a beam with Momma Robotnik's face, only for it to fizzle. Mega Man seems to be the only one excited, while Sonic Boom Sonic concedes it was not as impressive as he had hoped, and asked his main counterpart whether he had a happy 275th issue, causing his main counterpart to say "absolutely not" while having already left.

Cream: Right here, Mr. Sonic! Everyone was very brave in helping me guard them!
Comedy Chimp: <Ahem> Yes! All of us. Very brave.
Fastidious Beaver: I never took you for a pathological liar. 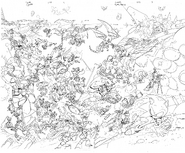 Page thirteen inks
Add a photo to this gallery

Sonic the Hedgehog comics
Retrieved from "https://sonic.fandom.com/wiki/Archie_Sonic_the_Hedgehog_Issue_275?oldid=2162373"
Community content is available under CC-BY-SA unless otherwise noted.