to Tyler Ham and Anthony Gaccione at SEGA Licensing

The contestants are brawlin' and the saga continues in 'Champions' Part Two! The fighting tournament for the Chaos Emerald is in full swing! Tails vs. Honey! Espio vs. Bean! Knuckles vs. Bark! But it's a sure bet that if a competition's going down, something's fixed with thugs like Breezie and Nack involved. Sonic will need some inside info - and he finds it from some surprisingly familiar faces! Featuring new cover art from Jammin' Jamal Peppers and a SWE (Sonic Wrestling Entertainment) variant cover by the indomitable T.REX!

Years prior to the present, Sonic and Breezie are in the Scrambled Egg Zone when a prototype version of Silver Sonic attacks. Stunned by the presence of yet another super-badnik, Sonic wonders how Dr. Eggman continues to catch them wherever they go, only to be informed by Breezie that she's been feeding information to Eggman the whole time they've been together. Outraged, Sonic informs her that Eggman has captured Tails and that he is trying to save him, and questions how she can allow a child to be threatened in such a way. A cold Breezie informs Sonic that she only cares about her own life and its comforts, and then unleashes Silver Sonic on him. In the present, Breezie reflects on her previous encounter with the hedgehog, and notes that despite her treachery Sonic still managed to save Tails and defeat Eggman-but that she's still able to manipulate him. As she enjoys herself in her office, Sonic finishes his first bout with Segata Sanshiro, and proves victorious. After an exchange with his opponent, Sonic waves to the crowd, but is then informed by Amy that it's almost sunset. Thanking her for the warning, he speeds off to his room and becomes Sonic the Werehog, and moodily settles in to watch the remaining matches on TV since he can't afford to be seen as the Werehog in public.

Amy wins her fight while Espio watches nervously. Elsewhere, Knuckles and Chip find one of the Master Emerald shards on a lady dressed with jewels and managed to get from her. Knuckles is surprised to see Tails on the screen, and knows that if Tails is there, so, too, is Sonic. Scratch appears, looking like he is about to attack, but he cheerfully tells Knuckles he'll be late for his match, confusing the red echidna, who doesn't remember entering the tournament. Chip points out that he could win the emerald, and Knuckles gets in the mood.

Tails and Honey start their fight and Honey wins by distracting him, while the Freedom Fighters watch, Cream shouting that she cheated in an outburst, giving everyone (except Bunnie and Big) huge gasps. Espio starts his fight with Bean, with Bean winning by avoiding all of the chameleon's attacks whilst provoking him with offensive words before finally tripping him straight out of the ring, much to Vector and Charmy's dismay. The next fight is between Knuckles and Bark, with Team Dark and parts of the Egg Army watching: in Soumerca, Thunderbolt is angered to find two of her men slacking off as they watch the bout, while in Efrika, Axel notices his mechanics cheering as well. As Knuckles finishes Bark off with one last punch, Rogue and Omega cheer with two G.U.N. soldiers looking on in confusion; Shadow, apathetic, just sits back on the couch. Amy and Honey cheer in excitement, while Tails and Espio are still down over their loses. Amy tries to console Tails to no avail. Honey tries to get Tails to look on the bright side with information on the next round: since she eliminated him, he won't have to fight against Knuckles. Amy is horrified, as she realizes she'll be fighting Knuckles instead; Honey, meanwhile, will be fighting Sonic.

Later, Nack is on the phone talking with Eggman, while Bean gives an unconscious Bark, who is being taken away by two doctors, a supportive thumbs up. Although he and Bean will be advancing to the next round, Nack knows they'll be going up against Sonic at some point - a fight he doesn't seem very sure they can win. That said, he asks Eggman if he wants them to resort to the backup plan (sabotaging Casino Park's defenses) to save trouble, but Eggman says he doesn't, as he wants to beat Breezie at her own game and savor that. However, he tells the Hooligans they'll start playing the game his way if they fail, and at that point, Sonic won't be fighting for just the emerald—he'll be fighting for his life, too. On the monitor screen behind him, Metal Sonic flies through the air, en route to Casino Park...

The 6-S express their feelings over being joined by another Adventures of Sonic the Hedgehog veteran, prompting Grounder to bring up others such as Wes Weasely. Breezie starts wondering if she made a mistake agreeing to be in the comics, but is informed by Mama Robotnik that she has no choice now that she's two issues in. 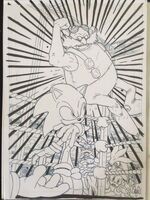