Catch some sun and ride the wave as the aquatic adventure continues in 'Waves of Change', Part 3! Sonic faces a city invasion by the ominous Dark Gaia Creatures! To make it even worse, the invasion is underwater - and Sonic can't swim! As the struggle turns desperate, will it be Amy's mission to find the key to saving them all, or will Sonic be left to drown? Then, in 'Light in the Dark', the Freedom Fighters find what they're looking for - but will their own divisions bring them down? Featuring new cover art from Ben Bates and an extra-special 'monster movie' variant from artist T.REX!

Waves of Change Part Three: Terror in the Deep

As the Dark Gaia monsters rush the Eusebes Shrine, Sonic, Rotor, Amy and Razor fight back. As they destroy a few Dark Gaia monsters, the heroes figure out that the monsters are made up of the same stuff that Sonic breathed in not long ago, with Amy telling him that, and Sonic telling her to focus on the monsters. The heroes destroy the last of the monsters, while Coral tells them that the shield is down, and Meropis must be overrun with the monsters; Sonic and Rotor take two air charms and get moving.

When Sonic and Rotor reach the city, Captain Striker and the city guard, as predicted, are fighting a difficult battle against the Dark Gaia monsters. Sonic and Rotor help Striker defend the city, with Sonic asking Striker if he can send a backup to the shrine to help Amy and Razor. Striker says they need to get the situation in the city under control, but they will help the shrine in due time. Sonic and Rotor talk about Striker's decision while destroying Dark Gaia monsters; then they run into the Dark Guardian. Back at the shrine, more monsters have started to attack, but Coral is determined to get the shield up. Pearly the Manta Ray and the Chao of the shrine almost get jumped by a Dark Gaia monster, with Amy destroying it and getting Pearly to lead the Chao and herself to safety. Pearly comes back out of hiding, telling Amy that the air charms Sonic and Rotor took weren't fully charged, and likely out of air.

Back in Meropis, Sonic and Rotor seem to be winning against the Dark Guardian, but after knocking it down for a moment, the air in their air charms starts to run out. Rotor tries to take both of them back up to the surface to get air, but the Dark Guardian grabs them both and throws them onto the ocean floor. Rotor tries to fight back, but Sonic has lost his air charm and all ability to breath. The issue ends with Rotor in the Dark Guardian's grip, the city guard overwhelmed, and Sonic not being able to breathe, while starting to give in to the Dark Gaia energy inside of him.

Light in the Dark Part Three

Sally, Antoine, Nicole, and Tails are fighting the reactivated badniks to get to out of a crystal mine with the purple Chaos Emerald, letting Dr. Eggman know they took the Emerald so he wouldn't destroy the beautiful crystals in the mine searching for it. When they see the exit, the group runs into an E-1000 model. Nicole's physical form gets shot, and Antoine takes Nicole's handheld to Sally; the team then destroys the E-1000 and gets out of the mine and back to the Sky Patrol. On the Sky Patrol, the team regroups with Cream, Cheese, Big, and Bunnie. Nicole thanks Sally for letting her see something special, and they talk about the Shattered World Crisis while watching the sunset.

Sonic: Still mad we came here uninvited?
Striker: Yes. But you have my thanks all the same.

Amy: Pearly, what are you doing out here? You should be hiding somewhere safe!
Pearly: I-I was going to! C-Coral taught me it's our job to take care of the Chao!
Amy: So what's the holdup?
Pearly: I-I can't! The Chao are just so...so... [looks in fear at a scared Chao] ...Creepy!
Amy: Don't ever tell Cream that...

Bunnie: Mah stars, look at that rock! So, Sugar-Twan, were you planning on upgradin' mah wedding ring?
Antoine: Oh... Ahem... Ma Cherie... I mean to say of course. You are worth something so grand, but...erm...
Bunnie: You know I'm pokin' fun, right, sugar?
Antoine: Mais oui! Haha...ha... *Cough* Of course, were I to get for you ze Chaos Emerald, it would be the green one, to match your eyes, non? 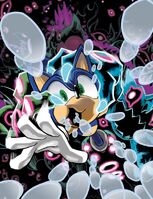