The 'Countdown' is over, the 'Chaos' has just begun! 'Damage Control': The shattered world is causing chaos everywhere, and Station Square is about to implode! Sonic and the Freedom Fighters must spring into action to save the day, unless someone beats them to the punch. Cue: Dr. Eggman. Will the evil doctor be the one to save the world? Or will his newfound power give him ultimate control? Covers by Rafa Knight and Lamar Wells!

The story begins with Team Freedom and Team Fighters trying to save Station Square from the chaotic damage made by the tremors. As the team works to rescue the city, they also try to rescue Twinkle Park, which is being flooded. Sally has a conflicting breakdown with herself, but Nicole and Cream are able to set her straight and back on her feet. Meanwhile, Dr. Eggman, Orbot, and Cubot are looking at the massive damage made by the tremors. The doctor finds some information on Prof. Pickle at Spagonia University, and sends his troops out to capture anything and anyone to do with said professor. Back at Station Square, Sonic is having a hard time rescuing a child and a young Mobian from a flooded building. Unusually fatigued, he almost transforms into what is assumed to be the Werehog, but is rescued by his team before the transformation is fully complete. Sonic vows to rescue everyone and everything, until an Omochao tells him it "won't be necessary". Amanda Tower of G.U.N., the "voice" of the Omochao, thanks them for their support and for rescuing the civilians. Later, while Nicole and Cream are talking with the King and Vanilla, Sonic openly admits he's tired, which is rather strange for someone like himself. Later, as Sonic feels his teeth because of his recent incomplete transformation, Tails admits he's worried about their past alternative lives, but Sonic tells him not worry. However, when Tails wasn't looking, an expression of worry is evident on Sonic's face. Sonic, knowing for a fact that there is something very wrong with him, asks to talk to Chuck at Spagonia University. Muttski answers the call on his Miles Electric, in horror and shock. He worriedly cries out that Eggman had kidnapped both Professor Pickle and Chuck, as well as all their samples and tests.

Sonic and Eggman are together in a scene, with Sonic expressing excitement over a new adventure beginning, while Eggman is just glad that the revisiting of old material has ended. Sonic jokingly asks if Eggman "like(s) retro"; the scene then shifts to a black and white scene with cartoonish versions of Sonic, Tails, Knuckles, and Amy running away from a pajama clad Eggman who yells "I greatly dislike that Needlemouse!!!" 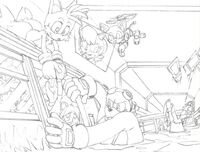