Go Ahead, Mecha my Day

In the adaption to Sonic CD for the Sega Mega-CD, the Freedom Fighters discover a zone portal to the Collision Chaos Zone! Robotnik tries to lure Sonic into the zone portal by kidnapping his #1 fan: Amy Rose. Tails investigates from the air and is captured as well! So to rescue both Amy and Tails, Sonic must race through the new zones and do battle with Dr. Robotnik's newest invention - The Metal Sonic!

In Freedom HQ, Rotor is fitting a device into one of Sonic's shoes. The device, which Rotor dubs "the Sonicam", is a high speed fiber optic camera that relays information back to Freedom HQ and is equipped with a slow motion compensator to keep images clear no matter how fast Sonic moves. Sonic, trying to figure out how to use the device properly, asks if the camera faces wherever his toe points. Rotor tells him he's right, but he still needs to watch where he's going; Sonic ends up running into a wall. Sally is confident that the device will be extremely helpful, telling the Knothole Freedom Fighters that they'll be investigating a newly discovered Zone.

Dr. Robotnik is boasting about his newest creation, the Collision Chaos Zone, to his Pirahna-bot. He explains that he created the zone to lure Sonic into his latest trap, but decides that he needs to come up with an additional incentive to make sure Sonic plays along. Robotnik opens up some Sonic fan mail he stole, specifically a letter from Sonic's biggest fan and admirer, a little hedgehog named Amy Rose. He sends his newest robot to kidnap the girl and sends a transmission to the Knothole Freedom Fighters, quickly accusing Sonic of being afraid to face the Collision Chaos Zone.

Sally tries to calm Sonic down, reasoning that it must be a trap, but Robotnik then reveals his hostage: Amy Rose. Sonic furiously spins and snorts at Robotnik's dastardly deeds. Ending the transmission, Robotnik orders Snively to disguise himself as a second Dr. Robotnik and follow Sonic in his Robo-Pod, burning up the Collision Chaos Zone behind him. Robotnik plans to wait for Sonic in the next zone, ready to spring an even deadlier trap.

Sonic stands before the other Freedom Fighters and demands to be allowed to immediately rescue his best pen-pal, Amy. Sally agrees that they need to rescue her, but that they can't go in without knowing the risks. Sonic blows it off and suggests they send Tails in to scout the area. Despite Antoine's objections and Sally's reservations, Tails flies towards Robotropolis and is immediately captured by a squad of SWATbots. Sonic, unable to wait for Tails any longer, races to the Zone portal. He finds a floating monitor transmitting a video feed of Robotnik. The doctor reveals that Tails and Amy are both his hostages now, and Sonic leaps into the zone to save them.

As Sonic rushes through the Zone, Robotnik contacts Snively, who begins burning up the trail behind Sonic. Thanks to the Sonicam, the Freedom Fighters discover that the "Robotnik" following Sonic is Snively in a costume. Sally wonders to herself why Robotnik would want Sonic to only head forward. Meanwhile, Sonic makes his way to the entrance to the next zone, wondering why he's had such an easy time so far. When he enters the next zone, he finds himself face to face with Amy's mysterious captor.

Amy's kidnapper is revealed to be none other than Sonic's newest robotic doppelganger, Mecha Sonic, who claims that Sonic has no chance of defeating him. He challenges Sonic to a race to the end of Stardust Speedway, informing him that Amy and Tails are waiting at the finish line. Sonic considers doubling back, only to spot the disguised Snively following behind him, forcing him to confront his robotic double.

Back in Knothole, the Freedom Fighters are no longer able to follow Sonic's confrontation due to the zone's energy field interfering with the Sonicam, and Sally decides to track Sonic down. Sonic and Mecha race through the zone, the former unaware that the real Robotnik is waiting for him at the finish line. The doctor asks Crabmeat to examine the finish line, only to test his final trap for Sonic on the poor robot: a crushing mechanism. Should Sonic beat Mecha to the finish line, Robotnik plans to spring the trap and crush the hedgehog.

Mecha Sonic demands that Sonic give up the race, but Sonic refuses to be stopped. Mecha reveals that the "Mecha Sonic" that Sonic was talking to was a hologram and activates a speed bump, tripping Sonic. Near the finish line, Rotor and Sally have arrived in a plane. Sally parachutes down to Robotnik while Rotor flies off. Sonic and Mecha Sonic reach the final leg of the race, and Sonic whips out his secret weapon: the Figure Eight Super Peel Out, which allows him to move at warp speed. Mecha Sonic tries to keep up, but the strain causes his body to overheat and his limbs begin to melt.

As Sonic crosses the finish line, Rotor shoots down Snively, Sally strikes Robotnik from above with a kick and stops him from activating the crusher, and Mecha Sonic crashes. Tails and Amy are overjoyed that Sonic won. Sonic reveals to a furious Robotnik that he saw the trap coming, and agrees to stand under the archway housing it so Robotnik can try it again. Robotnik presses the button, but Sonic simply steps out of the way just before the device crushes him. Astounded, Robotnik stands under the arch to examine it for defects, only for it to crush him. With Amy and Tails freed, the heroes celebrate their victory while Robotnik groans "I hate that Hedgehog!".

The Adventures of Scott and Paul

Paul Castiglia celebrates the comic's 25th issue. Assistant Editor Freddy Mendez asks Scott Fulop who the weird guy in the office is. Scott then explains that you always need to be prepared for intruders and hits a button on his desk, sending Paul falling down a trap door.

Robotnik: Why, Princess Sally... Isn't this a face you can trust? Have I ever lied to you?
Sally Acorn: No and Yes, disrespectively!

Robotnik: I hate that hedgehog! 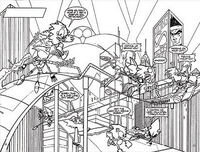