"When Worlds Collide" Part Six of Twelve: The crossover mega-event reaches its half-way point! On the eve of Sonic the Hedgehog's landmark 250th issue, Sonic, Tails, Mega Man and Proto Man are confronted by Drs. Eggman and Wily and the eight Roboticized Masters! Why do they look so familiar to Sonic? Do our heroes even stand a chance?! Featuring stunning new cover art from Patrick "SPAZ" Spaziante, and a special 16-Bit pixel art variant cover!

Sonic, Mega Man, Tails, Proto Man, and Rush are being attacked by the full compliment of Roboticized Masters: Rose Woman, Knuckles Man, Shadow Man, Silver Man, Blaze Woman, Vector Man, Charmy Man, and Espio Man. Sonic and Mega Man quickly reason that the robots are Sonic's other missing friends, with Tails noting that he must have been the first to be so transformed. Eggman and Dr. Wily rejoice in their genius, alternatively complimenting each other on their success. Disgusted by the display, Sonic is freed from Vector Man's crushing grip by Mega Man, who then confronts the doctors regarding their manipulations of reality through the Genesis Wave. The pair explain that while they succeeded in creating the Skull Egg Zone as a bridge between their worlds, they encountered a number of difficulties due to the differences between them. As such, they combined their innovations in order to create the Roboticized Masters, which have now allowed them to assemble the Chaos Emeralds, much to Tails' shock.

After a confused Mega Man is informed of the powerful nature of the Emeralds by Sonic, the doctors inform them that the Roboticized Masters' new mission is to eliminate the heroes in a tournament-style event. Proto Man refuses to play along, breaking away from the fighting to scout the doctors' fortress so that he can draw some of the Masters away and hopefully locate the captured Dr. Light. Bidding his brother farewell, Proto Man takes off using his shield as a sled. Wily, annoyed by Proto Man's refusal to comply-something he did even as Break Man-is then surprised as Eggman orders five of the Roboticized Masters to go after him. After explaining that he doesn't want to risk Dr. Light being freed, he orders the remaining trio of Masters-the Roboticized Chaotix-to eliminate Sonic and his remaining teammates. Forced to deal with the robots, Tails questions how he was returned to normal, and Mega Man reasons that it was a combination of his charged Mega Buster shot with Sonic's Spin Dash, as well as Mega Man's copying abilities. Before they can reason further, both are knocked off a cliff, forcing Rush and Tails to rescue them. Sonic takes charge, riding Rush to provide interference while Tails modifies the Mega Buster so that it will produce a blast with the combined power of a charged shot and a Spin-Dash.

Having observed the battle thus far, Wily suggests that he and Eggman return to the Wily Egg, and explains to a confused Eggman that they need to be at their base until Proto Man has been taken care of. He then mentions that Proto Man has a history of foiling him at the last minute, reminding Eggman of an old lackey of his. Sonic, engaging Charmy Man, tries to get into his usual banter mode, only to be grazed by first Charmy Man's stinger attack and then Espio Man's kunai. Mega Man laments that he's not helping, while Tails continues working on modifying the Mega Buster, prompting Mega Man to remark on his genius. As Sonic is increasingly overpowered, Mega Man begins to panic and urges Tails to hurry up, though the fox insists that he's doing the best he can. Vector Man then gets ahold of Sonic, but Tails finishes the modification just in time, allowing Mega Man to fire the blast. The attack restores Vector to normal, releasing an energy orb that Sonic tosses to Mega Man, which enables him to use Vector Man's acoustic Blaster attack. He then uses it to down Charmy Man, guessing that the sound attack must be the Robian Bee's weakness, which Wily seems to incorporate into all his creations. Restoring Charmy to normal, he takes possession of another orb and gains the Rapid Stinger power, while a groggy Vector is brought up to speed by Sonic.

Noting that Espio Man is missing, Mega Man is informed that the ninja is capable of disappearing, only for Rush to locate him by scent-right behind Mega Man. Sonic quickly hits him from behind, allowing Mega Man to fire his buster a third time, restoring the chameleon to normal. Sonic asks if Espio had fun, prompting the ninja to remark on the embarrassment of the whole situation. Mega Man helps him to his feet, and the grateful ninja presents his own energy orb to Mega Man, granting him the Chroma Camo ability. Mega Man is ecstatic over all his new abilities, especially given their potential usefulness in rescuing the other Robians. Sonic remarks that the whole idea is rather corny, only for Tails to accuse him of being jealous because Mega Man doesn't have an ego to match his. In gratitude for their rescue, the Chaotix offer Mega Man their services, and he asks them to help locate Proto Man while he, Sonic, Tails, and Rush go after the remaining Roboticized Masters. Locating the Wily Egg, the heroes set off to intercept it, unaware that they're being observed by the doctors. Eggman expresses his frustration over the situation, particularly Proto Man's success in eluding them and the restoration of the Chaotix. Wily, however, is unworried, as the properties of the Skull Egg Zone will allow them to "time-clone" any of his previous Robot Masters.

Eggman decides to send Shadow Man to intercept the heroes, but is then asked whether he's referring to the Robian Shadow Man or Wily's Shadow Man. The two doctors then hit upon the idea of sending the two of them together to attack the heroes. Eggman then recalls Blaze Woman and Silver Man as a precaution, while Wily encourages him to loosen up, reminding him of the many resources at their beck and call and the progress of their grand plan. Eggman acknowledges Wily's points, but suggests that they start working on a new vehicle to counter the heroes if they do make it to the Wily Egg. Eggman then questions why Wily has suddenly become more confident, and Wily responds that they have Mega Man's most valuable ally in their brig. That ally, of course, is Dr. Light, who is shown sitting helplessly in a prison pod next to that of Snively Robotnik.

Marine the Raccoon is shown in the office of Gilbert D. Stern and Roslyn Krantz from the regular Mega Man comic continuity, talking about all the amazing things they have in their world that does not exist where she is from. She then asks if they're friends of Sonic or Mega Man-getting the latter's name wrong-and then talks about how much fun the crossover has been so far. Unbeknownst to her, her constant chatter is getting Stern increasingly aggravated.

Proto Man: No. I'm not wasting my power fighting in some ridiculous tournament.
Dr. Wily: RIDICULOUS?!

Dr. Wily: Hmph! He never was much for cooperation. Not even as Break Man...

Tails: HRRGH! Are you two okay?
Sonic: Eh, I've been hit by worse.
Mega Man: Same. Sonic, I need you to...
Sonic: What you need to do is take a page outta the doctors' playbook and mix it up. Tails, you mess with Rock's lemon shooter--
Mega Man: For the last time--they're not lemons!
Sonic: --And make it so that he can use the Spin Dash blast that turns our friends back to normal without needing me there to do it.
Mega Man: You can do that?
Tails: *Grrk!* I'll do what I can, I'm kind of a genius. But what about you, Sonic?
Sonic: Me? I'll buy us some time.

Dr. Wily: Let's leave them to their work. We need to get back to the Wily Egg.
Dr. Eggman: What? Why not take pot-shots at them while they're busy?
Dr. Wily: Because until Proto Man is dealt with, we need to be in position to coordinate our forces. And I've had quite enough of him ruining my plans at the last minute.
Dr. Eggman: Ahhh, he's one of those types. Did I ever tell you about this one lackey I had...?

Tails: Vector's main traits are being strong, loud, and, uh, owing money. What kind of weapon would he give you?
Mega Man: We're about to find out!

Sonic: Dude gets an arsenal handed to him, and his first thought is how he can use it to save MY friends. How...
Tails: Noble? Endearing?
Sonic: Corny.
Tails: You're jealous.
Sonic: Of what?
Tails: He's cool, heroic, but doesn't have an ego the size of the moon.
Sonic: Ego? EGO? I just know I'm awesome, that's all!

Cover pencils, from Sonic the Hedgehog/Mega Man: Worlds Collide Volume 2: Into the Warzone. 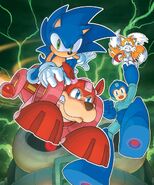 Variant cover, raw.
Add a photo to this gallery