“Olympic Trials”: It’s a special event issue in honor of the Summer 2012 Olympic games! Sonic and his friends are preparing for the ultimate contest of sportsmanship, but Dr. Eggman plots from the shadows to take more than the gold! All this plus an exciting bonus story featuring Sonic the Hedgehog and Team Fighters!

In Another Time, In Another Place, Tails is shown hanging banners, wondering where Sonic is. Right on cue, Sonic comes running in, sliding under and leaping over hurdles on the track to make an impressive entrance. The two friends high five, and Sonic notes with curiosity the Olympic Banner with the five rings-particularly the Power Ring-like gold ring. Tails asks his friend if he is okay, and Sonic replies that he was just daydreaming about the rings he is going to win. Tails corrects him and says that Olympic competitors win medals, not rings. Unbeknownst to the pair, they are being observed by a trio of officials who are in fact Dr. Eggman, Orbot and Cubot. Eggman, with his mustache tied to resemble a beard, gloats that Sonic will fall into his trap, prompting Orbot to remind him that they have set several traps, including in events that Sonic isn't supposed to be taking part in. Eggman replies that his traps are intended for Sonic and all of his friends as well.

Elsewhere, the Chaotix are shown practicing for the rowing competition, Charmy attempting to set a rhythm for his partners but annoying Vector by creating a sing-song beat. Espio notes that something is off about their craft just as Vector turns to pounce on Charmy, only for the trio to become encased in a metal shell that emerges from their boat. Elsewhere, Knuckles is competing in the hammer throw along with Silver and Big, and warns the pair not to get too close to him as he swings. As he begins to swing, metal coils shoot out of his hammer handle and wrap around his wrists, so that the flying hammer carries Knuckles with it, knocking him out cold as both of them plow into the ground. Silver cries out in concern, only for his own ticking hammer to explode and send him flying, while Big is knocked unconscious by a cloud of gas from his own hammer.

Amy Rose, Blaze, and Rouge are then seen taking part in a hurdle race, only for several of the hurdles to turn into teleporter traps that ensnare the three girls. Cream and Marine, watching from the sidelines, realize that something is amiss and decide to go warn Sonic and the others, though Cream is forced to assist Marine after she jumps a railing only to find that it's too high up for her to jump from. Meanwhile, Sonic and Shadow observe as Tails goes for the long-jump, with Sonic admonishing his rival not to cheat. Shadow claims that Tails used his namesakes for his jump, which Sonic denies. The pair are interrupted as Marine and Cream arrive, informing them of Eggmans traps. A pair of massive Caterkiller like robots appear on either side of Tails, and the Fox is sucked into one before the Hedgehogs can save him. The two manage to take out one of the robots, but Shadow is drawn into the other before it burrows underground.

Eggman, Orbot, and Cubot reveal themselves, the robot pair grabbing Cream and Marine while Eggman gloats over his successes. Claiming that he has already won, Eggman is reminded by Sonic that he has captured Sonic's friends before only to have Sonic free them. Sonic also points out that they are in the Olympics, and asks Eggman where his "spirit of competition" is. Eggman is confused, as he's already captured Sonic's friends, but Sonic then challenges him to an Olympic face off, winner takes all. Eggman agrees, but claims that he is unable to compete himself and substitutes in Metal Sonic. The pair engage in a series of events: discus, javelin, archery, weight-lifting, basketball, swimming, boxing, rowing, and various gymnastics.

Finally, the competition comes down to the last event: the Hundred Meter Dash. However, Sonic is clearly wearied by his participation in every Olympic event in a single day, prompting Eggman to gloat. Sonic wishes that he had a ring, and then sees the Olympic Banner he had noted earlier. Touching it, he is empowered with the spirits of "hope, friendship, unity, peace, and competition" which together are "the Olympic Spirit!" Rejuvenated, he easily defeats Metal Sonic and frees his friends from the Prison Egg at the end of the track. While Eggman and his cronies contemplate escape, Tails congratulates his friend and asks if he's going to sit out the real Olympics after all his effort. Sonic replies in the negative, citing the fun he had participating and noting that there's "No way I'm waiting four years to do it again!"

Team Fighters find themselves engaged by Egg Swats riding flying Turtloids as they continue pursuit of the Death Egg Mark 2. Sonic and Amy each leap from the Tornado to knock robots off their vehicles, Amy commandeering one as she continues to battle. Tails then has T-Pup lock onto the Egg Swats, shooting them out of the skies. Sonic rejoins the plane while Amy continues to fly on her seized Turtloid, Sonic remarking that they need to help the Echidnas down in Albion. Noting the smoking city, Sonic muses that Knuckles is not going to be happy about the situation.

Meanwhile, in Haven II, Knuckles works on getting various computer systems back online with Nicole's help. Nicole informs him that the communication channels are working fine, much to Knuckles' relief, as he isn't very tech-savvy. Nicole then questions him about his decision to repair the defunct base, given his known dislike of technology which was only amplified during his time as Enerjak. Knuckles apologizes again for the incident, remarking that while he prefers simpler methods, having half the Chaotix out looking for Mighty and Ray forces him to get additional help. Nicole agrees, and thanks him for his trust in allowing her to help, but then interrupts with news that another signal is coming in. A garbled message comes through, enough for Knuckles to learn that Remington is calling for help, as the settlement in Albion is under attack. Knuckles briefly reflects on his people, whom he feels he has failed and betrayed, but quickly reminds himself of his Guardian status. With that in mind, he pulls out a Warp Ring in order to "rally the girls" and go to Albion's aid.

Blaze is shown running with an Olympic torch in hand and a laurel wreath on her head, when Momma Robotnik suddenly pops up in front of her. Startled, she trips over a log and drops the torch into a nearby puddle before falling in herself, while Momma Robotnik looks on with glee. Realizing that the torch has gone out, Blaze frantically tries to relight it by snapping her fingers and using her pyrokinesis like a lighter. Below this last panel are the words "Inspire a Generation! 2012 Olympic Games!" 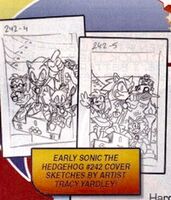