to Cindy Chau and Judy Gilbertson at SEGA Licensing

"Genesis" Part Three: The most talked-about story in Sonic comic history continues as Sonic brings a curious new face into his adventures: Miles Prower, the boy genius! As Sonic and his friends continue the good fight against the evil Dr. Robotnik, the perils get more perilous, old memories begin to resurface, and the Death Egg orbits. Don't miss the penultimate issue to this anniversary special event!

Sonic meets Tails at the Emerald Hill Zone and introduces him to the Freedom Fighters. Boomer and Tails instantly realize their shared interest in mechanics and marvel at the Tornado. Sally tells Sonic that after looking at a computer before they left the Scrap Brain Zone (Sonic the Hedgehog #227), she learned that Dr. Eggman's production plants are still running and that he is probably still alive. Suddenly the worse earthquake tremor yet hits. The group decides to find Eggman before Mobius "shakes itself apart". Sonic wishes to just find Eggman and fight him, but Sally decides to try and cut off his infrastructure and support, much to Sonic's dismay. Tails excitedly wishes to join them, but Sally thinks he is too young. However, Sonic claims to have taught him how to handle himself and they all head off to Eggman's next factory.

Dr. Eggman and Snively are aboard the Death Egg preparing phase two of their plan, despite not remembering what phase one was exactly (Sonic the Hedgehog #225), except that it drained their power supply. Snively informs Eggman that between the factories and the seven Chaos Emeralds they found, the station was quickly recharged. Eggman is pleased and says when the Death Egg is recharged, he can roboticize the entire planet in one shot. And since they have time to spare, Eggman works on a puzzle about the unpredictability of Sonic. Snively wishes to pay attention to the Freedom Fighters and the "dimensional disturbances" (a series of earthquakes). He also reveals the earthquakes to be the result of a space-time collapse, reality being stretched and fighting to snap back. Eggman is unconcerned; he is more preoccupied with his logic puzzle. When Snively reminds him once more about the Freedom Fighters, Robotnik assures him his "facilities are ready... for uninvited guests".

The Freedom Fighters arrive at the Chemical Plant Zone. Sonic is excited and Tails wonders what Eggman is using all the fuel for and he and Boomer begin to theorize, much to Antoine's annoyance. They face a problem in the fact that the place is huge, but Sonic decides to go through the pipes to find where to go and races Tails. At the end, he playfully accuses Tails of cheating by following him and it is revealed that the rest of the group found an elevator. Soon they find shifting yellow crates in the air that they use to go higher, though Sally is becoming suspicious of how convenient it all seems. Antoine wishes to be careful, since last time he nearly drowned (Sonic the Hedgehog #227). Then another earthquake hits and the entire room begins to fill with Mega Muck. They rush up the crates and make it to safer ground, during which Sonic and Sally have a slightly romantic moment. After this, Sonic wishes to destroy the plant and find Eggman, but Sally still wishes to cut off his supply lines so they do not have to deal with him repeatedly. Sally warns Sonic not to get ahead of himself or someone will get hurt, and at this, Sonic has a flashback (Sonic the Hedgehog #225) (a sign his memory may be returning) and decides to go to straight to Eggman with Tails, while the Freedom Fighters decide to continue going to bases.

In the Oil Ocean Zone, Sally leads the Freedom Fighters to continue their quest to shut down Eggman's power sources. Boomer remarks to Sally that they should have made a more of an effort to keep Sonic around for his abilities and Sally sadly agrees. Suddenly another earthquake occurs and puts the group in a panic to end Eggman's plans, unaware that a shadowed enemy is watching them.

Sonic and Tails are in the Metropolis Zone, Tails thinking it would have been better if they had back up, but Sonic believes it's better this way. Sonic reassures Tails that he'll beat Eggman and takes a radio so he can keep in contact with him before he jumps into a building to confront Eggman.

Sonic is laughing at Eggman's newest creation, which involves balls floating around his Egg Mobile that hit Eggman on the head. Sonic continues laughing at Eggman as he tries to tell Sonic "to face his doom", but continuous gets hit by the balls interrupting his speech. Then he orders Sonic to stop laughing and destroy this machine.

Boomer: You've got an F1 with a 9B nine-cylinder rotary engine!
Tails: Yeah! It's Sonic's, but he let me take care of it for him!
Boomer: Oh man! Waitaminute! You added a high-bypass turbofan engine?!
Tails: Well, Sonic does prefer to go fast. And it wasn't too hard to connect the fuel lines...
Boomer: And you're how old?!
Sonic: Totally called it. They'll be like this for hours.

Sally: That was the worst tremor yet. If Eggman is behind them, we need to stop him before the entire planet shakes itself apart!
Tails: Are you going on another adventure, Sonic? Can I come, too?

Eggman: Yesss. Once fully powered, I will be able to robotize all of Mobius in one shot! Since all we have to do is wait for total victory, I have plenty of time to work on this little "Chaos in the Equation" logic puzzle.
Snively: Sir?
Eggman: The unpredictable, Snively. The quantum variant. The unexplainable hiccup in the soundest of plans... The hedgehog...

Antoine: Are we trying to stop ze madman's schemes, or are we putting together ze fanning club for him?
Sonic: Cheater! You followed me up here!
Tails: Ha ha! No I didn't!
Sally: Y'know, you could've waited another minute, gone around the bend with us, and found this elevator.
Sonic: Yeah, but where would be the fun in that?

Boomer: Go on ahead! I'll swim to the top!
Sally: I'm not leaving you behind!
Sonic: Somebody call for a--
Boomer: (being send into the sky) WHOA!
Sonic: --rescue?
Tails: I was coming back for you, y'know?
Boomer: I thought I'd save you the trip...?

Sonic: That tears it. We shut this place down, then find Eggman and teach him to try and trap us!
Sally: I want this to end quickly, too, but it's like I said earlier. We have to cut his support lines, or we're going to be dealing with him over and over again. If we rush in, somebody's going to get hurt.
Sonic: Fine, have it your way. You go to the bases. I'M heading for the big man.
Sally: So that's it? You're just walking out on us?!
Sonic: I don't walk. I run. It's been fun guys. Later. (leaves with Tails)
Antoine: I am confus-ed. Were we just dumped?

Sally: Let's shut this place down, guys. (walks off)
Boomer: Smooth, 'twan.
Antoine: What? That is what you are calling it when someone walks out on you, non?

Sonic: Don't sweat it, little bro'! You just keep the Tornado safe while I ruin Eggman's day! Then we'll fly off to our happily-ever-after. Now-- to handle the doc while everyone else is at a safe distance. Ready or not, Eggman! Here I come! 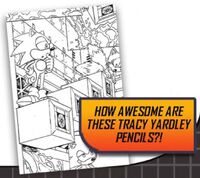 Artwork of the cover of Sonic the Hedgehog #228 by Patrick Spaziante.