“Hedgehog Havoc, Part One”: It’s the story fans have wished for for years: all your favorite hedgehogs together in one pulse-pounding epic that spans New Mobotropolis, Moebius, New Megaopolis and more! You’ll thrill to the excitement as Shadow, Amy Rose, Rob O’ the Hedge, King Scourge, Metal Sonic, and of course, Sonic the Hedgehog collide in this explosive tale that finds Scourge accelerating his assault against the Freedom Fighters and his hated enemy, Sonic. You simply cannot afford to miss this-after all, the outcome could result in long-lasting ramifications that could change everything forever!

This story begins with Nicole and Charles telling Bernadette and Jules, the parents of Sonic the Hedgehog, about Scourge and the Suppression Squad invading Freedom HQ, while Sonic and Amy went to Moebius for reinforcements. Charles then stated that Sonic probably had everything under control, yet he didn't know how far from the truth he was.

Over in Moebius' Castle Acorn, Rosy went ballistic, trying to kill all the "Hedgies" with her version of the Piko Piko Hammer. Rosy carried on, taunting Scourge that he remembers her, while Sonic joked about Rosy and Amy being very common, which angered Amy. A laughing Sonic then sent Amy to check on Buns in the damaged Omega Care Unit. Amy offered to go get Dr. Kintobor for help. Buns, complaining about being damaged, declined the offer, and flew off to the good doctor herself, telling Amy to get revenge on Rosie for her. Amy, watching Buns fly off, prayed that things would not get worse.

Back on Mobius-Prime, at New Megaopolis, Dr. Eggman and Snively were working on building the latest version of Metal Sonic, of which the recent model was destroyed in battle with Sonic, Scourge, and Metal Scourge. Snively rudely remarked on Eggman's way of thinking, which Eggman completely ignored and told Snively to go get engine part SXSU-401. Snively questioned why he doesn't use engine part STH-25, and the reason being that the SXSU-401 engine is capable of jumping zones. Once finished, Snively wondered if "she" had emailed him back yet. Eggman proceeded to power-up Metal Sonic, and the doctor told Metal to find Sonic. Metal began searching zones for the location of Sonic, and was unsuccessful in finding him. He then jumped zones to expand his search. Eggman, not understanding, started complaining that it should've waited for his 'Command'. During this, Snively left for his workstation.

Meanwhile, at Never Lake, Silver had just appeared to Rob O' the Hedge and Mari-An, asking them where he can find Sonic. Rob'O told Silver that he'd probably be at New Mobotropolis, and more specifically, Freedom HQ, yet they're on the other side of the ocean. Silver then smirked, and pulled out a Super Warp Ring. Mari-An and Rob'O said their good-byes, and Silver explained how to use the Super Warp Ring.

Back at Freedom HQ, Sally and Alicia continued to fight about Sonic and Amy being trapped on Moebius with Scourge. The Freedom Fighters and Suppression Squad went on, and in the middle of the fight, the Super Warp Ring appeared between Sally and Alicia, and Rob'O and a seemingly curious Silver climbed out. Sally asked what Rob'O is doing there, who responded by apologizing to Sally about intruding, and asked where to find Sonic and his cousin, Amy. Sally started to explain the situation, but Miles, began boasting. Silver remarked, "Moebius, you say?" while observing the Star Posts. Sally asked Rob'O who the strange person is. Rob'O told Sally that he is Silver, but he doesn't know when he came from. He apologizes again, as he and Silver set off for Moebius. Afterwords, Sally ordered Tails to get the Star Posts up and running. Alicia then murmured, "5 more minutes. Sonic should have ground Scourge into the ground by then" to herself.

Back over on Moebius, Sonic, Amy, Rosy, and Scourge continued fighting, only to be disturbed by Shadow the Hedgehog, who had tried to used Chaos Control to get to the Special Zone, yet ended up on Moebius. Shadow asked why Scourge is wearing a crown. Explaining, Sonic asked Shadow to help him beat up Scourge, much to Scourge's dislike. As the three prepare to fight, Metal Sonic appeared, scanning the area. Sonic rudely asked Scourge if this evens the odds, but he snarlingly replied, "No Metal Scourge? I'm insulted." Shadow began to reply, but is cut off by Silver and Rob'O appearing front and center as Amy and Rosy ran in. After realizing who's there, everyone began fighting, excluding Silver.

Amidst all the action going on, Silver continued to try to figure out which of the many hedgehogs is Sonic. He tried asking everyone who Sonic is, but is ignored by everyone, as they are too busy fighting another. Rob'O was fighting Metal, Amy was fighting Rosy, and Sonic and Shadow were fighting Scourge. After he had enough, Silver used his telekinetic powers on everyone to get their attention. Silver began to tell them who he is, only to be cut off by Sonic. Silver angrily continued, saying that he came from "the future, to find and destroy this "Sonic." Sonic and Scourge pointed fingers at one another, saying that the other is Sonic. After recognizing Metal Sonic and using the comparisons between the robot and Sonic, Silver figures out Sonic is "Sonic." He called him a traitor, throwing him against a wall. Rob escaped the ESP powers, and held his bow and arrow to Silvers head, telling him to stop attacking Sonic and give an explanation. As Amy helped Sonic up, Silver started telling Rob that a legendary Freedom Fighter from this time betrayed the others, dooming his (Silver's) future. Apparently, only Sonic is known to have that power in the future. Rob scolded Silver for being so naive, and told him to not live life on legend alone and that Sonic is famous for being a hero. Silver stood and watched in dismay as Sonic protected Amy from an attack by Rosy.

Scourge then attacked Rob by surprise and pulled Rob's hood over his head, stating that the Rob's opposite had already been taken out by his brother. Scourge then attacked Silver, mocking him about his hair. Rosy complimented Scourge for being so mean as she tried to attack him, though he responded by panicking. Amy attempted to defend Rob'O as Shadow defended Sonic from Metal. Shadow complained about not knowing who to attack and who to defend, but Sonic devised a plan for this.

Sonic convinced Metal, Silver, and Rosy to attack Scourge, along with the rest of the hedgehogs. They all agreed, and surrounded Scourge. Scourge began complaining and revealed that he had a plan. Scourge made a run for it as everyone chased after him. Sonic, Metal, and Shadow caught up with him in the throne room, and Sonic succeeded in knocking Scourge into his throne. Scourge then claimed that the throne is filled with Anarchy Beryl, the same thing the Chaos Emeralds are made of. Scourge then used them to transform himself into Super Scourge.

Sonic: Obsessive, hammer-happy, can't take a hint. I'm having trouble telling you apart.
Amy: Keep it up, cutie, and I'll smash you for her.

Amy: Rob?
Rob: Dear cousin!
Sonic: Whoa, okay! Who's the new guy?
Silver: So... Which one is...?
Metal Sonic: >>Multiple contacts. >>Identifying. >>Prioritizing...
Shadow: How many more...
Rosy: So many hedgies to smash!
Scourge: Everyone get out of my castle!

Shadow: Why does he have a crown?
Sonic: He conquered this world and tried to invade Mobius. Since you're here, do you want to help beat him up?
Shadow: ...Sure.
Scourge: Dude! Weak!

Silver: I've journeyed from the future to find this "Sonic" and destroy him.
Sonic and Scourge: (point to each other) He is.
Scourge: You coward.
Sonic: Okay, it's a technicality, but still... 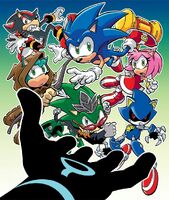 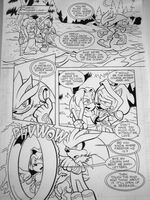