“A Bold New Moebius Part 1: Unwelcome Guests”: The Freedom Fighters face an unexpected challenge when the Suppression Squad drops by… and they haven’t come over for tea! Meanwhile, Sonic, Knuckles and the Chaotix are in New Megaopolis keeping Eggman’s New Dark Egg Legion at bay. Includes an appearance by Anti-Rotor, now known as “Boomer” – a name that will be familiar to long-time Sonic comic fans!

In Freedom HQ, Miles "Tails" Prower asks Rotor Walrus about the Star Posts, which suddenly activated by themselves. Rotor says he doesn't know how, since they were only meant to travel to the Special Zone. A sonic blast suddenly emanates from the portal, knocking Tails and Rotor away. As they struggles to get up, Rotor finds himself facing his anti counterpart who introduces himself as "Boomer." Boomer places a few taunts on Rotor and Tails prepares to attack Boomer when he gets attacked by his own anti counterpart who introduces himself as Miles, brushing off his old nickname. Princess Alicia then walks through the Star Posts and she tells Patch to tell her "highness" that the area is secure in a sarcastic tone. Fiona says she heard and that Alicia should watch her tone. She then tells the Suppression Squad to press forward.

Meanwhile, in New Megaopolis, Vector the Crocodile tells the Chaotix to press forward as they are quickly running through the Dark Egg Legion. Sonic then asks Knuckles if they really needed him since the "Dark Egg Legion is a joke." Knuckles is in no mood for jokes and says that's because he's responsible for them. While they continue to attack and evade attacks from the new legion, Sonic tries to reassure Knuckles that it isn't his fault, with Knuckles saying he has to try something. He then said he needed to get to Lien-Da and asked for cover.

Back at Freedom HQ, Alicia asks Patch to cover her since there are more Freedom Fighters. He reassures her that they are no threat, but he was suddenly surprise-attacked by Amy. Amy chased after the fleeing Patch while Bunnie captured Alicia. Alicia then attempts to shake Bunnie off but was unsuccessful until Boomer attacked the cyborg Mobian. Alicia was then confronted by her prime counterpart. In the lab, Fiona started to head to the door when she was stopped by Antoine. He asks her what she was doing but she said it was the same thing he was doing, going after the "lady in charge."

Sonic attacks a Dark Legionnaire as cover for Knuckles while he attempts to get to Lien-Da. Another legionnaire attempts to shoot Knuckles, but is stopped by Mighty. Knuckles then glides up to Lien-Da in her hover pod. He then tries to dissuade her from working with the Eggman Empire, but she refuses, stating that the Guardians never knew what was best for the Legion. She then yells at Snively for reinforcements but Snively says that they are the standing army now, forcing Lien-Da to fall back. Vector then states that the area is secure and wonders what the second team is doing. Julie-Su checks in with Saffron, who says that the boys have set all the charges and says if they blow the tower up, Doctor Eggman won't be able to make contact with half of Mobius. Julie-Su says they should pull out and meet at the rendezvous point, but Saffron states they are going to need back-up as the Dark Egg Legion approaches the tower.

As Sally and Amy dodge a blast from Boomer, Sally states she needs cover so she can call Sonic back to Freedom HQ. Boomer makes ready to attack Sally but is forced back by Bunnie. Patch and Antoine clash as Sally goes to the microphone, but she is stopped by Fiona. After a snide remark from Fiona, Sally smirks at her, stating that she's part of the cover, to Fiona's shock. At the microphone, Rotor tells Nicole that they need Sonic back at Freedom HQ immediately.

Sonic gets the message as Julie-Su explains what's happening at the tower with Sonic adding that they need him back home. The Chaotix reassure Sonic they don't need him and he leaves for home just as a craft flies into the ruins, much to the Chaotix's surprise. Lien-Da says the gesture is a little late but Dimitri emerges from the craft, says he came of his own accord. Despite Lien-Da's misgivings, Dimitri states that as Grandmaster, he can't watch his people fail and he's taking over, as he gets into an insect-like exoskeleton. He then sends an uplifting rally for the Legion, leaving Vector to believe that sending Sonic back was a bad idea.

Rotor: A-Anti Rotor! Wha-
Boomer: It's Boomer now, wuss. Scared that your "shadow" is outshining you?

Tails: Anti-Tails!
Miles: Don't you dare call me that! You may lack self respect, but I only answer to Miles!

Patch: Ma Princess, you worry too much. These arbutis are no real threat. (is attacked by Amy) Mon dieu!
Amy: You've got a lot of nerve coming back here after all you've done!
Amy: (runs after Patch) Come back here so I can smash you!
Patch: La fille est une monstre! (Translation: The girl is a monster!)

Dimitri: Listen up, my Dark Egg Legion. The enemy surrounds us and would destroy a key outpost in out benefactor's city. Do not hesitate to fire upon your own kind. They have abandoned us. We shall stop them here and now!

Fiona: Sorry, hon, but I think you need to speed up your grand entrance!
Scourge: (as he enters Freedom HQ through the portal) Attention to all the scrubs of this zone: the king has arrived. Respect. 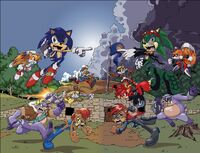