“Beating the House Part 1”: Sonic is ambushed and captured by the Destructix, and it’s up to the Freedom Fighters to find and rescue him! The trail leads to a dingy dungeon beneath a flashy casino owned by Mammoth Mogul – but just how real a threat faces our heroes this time? The con is on in this tale of twists, turns, takes and double-takes!

Sonic the Hedgehog recounts his current situation, thinking "I'm in a dark and smelly place with guys that hate me." He tries to remember how he got there. He remembered Sally convincing Bark and Bean to fight for them, hearing Nack's voice and Sally's. He puts two-and-two together and immediately tries to get out of his chains, but Sergeant Simian says he's not going anywhere.

Meanwhile, the action returns to where the last issue left off, with Sally fleeing to Freedom HQ and Nack continuing to countdown. Just as Nack shoots his shot, Sally flips up the cover to the Oak Stump Slide, making him miss. Sliding down, Sally meets Amy who asks "who's shooting holes in the front door?" Sally explains that Sonic had been taken, and Nack is after her. She wonders who's here but Amy says she's the only one. Sally accepts that they'll have to do. Nack took the slide down and found Sally near the front door. However, Amy was waiting for Nack and launches his him out the door with her Piko Piko Hammer. They headed into the command room and Nicole asked what was going on and Sally states they're fine. Sally again explains that Sonic is captured. Nicole tells her if she can have a little time, she could rally the Freedom Fighters. Sally insists there is no time and she and Amy leave on the hovercraft to rescue Sonic.

Sonic, however, is facing a bit a of verbal abuse from the former members of the 6S team in the Bottom of the Barrel Bar 'n' Grill. It's been so long that the members themselves have forgotten what the 6S' stand for. Sonic comes up with the team name easily and tells them they are way out of his league now. Sleuth "Doggy" Dawg, impatient, asked what was taking Mammoth Mogul so long for him to pay up. Coconuts stated Mogul has a casino to run and that he will pay them on his time. Drago Wolf started to say something but Sleuth cut him off. Sleuth reminded him the Freedom Fighters have a bad habit of showing up at the last minute. Coconuts goes to inform Mogul but reminds them their job was to bring him Sonic and keep him there.

At that moment, Sally and Amy arrive at the casino and Sally says this definitely wasn't how she remembered it being described as. Amy asks if there in the right place, to which Geoffrey St. John appears and says the ladies are in the right place. Both girls are surprised to see Geoffrey there and ask what he was doing. He explains Elias Acorn sent him in order to figure out what Mogul was up too. Sally asked if Hershey was with him, to which Geoffrey said G.U.N. heard of their relationship and assigned him with Rouge the Bat, much to his dismay. Rouge appeared right behind Geoffrey and scared him, then she asked Sally what she was doing here. She told her Sonic was kidnapped and they think Mogul is behind it. Rouge told the group that she and Geoffrey know where to look and led them to the Bottom of the Barrel Bar and Grill. They immediately attacked, saving Sonic from having to put up with Bean's remarks. Geoffrey asks Rouge if she would join in but she denied, on the account of her dress. The group then proceeds to take out the Destructix and the rouges, with Scratch and Grounder hiding from Amy and her Piko Piko Hammer. Rouge stopped Sleuth from leaving and told him Mogul paid her already and told him of a new plan...

Sonic, pleased with a rescue well done, wishes to complain to the management. Sally agrees but Geoffrey reminds them that they are still on Mogul's turf but Sally says that they can't be bullied here when they could be attacked at home. So Sonic goes up to the Casino and shouts for Mogul to appear. A few SWATbots as security asked Sonic to leave but he and Amy quickly disposed of them. Mogul appears and asks why Sonic is attacking since his business is concluded with him. Sally asks about the bounty but Mogul waves this off and asks a fleeing Sleuth what he was doing. Sleuth said that they were using the bar for a front of mercenary actions. Mogul expels him from the casino but Sonic interjects that that's not how it was. Mogul asked how they could counter a full confession to which they weren't able to. He then says that if they came to them, he would have helped. The heroes leave in humiliation. Drago then asked why Sleuth confessed but he said Mogul would pay for Sonic's humiliation.

Geoffrey then cheers up the group saying they got out safely. Sonic also congratulates Sally for rescuing him and when Amy objects, he thanks her as well. Bunnie contacts the group and says that while the HQ is safe, Nack got away. For how the day has been, Sally is not surprised. Sonic said this was an eventful day and on the plus side, "Today can't get any worse."

Meanwhile, in Moebius, Fiona Fox is talking to Anti Tails and Anti Rotor asking if they are done yet. They told her they would be on time. She said they better. She then moved to Anti Sally and Patch asking if they were ready, to which Anti Sally muttered "More than you'd ever be." The ladies clashed over this but Patch settled things down. Anti Sally said they'd be ready. Scourge asks if everyone is ready, and Fiona replies they are at his order, "you're majesty".

Bean: Hey Sonic? Hey. Hey Sonic? Why are you so fast? Why are you blue? Are you and the princess going to marry and have mutant hedge-squirrel babies?
Sonic: (looks shocked) 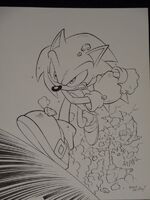