“Mister Popular”: Sonic’s immortal enemy Mammoth Mogul is back and their battle has taken on a whole new twist. Can Sonic find out who or what Mogul is going after? With hordes of villains from today as well as from Sonic’s past emerging to attack the blue blur, does Sonic have a chance of defeating the massive power of Mammoth Mogul?

Rouge the Bat and Geoffrey St. John are at Casino Night Zone, with Rouge trying to loosen St. John up, reminding him they are here for a good time and they're best looking couple there. Geoffrey's replies "Don't tell my wife that." Scratch comes over to provide some concierge, saying "What happens in the Casino Night Club, stays in the club". He greets Mammoth Mogul as appears behind the twosome. Mogul welcomes them to the Casino and they chat about the Casino's renovation and the relocation of the Bottom of the Barrel Bar 'n' Grill. Coconuts comes to tell Mogul his investor meeting is ready, to which Mogul leaves. In the Grill, Mogul meets with Sleuth "Doggy" Dawg for the Destructix, Nack the Weasel, Bean the Dynamite, and Bark the Polar Bear.

While the conspirators chat, Coconuts, who is Mogul's personal butler, talks to the Grill's chief: Grounder. They discuss how they got here, with Coconuts reflecting on his survival from The Island of Misfit Badniks and that his plan for world domination was crushed by being hired by Mogul. Grounder, however, says Coconuts is lucky he gets to work directly for the boss. Mogul is then seen proposing a deal with the rouges, in the meantime. He requests they mercenaries bring Sonic the Hedgehog to him, dead or alive.

Sonic is currently in part of a ritual to remove evil spells, as performed by Merlin Prower. He, Knuckles, Tails, Mina Mongoose and Mighty observed as the "light show" was completed and spells were removed. Knuckles thanks Merlin for getting "a load off my mind". Sonic states he was never "cursed" and he shouldn't have been part of the ritual. Merlin responds that Dr. Finitevus' Hex was so powerful Sonic shouldn't have been able to turn super to fight Enerjak. He wanted to make sure he had no ill effects because of the Hex. Sonic questions why he wasn't affected then, leaving Merlin to say it's a mystery and he's on to his next order of business. Tails didn't want Merlin to go, but was reassured by Merlin, and asks his love to be sent to Tail's parents. Sonic comforted Tails, and tells him that if he needs anything, he'll be in the Great Forest, since Sally Acorn wanted to meet him there.

Sally and Sonic looked over the ruined Knothole Village, with Sonic saying he wishes he had done more. Sally tells him saving all of them was more than enough. Sonic asked why she wants him here, to which Sally explained she doesn't want to be in the Great Forest without another Freedom Fighter, as they spent their childhood living and defending it. The two remember the changes the Freedom Fighters have gone through, with Sally regretting she didn't transition smoothly to them. Sonic reassured no blames her for actions. Even when Sally brought up her "outburst" at his homecoming, Sonic told her she is still her friend.

Before Sally could get a few more words in, their heart-to-heart moment is interrupted by a bomb. As more bombs rained within the area, Bean and Bark stormed into the clearing. Sonic told Sally to get to safety while he took on the duo. He took on Bark in a one-on-one fight while Sally manages to trick Bean to have a bomb detonate in his face. Sonic compliments Sally's trickery, but while distracted, is punched off a cliff by Bark, landing in the middle of the Destructix. Sonic asks where Fiona and Scourge went. Dawg tells them they bailed "after the Enerjack mess" and they can handle him without them. Sonic then utilized one of his oldest tricks; when the Destrutix box him in, he ran around in a circle to create a small tornado. Getting cocky, he forgot about Predator Hawk and was attacked by him. The rest of the Destrucitx converged on him, attempting capture. Sally, witnessing this, and realizing she can't leave Sonic alone manages to convince Bean and Bark to help them out.

With their assistance, Sally and Sonic quickly overtake the Destructix, but Sleuth says they have one more trick up their sleeve. In the bushes, Nack gets a shot on Sonic and stuns him. Sally attempts to have Bean and Bark help out once more, but Bean replied since they 'goofed' her job, they "might as well get paid for Mogul's". Nack tells Dawg he has a score to settle with Sally and stays behind. Sally tells him she is not gonna beg. Nack says that's not what he wants and tells her she has 10-seconds before he zaps her. Sally runs to Freedom HQ for help as Nack starts counting.

Sally: A BOMB?!
Sonic: I swear, the timing of these things...

Bean: Yeah! Give him a left! And another! And no dessert after dinner! 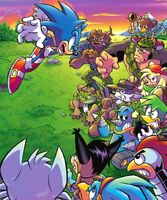