to Robert Leffler and Dyna Lopez of Sega Licensing

"Order and Chaos: the Gathering Part 2 of 2": A Sonic battle that has been building for ages comes to its penultimate chapter. With Sonic's father and closest allies in the Freedom Fighters out of commission, it's left to Super Sonic, Super Shadow, and Turbo Tails to help save the day. But how do you defeat an enemy so evil that they don't even have an identity! That mysterious enemy, simply known as "Anonymous" hopes the answer is "you don't!" PLUS!: "For a Friend": The Chaotix undertake a secret mission of revenge against Dr. Robotnik. But when the covert mission goes wrong, can even the stealthy Espio make it out alive?

Continued from last issue; A.D.A.M.'s master plan is almost complete with Tails and Shadow captured and Tommy Turtle as his slave. Sonic arrives on the scene in the nanite city, and sees his dad collapsed on the ground. Jules tells Sonic not to worry; that A.D.A.M. is done with him after he gave him Tails, and that he ordered him to self-destruct. Sonic doesn't think it's "no worries", but Jules adds on that he didn't get a deadline and would fall apart for another 40 years. Sonic answers back he'll have the day saved by then. Sonic is about to run into action, when Jules tells him that A.D.A.M. is using the Nanites in Tommy's shell to control him; the same way he used on Jules.

Back at the city, Sonic charges into A.D.A.M., when they were wondering when Sonic would show up. Sonic answers back wondering about "we?". A.D.A.M. tells Sonic during the fight Tommy is still alive inside him and completely under his control, just like Bunnie, Nicole and Jules. Sonic figures that Dr. Eggman's "son" would go all world-conquest-crazy with the nanites. A.D.A.M., while launching at Sonic, tells him once he fulfills his function his father will be proud of him. Dr. Eggman renounces A.D.A.M. as his son and shouts he'll be happier when Sonic tears him apart. A.D.A.M. says he knew this would happen and that is why A.D.A.M. tricked Eggman into destroying M. Sonic uses his legs to stun A.D.A.M. and is ready to finish him off, but Tommy appears in A.D.A.M.'s body. Sonic, not being able to attack his friend, stops. A.D.A.M punches Sonic, saying he knows Sonic could never hurt Tommy, and that is why he cannot be stopped. Dr. Eggman helps Sonic up and tells him if he is kept busy for a few minutes more, his Egg Fleet will destroy him. Sonic doesn't want to lose Tommy and decides to take it up a notch. A.D.A.M. also realizes that he needs to take drastic measures.

Sonic runs up the summoning spire as A.D.A.M. follows with his jets, Sonic trying to think of a good line to say. They both enter the Chaos powers, and Sonic transforms into Super Sonic to take down A.D.A.M, but is shocked that A.D.A.M. has gone super too.

As Super Sonic and A.D.A.M. are fighting, Dr. Eggman releases Super Shadow and Turbo Tails, and tells them A.D.A.M. has gained super-level power and Super Sonic can't take him alone, or his Egg Fleet. Turbo Tails realizes what must be done and asks Super Shadow to help him. They both fly up as Turbo Tails is explaining that this much power can't exist here and they must send it to a safe place. Super Shadow uses Chaos Control to open a portal to the Zone of Silence. Turbo Tails believes that this is the beginning of the Great Harmony and he can finally fulfill his prophecy, after he thought it ended when he faced Mammoth Mogul as Titan Tails. He uses his powers to send the Chaos Emeralds into the zone. Super Shadow wonders what could happen with all that energy, Turbo Tails answers that he hopes it's something 'special'.

A.D.A.M. notices the Chaos Emeralds have disappeared and Super Sonic tells him it's over with the emeralds gone and the Egg Fleet arriving. A.D.A.M. begins to say he is invincible in his super form, but Tommy manages to regain control of his body. He apologizes for everything, for being a pain, for all the trouble and for letting A.D.A.M. do this. Super Sonic doesn't worry about it and is glad that he's won back control. Tommy answers back that A.D.A.M. will win back control any minute, and he simply can't let that happen. Tommy wants A.D.A.M destroyed, so that everyone will be cured of their nanite infections. Tommy flies up to the Egg Fleet and tells Super Sonic since he gave him a second chance in life, he needs to repay that debt. Before anybody can stop him, Dr. Eggman commands the cannons to fire. Tommy is completely obliterated by the blast as Super Sonic transforms back into Sonic, with the dusted remains of Tommy.

Dr. Eggman complains that this was a waste of time, and he missed out on Chaos Emeralds, and orders Shadow to head back with him. Shadow is disgusted at his heartless comments, glancing back towards the crying Tails. Sonic floats back down to the ground with Tommy's remains. Dr. Eggman tells him he's letting Sonic go for now, and leaves with Shadow. Sonic comforts Tails that Tommy was maybe the bravest Freedom Fighter of all, and took A.D.A.M. with him. He lets go of Tommy's remains in the wind, trying hard not to cry, while Tails is in tears. Sonic and Tails decide to go and help get Jules and themselves home.

Vector is at Freedom HQ is in contact with Mighty and Ray. Vector asks why he can't get in contact with Espio, to which Mighty answers Espio wanted radio silence. Ray asks Vector where Charmy and Saffron are, Vector answers back that they're double-dating with Knuckles and Julie-Su.

Meanwhile, Espio arrives at Golden Hive Castle, where it has been transformed into a base for Dr. Eggman. Espio uses his invisibility to grab a robot guard and demands to tell him where the main computer is. The robot tells him the location and warns him it's heavily guarded. Espio then uses his shuriken to split the robot in two. Espio uses his stealth and invisibility to enter the computer room, where a robot is playing solitaire. Espio tells him to use the "Black five on the Red six" and then destroys the robot.

Espio connects Nicole to the computer where she starts hacking, as Espio is questioning Dr. Eggman's robot mechanics. Nicole answers back that Eggman would fill the void in his life with robots, because he's without Snively or any family. Espio plans to argue with her, but wants to know Nicole's status- she has gotten in. Espio asks her what happened to Charmy's family and kingdom, Nicole reporting back that there are no records on captives. Espio wonders why Eggman doesn't care how many lives he ruined, Nicole concludes Eggman only seems to care about the terror he brings to others. Nicole finds the Kingdom scattered, and all of the Kingdom's holdings and structures have been converted to serve Dr. Eggman. Realizing Golden Hive Colony is gone, Espio doesn't want Eggman to have the area and asks Nicole to overload the power, disable the warnings and lock the area, and find him an escape route. Nicole says the other Chaotix would approve of such drastic measures. Espio answers back he's doing this for them and Charmy. Espio uses his ninja weapon to cut through the roof and uses his tongue to launch out as the base explodes.

Espio makes it back to Mighty and Ray as they are about to take off in a flying saucer. Mighty asks him what happened and Espio answers back that Nicole has all the downloaded data and will have it analyzed in time for Charmy and Saffron. Mighty says that's not what he asked about, but Espio interrupts and tells Mighty that Eggman hurt Charmy so he hurt him back.

Jules: No worries, son. A.D.A.M. is done with me now that I gave him Tails. He told me to go somewhere and self-destruct.
Sonic: "No worries," he says.

Super Sonic: Come on out A.D.A.M.! I'm ready to rip every last nanite of you off my friend!
A.D.A.M.: (emerges in his Super form) If you insist.

Tails: Tommy...
Sonic: ...was maybe the bravest Freedom Fighter of us all. And he took A.D.A.M. with him. 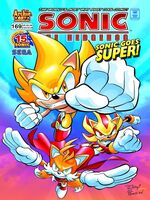