All good heroes have their own heroes, and this story tells the tale of the heroes Sonic and the Freedom Fighters looked up to. It's a tale of inspiration but also deception... the story of a traitor from within... and a potential warning for our heroes of today!

In perhaps the most emotionally charged chapter of the series so far, the story of Locke and Knuckles is explored. How will their relationship affect Knuckles' daughter, Lara-Su; Mobius, and the future of the Guardians?

Sonic and Hope Kintobor watch a Power Ring emerge from the Power Ring Grotto. The lake's caretaker heads off to take the ring to Rotor, charging Sonic with watching after the area while he's gone. Hope offers to watch the lake for Sonic if he tells her the rest of his story about the Original Freedom Fighters.

After several successful sabotage missions, the team learned that King Acorn had been banished to The Void. The group infiltrated Robotropolis, hoping to find the portal used to dispose of the king and rescue him undetected. As the crew prepared to enter the void, they found themselves ambushed by Dr. Robotnik and a group of SWATbots. Trey Scales revealed that he had betrayed the team at Robotnik's orders and leaked their plan for a share of Robotnik's power. Dr. Robotnik then threw Scales into the portal room with the other Freedom Fighters, activated his Roboticizer, and then opened the portal to The Void.

As Sonic finishes his story, Hope remembers that she needs to finish her history paper and runs to Knothole Library. Sonic tries to remind her about their deal, but ends up looking after the lake himself. Hope gives her report on Tig Stripe and the rest of the Original Freedom Fighters, pleasing her history teacher, Mrs. Stripe.

In the future, Lara-Su comes down to breakfast to find her mother and Sally sitting together, with her father conspicuously absent. Elsewhere, Knuckles makes his way through a forested area, contemplating what brought him to his destination instead of accompanying Sonic immediately to the shuttle-port. His thoughts are then carried back to when he took his mentor Archimedes to Downunda, where the Fire Ant was relocating so as to take up residence in the ancestral homeland of his people. Knuckles remarked that he couldn't understand the move, given Archi's life having been spent on Angel Island, which Archi countered with the desires of numerous Echidnas to relocate to Albion. Their conversation carries on to Knuckles' decision that the Guardian line should end with him, which the Fire Ant warns Knuckles might produce serious repercussions. After bidding Archi a fond farewell, Knuckles returned to the island, only to learn that his father Locke was in critical condition. Arriving at the hospital, he was informed by Dr. Shockra that Locke's condition was a mystery, and that their only hope for real answers would be an exploratory surgery that might even aggravate the matter.

Though worried, Knuckles agreed, and was informed afterwards that Locke was suffering from a carcinogenic pancreas, which the medical personnel could do nothing to treat. Diagnosing Locke as having nine months to live at most, Dr. Shockra also inferred that Locke's condition must have been caused by exposure to an unknown toxic substance. Knuckles and Lara were then admitted to Locke's room, where the dying Guardian took the opportunity to apologize to his ex-wife and son for all that he had put them through, and told them that he had realized that he had let his station blind him to what mattered most. Some time later, Locke died peacefully in his sleep, leaving Knuckles and Lara to mourn his passing. Knuckles' recollection comes full circle as he finds himself standing at Locke's grave site, noting flowers left by his mother. Ironically, Knuckles comes to the realization that in preventing Lara-Su from becoming a Guardian, he took her choices away from her just as his father did to him. With that in mind, Knuckles decides to let Lara-Su choose for herself, wishing that Locke could be there with him. Unbeknownst to him, both Locke and Aurora stand nearby, watching him with smiles.

A furious grasshopper, calling himself "The Verminator", complains at the editor about the fact that Charmy, Saffron, and Archimedes are the only prominent insect characters in the book. The editor thinks aloud that things like this are the reason why he never likes to talk about his job. 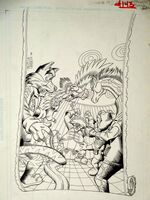