to Robert Leffler and Takuma Hatori at Sega Licensing

Return to Angel Island (Part 1 of 4): The Message

Sonic, Knuckles and the Chaotix go back to the magical island to find it a far worse place than last seen. Overrun by Robotnik, Dingos and the Dark legion, one can only wonder: have the Guardians faltered and can the island ever be the same?! Find out in this epic tale.

The popular "Mobius, 25 Years later" saga continues! When old, friendly nemeses sit down for what's supposed to be a cordial meal, it seems like there's less humble pie on the menu than steamed egos!

Return to Angel Island Part One: The Message

At morning in Castle Acorn, King Maximillian is scolding Sally and Sonic for going on a mission to New Megaopolis without his consent. Sonic tries to cover for Sally saying it was his idea, in which the king bluntly disbelieves. King Acorn admonishes Sally that she cannot be trusted to control an entire city while him and Queen Alicia are away if she takes such risks. Sally indignantly apologizes.

Sonic and Sally leave the castle and Sonic comments on how grouchy the king is, but Sally interrupts saying she doesn't need him to stand up for her. Sonic replies that he only did it because he cared, in which Sally angrily lashes out on him telling Sonic to stop caring. Sally gloomily states that they cannot be together; she needs a companion to stay by her side, not a heroine.

During noon at Fredrick's Airbase, King Acorn is announcing his departure for his and Queen Alicia's tour of Mobius, bringing Uncle Charles as science advisor and Antoine as elite guard commander. With that said, he bids the Mobians farewell and takes his leave. Later at Uncle Chuck's Diner, Sonic is dining with Tails, Knuckles and Julie-Su, complaining on how Sally is penalizing him by not letting him go into the field. Julie-Su admits that she was also pretty uneasy after Knuckles returned from the afterlife. Sonic adds that she doesn't care about Knuckles going into battle like Sally does with him. Suddenly, there is a crash at the entrance, revealing to be Charmy and Saffron. Charmy weakly pleads for help and the two fall to the floor, with Knuckles concerned for their help asks for a doctor.

With the two bees healed, Sally asks for an explanation at the castle for what happened to them. Charmy darkly remarks that they lost everything. He recalls that Doctor Robotnik sicced his egg pawns on the Goldenhive Colony. He says there were no survivors. Sally pities their situation and promises revenge on Eggman. A guard informs that they received a transmission on the Technolotree, assuming it is for Knuckles. The message reveals garbled information, saying Locke is being held prisoner on Angel Island. Knuckles angered by this wants to set out for Angel Island. Sally pleads for him to stay, thinking it may be a trap, but Knuckles says he has lost his patience and declares him and the Chaotix to go to Angel Island and shave his father, in which Sonic wants to take part in. Sally hesitantly agrees while constraining Knuckles to only save Locke, not to liberate Angel Island. Sally goes to say something to Sonic but Sonic cuts her off, thinking that she won't let him leave; he says that it is what he does and nobody can tell him otherwise. Sally lashes out and asks for a full report on his return. Knuckles impatiently scolds Sonic to just leave.

At nighttime, the ship is approaching Angel Island. Knuckles asks if Charmy is still feeling up to going on the mission with them. Charmy remarks that is he can get revenge on Eggman, he definitely will. Bunnie asks why she can't come along as well. Sonic arrogantly explains that they need some strength to protect Knothole while he's away. The group floats down with Sonic and Knuckles using parachutes landing in the Marble Garden Zone. The rest keep watch while Sonic and Knuckles bury their parachutes. Knuckles tells sonic to gather information, but before Knuckles can even finish his sentence, Sonic spots something devastating: a dingo concentration camp. Sonic leads them in a quick charge of the perimeter. Knuckles is being lynched by three dingo guards and Sonic tackles them. The group succeeds in defeating the group of Dingos. Knuckles suddenly finds a large group of Echidnas extolling him calling him Avatar. Knuckles is shocked by the crowd and sees Remington humbled with torn clothes calling him Avatar as well. Knuckles asks why he is being called that. Remington recalls how he was disbelieving when Knuckles came back from the afterlife, so he went to the Sky Sanctuary Zone verify, and say the Knuckles' coffin was empty. When Remington returned to Echidnaopolis, an invasion force took over Echidnaopolis when the Dingoes sold the Echidnas out for their own freedom. He was thrown into a dungeon for months and stated how he had faith that Knuckles would return. Julie-Su sadly retells of how the Prophecy of the Ancient Walkers states that a champion will bypass the afterlife and return hence to deliver the world from its suffering. With Knuckles already having lost most of his abilities, he doubts he is what they speak of.

In the Dingo City, Eggman impatiently asks if the prisoner has cracked under pressure, which General Kage responds that he has yet to. Eggman says he wants the master Emerald and commands Kage to make the prisoner reveal its location. Kage happily agrees. In the Lava Reef Zone, the group is searching the area for Locke knowing this is where the transmission originated. Ray timidly asks why the keepers of Locke would chose such an intense place. Vector reassures Ray that the Chaotix have achieved greater. The group notices the smoke rising and they see shadowy figures in the mist in which they find to be the Dark Legion.

Julie-Su and Sally enjoying the time that there two families are having together, while Sonic and Manic and playing volleyball against Sonia Acorn and Lara-Su. Sally admits she misses Tails and his family who have moved to Downunda. During dinner, Knuckles and Sonic are constantly arguing and devising their plan that Knuckles has been told by Rotor.

Pellerito tells Sonic that fans have been really happy about Tails' new, spiky haircut. Sonic explains that he understands why: he can use Tails' hair as a can opener.

In 2010, the toy company, Jazwares released this issue in a comic book/ action figure pack. Along with this issue, the pack consisted of Espio and Vector action figures. The comic itself is a reprint on the new glossy stock. It is also much thinner than the original because all the advertisements have been removed. Some of the advertisements were replaced with up to date ads for the comics and the Jazwares Sonic toys.

This comic was released in another comic book pack, this time with Espio and Knuckles instead of Vector. 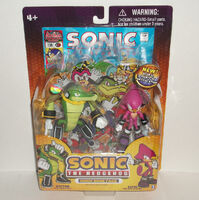 The main cover concept
Add a photo to this gallery